Because the First Time Was Not Enough: Hiking the Museum Trail at Plumas-Eureka State Park 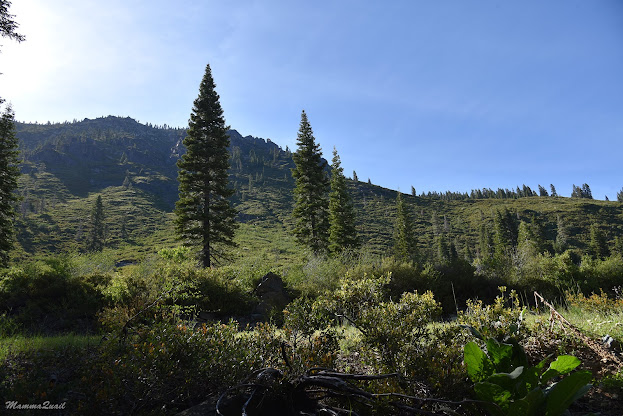 Date: June 21, 2020
Place: Plumas-Eureka State Park, Blairsden, California
Coordinates: 39.756551, -120.698020
Length: 3 miles in and out
Level: easy
The third weekend of June 2020 was the first time we could finally go on a family recreation trip since the COVID-19 breakout. The restrictions were lifted just enough for us to go an a camping trip with close friends to the north region of the Sierra Nevada range. We camped at Little Truckee campground and on the first full day of our trip we hiked to the Jamison Lake Complex from the Plumas-Eureka State Park. On the following day we went swimming at Davis Lake but when we were done with that there was plenty of daylight time still, so we decided to go back to Plumas-Eureka and hike another trail there, a shorter and easier one this time - the Museum Trail, from the park's headquarters to the park's campground.


I believe that the main consideration tipping the scale toward returning to this park was the elder chika's desire for another chance to see the McGillivrey warbler that eluded her the day before. Regardless, we were all on board with that choice and so we drove back to Plumas-Eureka and parked near the park's headquarters, where the Museum trailhead was. 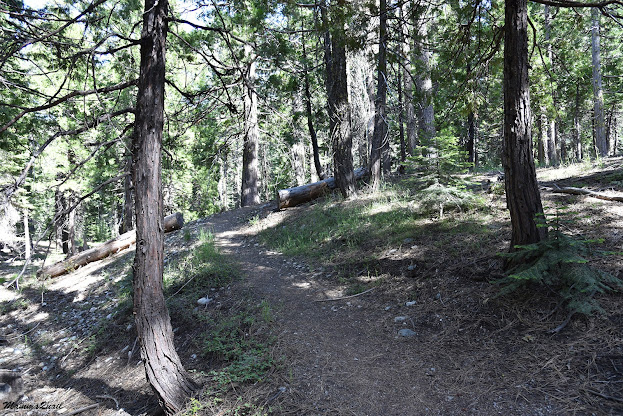 The trail was indeed a fairly easy one, without too much elevation changes. We started into the conifer forest where there weren't much wildflowers to see. 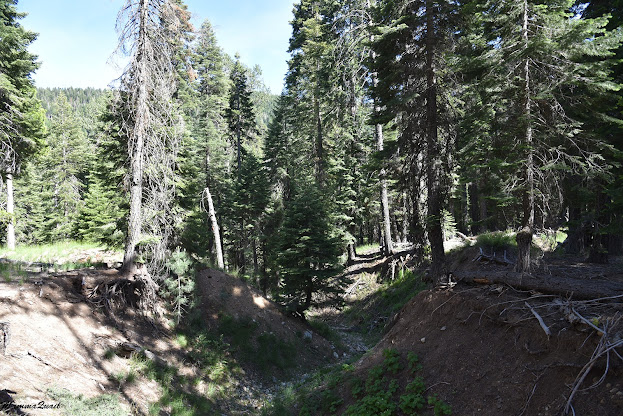 Almost immediately however, Pappa Quail and the elder chika were spotting birds. Now it was their turn to linger behind while everyone else ket striding up the trail.

Even familiar birds, common in the Bay Area, captured the attention of my family birders.

The trail gradually neared the creek. The trail leveled, the vegetation thickened, and the conifers were replaced by willows. All of a sudden there were many more wildflowers along the path and although I was at the lead this time around I felt compelled to pause near the colorful bouquet that nature displayed for me.

A short, partially obscured trail diverged from the main path, leading to the Jamison Creek. I stood there briefly, enjoying the sight of rushing water. A few little birds were chirping in the bushes by the creek and I mentioned it to Pappa Quail and our elder chika as I returned to the main trail.

My two birders went to look at the river and had vanished into an alternate universe for a while. I did not see them again until we got to the turning back point at the park's campground.

It was there by the creek that they finally saw their prized sighting and my elder chia's lifer, the McGillivrey warbler.

There were other birds there two. I don't know exactly how long they were in the bushes by the creek but apparently that was the best spot to bird-watch along the entire trail.

Back on the main trail I slowed down a bit, feeling less obligated to to linger, I relapsed back to my habit of stopping by each wildflower, even common flowers that I've seen on many hikes before, including yesterday's hike.

A movement by the trailside caught my eye - it was a cute little garter snake. It was also very cooperative and paused as I took photos of it.  Later , when Pappa Quail and our elder chika joins the rest of us at the turning back point they told me that the snake was still there when they were coming up the trail. In fact, the snake posed for them too, and Pappa Quail's photo is better than mine so I post his here.

After the snake encounter the trail emerged from the trees and begun a slow ascend along the creek bank. The view opened up a little more and I could tell that the shadows were lengthening.

I gave up the lead for wildflowers again, this time for the Ceanothus bushes that perfumed the air with their dense, sweet fragrance.

After inhaling as much as I could the sweet Ceanothus I hurried up the trail following my friend and the kids. On the way I crossed another side creek where I stopped short when I saw some bog orchids blooming in the dense creekside greenery. Orchids are always worth the stop.
I was glad I stoped at that location because there were other wildflowers to see there. Shortly past that creek the trail plunged once again into the woods where nearly all bloom was gone.
I arrived at the campgrounds picnic area where my friend and the kids were waiting for me. We sat there for some time, snacking and chatting until Pappa Quail and the elder chika came up the trail with some exciting stories about the birds they had seen. My elder chika was super excited to add a lifer to her list of birds and had to tell us all about it several times over. I was very happy for her, but after a few minutes I got up and went to the road bridge and gazed down at the water of Jamison Creek rushing below me.
While Pappa Quail and the chika were taking their rest and snack I checked my own photos on the camera screen and found that my photos of a coral root orchid I've seen on my way up near the campground didn't come out right. So I took my camera and went down there to try again for a better shot of this pretty orchid.
After some debate we decided to return back the same trail rather than following the paved road to the park's headquarters. It was getting late in the afternoon and we would have a 45 minutes drive still back to the Little Truckee campground where we were staying. 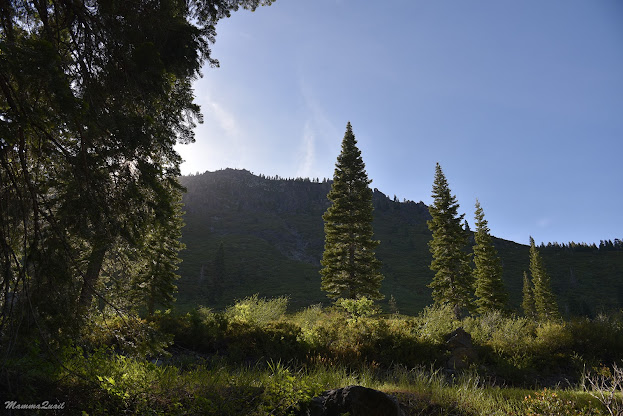 The way back was much faster. Although this trail doesn't have serious elevation changes, it was still going downhill on the way back. Besides, I have already seen all the wildflowers along this trail, right? 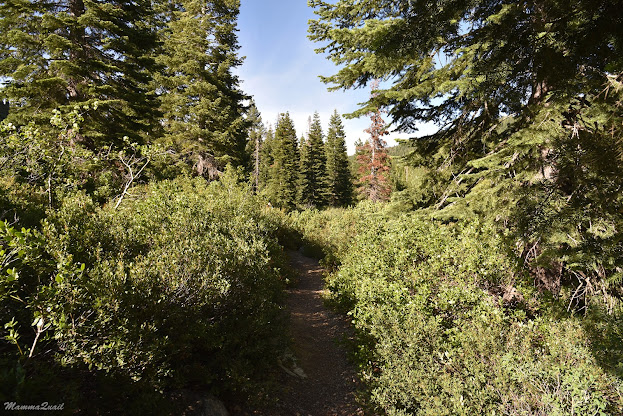 Well, not exactly. Some things become visible when looked upon from the opposite direction.
We stuck together better this time around, striding down the trail, pacing out the descending evening. I rushed across the boardwalk that stretched over the bog by the creek but my elder chika remained behind. She'd seen a bird there. 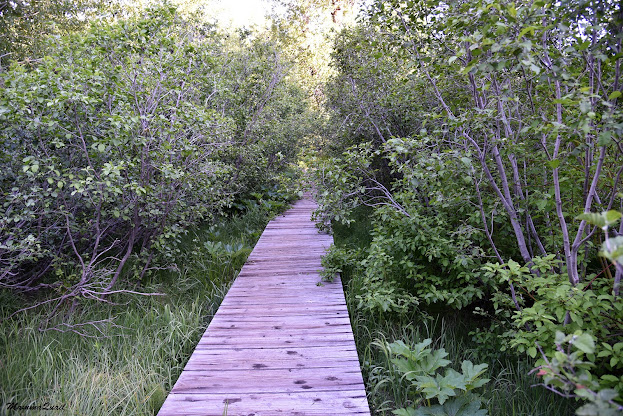 The bird sh'd seen in the bushes was a grosbeak, the kind of pretty, yet elusive bush bird that is fairly common yet difficult to see, let alone photograph. She did it though, her patience paying off.
The rest of the hike passed quickly. I hardly stopped anymore, except to make sure that all the kids were within eye sight, and to get another shot at sights that didn't come out right on my way up the creek.
One of the places I did stop and even left the trail for a few steps was where I had seen a lily blooming down by the creek off the trail and didn't photograph it on the way up hoping I'd see more of them in a more convenient setting. Well, I didn't see any other lilies on that hike so when I returned to that spot I took the time for a close up of this pretty lily.
It was late when we finally arrived at the parking lot and we still had the long drive back to our campground, but I was happy that we came back to this park for a hike instead of lazying by Lake Davis or getting early to the campground and kill time there. Not that I don't like aimless socializing, but my reference is almost always to explore new wilderness areas. After the long COVID-19 enforced break I was really hungry for it, and the Plumas-Eureka State Park had truly hit my spot.