After hiking for two days at the Plumas-Eureka State Park The last day of our first COVID-19 era camping trip I planned to simply hike along the Little Truckee River. It wasn't where we had planned to stay and hike but since that's where we ended up camping there we decided to explore the immediate vicinity.

In the morning we took our time breaking camp and getting ready to hike. Even before setting out however, the elder chika was busy birding by the campground. She had already sighted an osprey's nest nearby and was avidly taking photos of the nest and the birds flying back and forth with nesting materials.

Smaller birds were bolder coming near our campsite, mainly this little nuthatch that apparently resided on the tree right by the campsite's parking spot. The little bird would drop to the ground and hop between the cars, checking the ground for little bugs and giving my chika plenty of photo ops.


The day before I picked the brains of the campground host about what's there to see in the area and he was very excited to tell us about a large beaver that resides upstream and was visiting the campground at nights. He suggested we'd hike to see the beaver's lodge about a mile and a half upstream. We weren't fortunate to see the beaver herself on her campground visit but we jumped on the idea of hiking along the beautiful river we camped by for three nights.

One the campsite was clean and the cars loaded we started our hike upstream the Little Truckee River, due north. My two birders were at the lead and I at the rear, looking for wildflowers.

The trail north of the Upper Little Truckee campground isn't an official trail but a path maintained by the casual foot traffic of dog walkers, anglers, and lay hikers. The path veers between proximity to the river and the road, depending on whatever obstacles there are along the way. 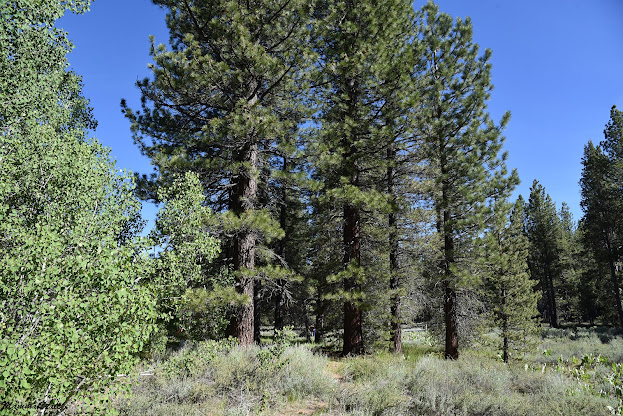 My birders paused at the edge of the campground just before entering the trail proper. They had spotted a bird that to me looked just like any other little gray bush bird but apparently this one was something more special - a solitaire.

I, however, found something special indeed - a peony that was still blooming, albeit so late in the season.

In no time at all we arrived at a wide area of the river where the current was very slow. It was too close to fit the description of the campground host as to where the beaver lodge was, and indeed, there were no signs of beaver activity there. 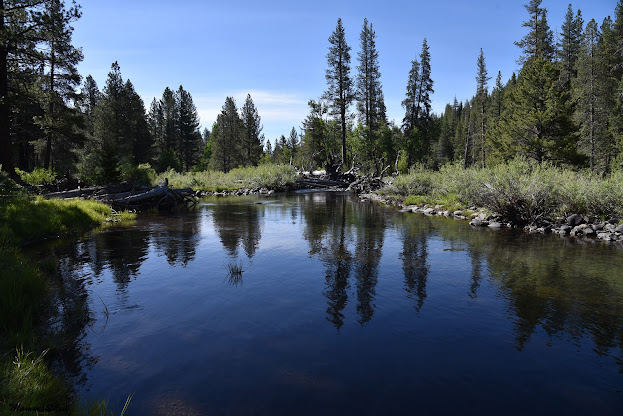 My birders found a dipper there, which I was very excited about. I love dippers and I am pleased whenever I get to see them.

Upper stream the river narrowed and the current sped up. The sweet sound of rushing water that lulled me to sleep at my nights there was caressing my ears now as I walked along the bank.

There were plenty of wildflowers along the path. Some were growing as individuals here and there but many were growing in large, colorful patches.

I've also seen some wildflowers that I don't get to see often, not even in the Sierra Nevada. They aren't rare, I guess I just happen to miss their season most of the time.

The river side wasn't heavily forested but there were plenty of trees between the water and the road, especially pine trees. The pines were at the peak of their bloom too, and yellow clouds of pine pollen streamed from the trees whenever the wind moved them.

An excited call from the people at the head of our little group told me that we had arrived at the beaver's territory. Sure enough, there were plenty of gnawed trees all over the place.

The trail sort of disappeared there and we made a slow progress across felled trees and rocky ditches until we arrived at a pond by the side of the main river. We have reached the beaver pond and her lodge. The beaver herself was probably sleeping inside her hut.
The hike back from the beaver lodge didn't last long. I took a moment here and there to look at flowers I'd brushed by before but didn't really see any new sights on our walk back to the campground.

At the campground my friend told me that she needed to start back home, and she took the boys with her. We waved goodbye and watched their car disappearing down hwy 89 toward Truckee.

I wasn't ready to leave just yet. It was still early and I wasn't at all eager to go back to unloading camping gear and doing laundry, so I convinced the rest of my family to hike some more along the Little Truckee River, this time downstream, to the south.

Switching direction, we had to first cross the campground again. Common birds seen at the campground are the Steller's jays, always looking for something to eat when humans aren't paying attention. This one in the photo stuck to a more natural diet.

There is a maintained forest trail linking between the Upper and the Lower Little Truckee Campgrounds. Exiting the Upper campground on it's south end we were now walking south on this trail to the Lower campground. Almost immediately I found that there were plenty more wildflowers on this side of the campground than on the north side.

I saw flowers blooming there that I haven't seen on the north side. I don't know that they aren't there, I simply didn't see them.

Even flowers I've already seen on the north side of the campground seemed more numerous on the south side. Walking leisurely along the easy, flat path, I had ample time to enjoy the entire display of mid-summer colors.

The trail neared the river where Pappa Quail and the elder chika saw some birds in the trees and stopped to take a better look. I walked to the river bank and looked at the water flowing gently as a silver strip between the pine trees.

My birders took their time going round the tree where a few of those little brown birds where doing their best to keep just out of sight. Meanwhile the younger chika and I got fascinated by red ants that were busy below our feet. 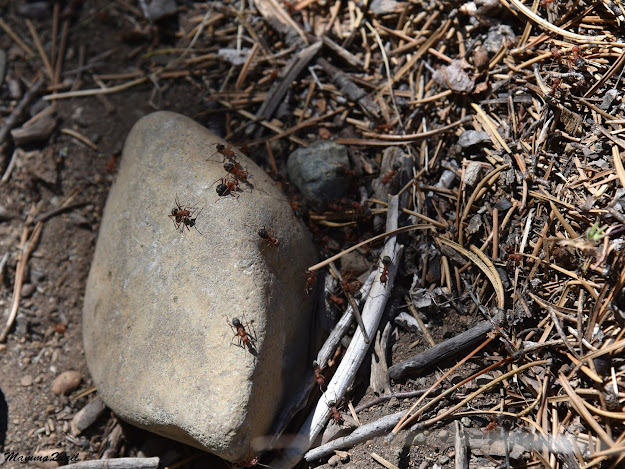 Insects were plentiful everywhere around us. For the most, it's butterflies I pay attention to. They are colorful, and often pose on top of flowers so I get two subjects in one photo. Many other times however, the insects provide their own show of nature, like these nest of caterpillars. 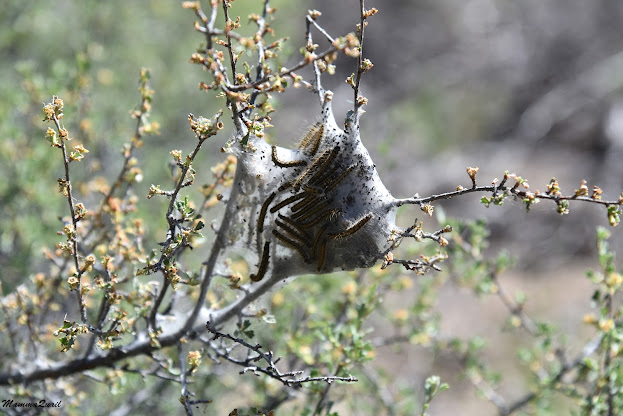 After what I thought was enough time waiting I started edging away on the trail. Not quite turning away but hinting that it might be time to move on.

Pappa Quail and the elder chika were pleased  when done circling that little pine grove by the river. There were plenty of birds there, and a ew even showed themselves and posed for the cameras.

June is a busy season for the birds in the Sierra Nevada and that was certainly evident with all the singing, chirping and twitting that was heard from the canopies. Gathering nesting materials was also a commonly observed activity, and of course - gathering food (which of course isn't an activity restricted to early summer).

Back on the trail we kept going south between the trees. The pines gave way to poplars and other broad leaf species, but none were casting any decent shade on the trail. It was mid day now, and getting pretty hot. 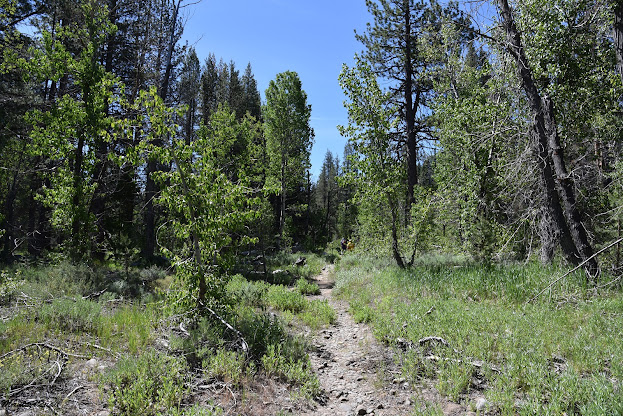 Thoughts of perhaps turning back early vanished from my mind when we came upon another patch of wildflowers, including more such as I haven't seen yet that day.

I did see the pussypaws along the trail already. In fact, I see this species so frequent on my Sierra Nevada hies that I hardy ever photograph it any more. As we got near the Lower Little Truckee campground however, we came upon a large path of pussypaws that was so beautiful that I had to stop and gasp with delight. I took several photos of the patch, none of which actually delivers the intensity of the color of these flowers. 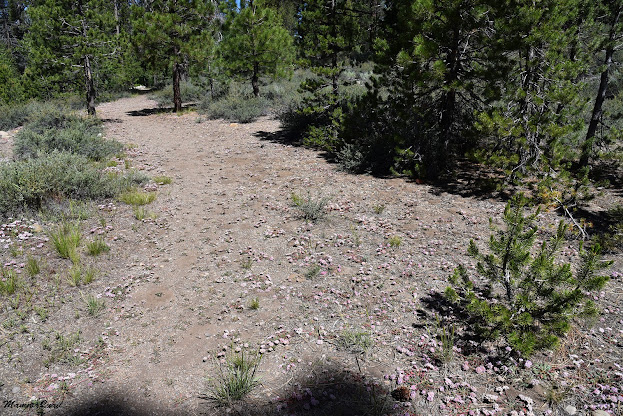 The campground tents were visible behind the next grove of pines and we decided that it was a good place to turn around. 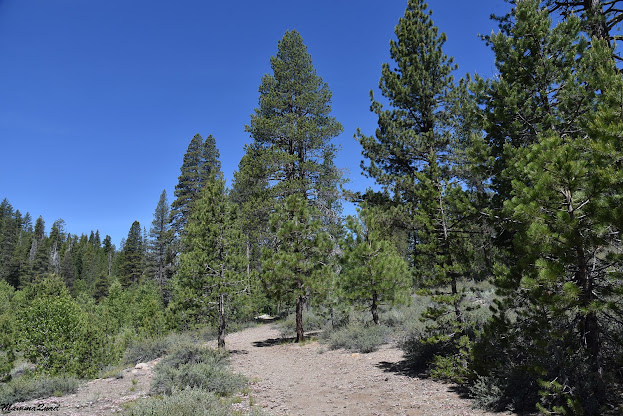 As we crossed the patch of pussypaws again I took a few closeup photos, each featuring a different pollinator insect. There were many, many of them there. Like the birds, they were all busy enjoying the bread offered them by the early mountain summer.

The way back north was fairly quick. It was hot and, knowing that this is our last walk before heading home had quickened our pace. Having walked the same trail south also meant that we've already seen what there was to see along the way.
Almost.

Going back on the same trail also gives the opportunity to try again for shots that didn't quite came right the first time around.

Back at the Upper Little Truckee campground we said goodbye to the helpful camp host. I looked at the river flowing gently southward - we would follow that flow all the way to the town of Truckee. Past the town we'd be splitting direction as we would turn west.

Even in COVID-19 days, our trip west on I-80 was dammed by a traffic jam near Davis. I changed seats with Pappa Quail and slept all the way home.