Oaks and Grassland: hiking the hills of Del Valle

I dropped the chikas at school and continued to Del Valle Regional Park. After a few short and less than satisfying visits I finally had the chance to do a proper hike there.


I parked by the horse staging area on the east shore and started hiking up Lake View trail. It's a fairly steep ascend and I stopped often to breath and to take in the view. The trail definitely stand true to its name:
The view to the north-east was of hills covered with a golden mantle of open grassland, dotted with numerous oak trees, most;y along the creeks. 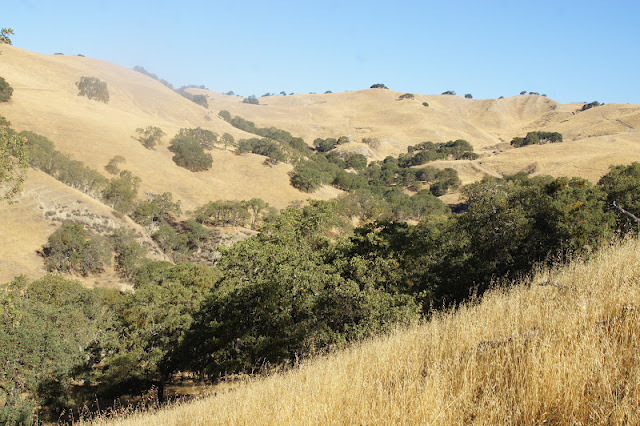 At the trailhead there is a cattle gate. Cattle grazing in park lands is a good way to manage the dry grasses, thus reducing fire hazard. The East Bay grassland comprises mostly of wild oats and other invasive grass species that arrived from the old world and took over the local bunch grass, which was much taller and didn't dry out like the immigrant grasses.
The hill sides are criss-crossed by countless cattle trails: 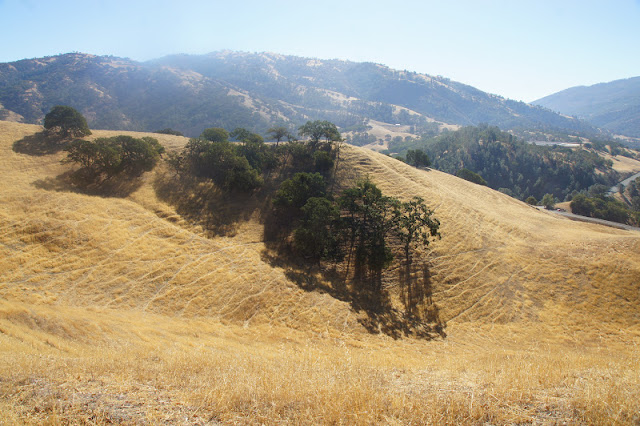 And the trail was decorated with multiple cow pies.

I turned left (north) on Ridgeline trail.
The coastal oak trees always look interesting to me. Their twisted, knobby trunks and droopy canopies give each tree a unique appearance - a personality, if you will. 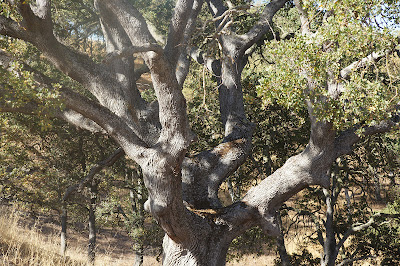 I photographed many trees on this hike. These two seemed very aloof, alone on the hilltop. 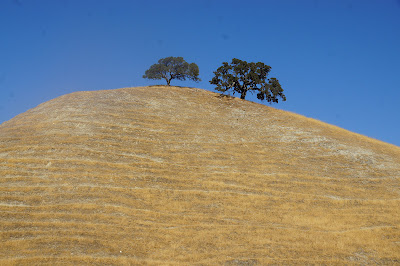 The trail crossed a number of creeks, most of which had small dams across, creating little ponds to catch flood water for the cattle to drink. They were nearly all dry when I was there. This one was still pretty muddy though: 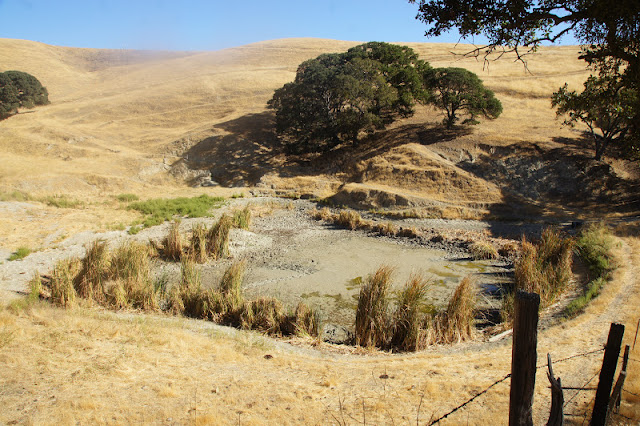 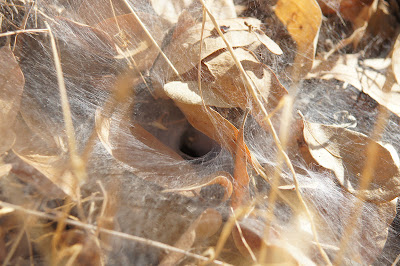 Most oaks I've seen along the trail were infested with mistletoe. This kissing post plant is a parasite that lives off the oak sap and drains its life. 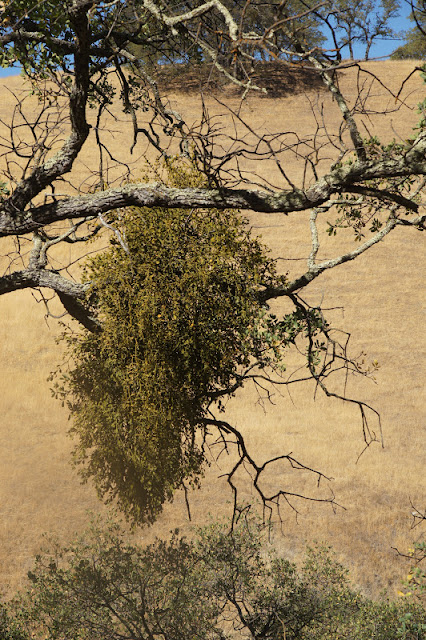 Another tree with personality: 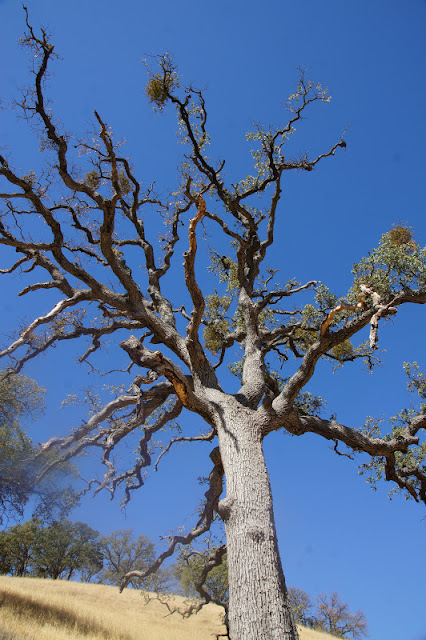 I turned left on Eagle Crest trail. At that point I was quite frustrated by the local birds, which I could hear all around me but I couldn't get a good photo of any. I changed my camera lens to the zoom lens and in two minutes I was rewarded big time - a golden eagle came swooping right by me!


I was so giddy after that sighting!
I continued down (and then up) Hidden Canyon trail. I could see a few other hikers on Ridgeline trail above me, but the trails I took had no one else hiking them. I was completely alone.
Here's a scrub jay posing nicely for me: 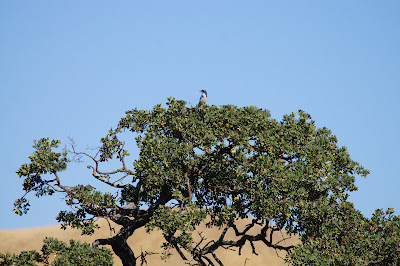 Hidden Canyon trail meets again with Eagle Crest trail, which reconnects to Ridgeline trail. I continued north towards the trails leading down to Badger Cove. At the top of the hill I took another nice view of lake Del Valle:

It was very hot by then and I was eager for a rest stop. I wanted to have my lunch by the lake so I descended towards Badger Cove. From that angle, the lake sparkled as if all of heavens stars came down to bathe in the water: 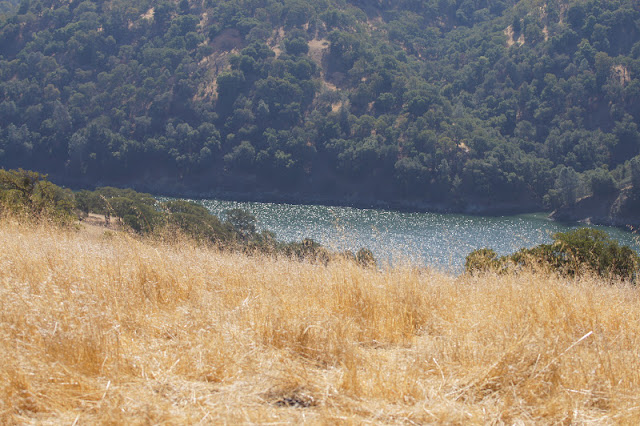 When I reached the lake I was disappointed to find it fenced off. I decided to wait with my lunch break until I find a place near the water, and so I turned left on the trail that on the map is labeled Swallow Bay but on the sign post it is labeled Venados. This trail is narrow and well shaded. I hiked it all all the way to Venados campground and finally sat down to eat and rest.

A was still pretty high over the lake, but there was no fence between us anymore,
I finished my lunch and headed back to the marina along the lake shore. There were other hikers along that part of the trail, many of them with dogs. I did get to see this cute fence lizard on the side: 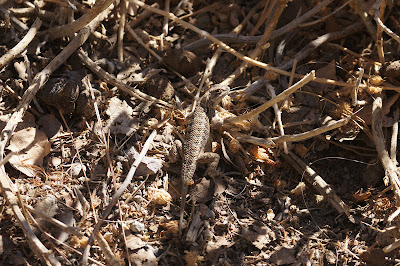 I reached the parking lot just in time to drive back to school and pick up my chikas. The entire loom was approximately 6.5 miles long, and it took me nearly 4 hours to hike it, at an easy pace. It was a very good hike. I finally had my satisfaction :-)