Journey Matters: Going to and Camping at Santa Cruz Island


This isn't a hiking post. It is a post of information about our cruise to Santa Cruz Island and of our camping experience there. All of the photos in this post were taken by Papa Quail on our way to the island and back.

One cannot simply drive to Channel Islands National Park. There's a bit of ocean in the way ...
When we settled on going there, I hurried to book our tickets with Island Packers: the company that will shuttle you there if you don't have a boat of your own (and we don't).
Their web site informed me that it is prudent to first reserve our campsite on the island, as these tend to become unavailable quicker than the boat places. So I did.
Years ago, when we were younger, fitter, and childless, Papa Quail and I did overnight camping in the island of Anacapa, the closest island to the mainland, and almost the smallest. We had to haul everything, including fresh water, up a steep incline to the campground.
This time, with the chikas and with grandma, we were headed to Santa Cruz Island, the largest of the Channel Island.
Cruisers are expected to check in at the harbor at least half an hour before setting out. We unloaded all of our the camping gear from the car and had to haul it in several rounds down to the boat. The gentleman who took the bags from me and into the cargo hold was the skipper himself. I joked with him as I handed him the ice chests, that there was precious cargo inside (fresh eggs). This minor exchange turned out to be quite important later on.
Being cautious, I purchased a few items that were designed to help with sea sickness. As it was, we didn't need any of them, as the sea was rather calm. People who tend to get motion sickness should make preparations, though.
One of the nice things about this cruise is that they aren't merely shuttles. there is a naturalist on board and the boat would often swerve to allow the passengers a closer view of oceanic wildlife.
We encountered many birds out on the ocean on our way to the island. Some simply rested on the water or flew here and there. But there was a large group of them overing over one spot and diving into the water, again and again. Most of these were Sooty Shearwater.
But there were others, too. Gulls and Terns. All focused on this one area, where a shoal of fish was close to the water surface.
The fish weren't there by accident. They were concentrated and driven to the surface by a large pod of Common Dolphin.  The boat shifted over so we could have a closer look at these dolphins.
The dolphins not only were unphased by our closeness, they also enjoyed much frolicking by the boat and surfing on the boat waves. There were many youngsters in that pod.
At some point Papa Quail got very excited: he thought he'd seen an albatross. A closer look at the photos had quelled his excitement, though. It was merely a Western Gull. But a very beautiful one!
It was so overcast that we couldn't see the islands until we got quite close. There, as we were told, it had a microclimate of its own, where the sun often shine even though the ocean sky is gray.
That indeed turned to be the case. As we curved around the eastern tip of Santa Cruz Island, we saw some holes where the cliffs met the water. 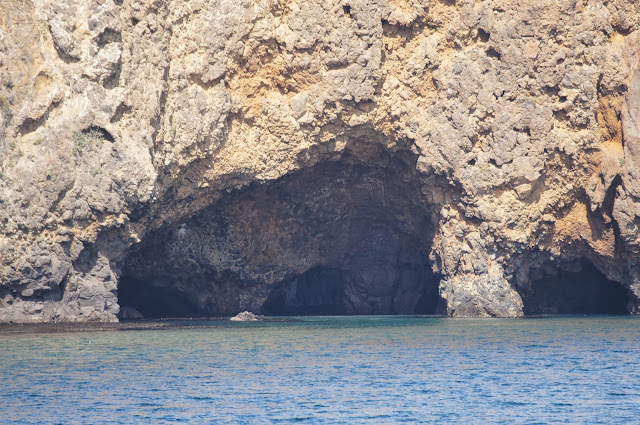 Santa Cruz Island is known also for its watery caverns that attract kayakers.
Other than hiking and swimming (it is good to keep in mind that the water there is very cold), kayaking is also a popular activity of the park's visitors. Next time I visit the island, I think I'll try this too. 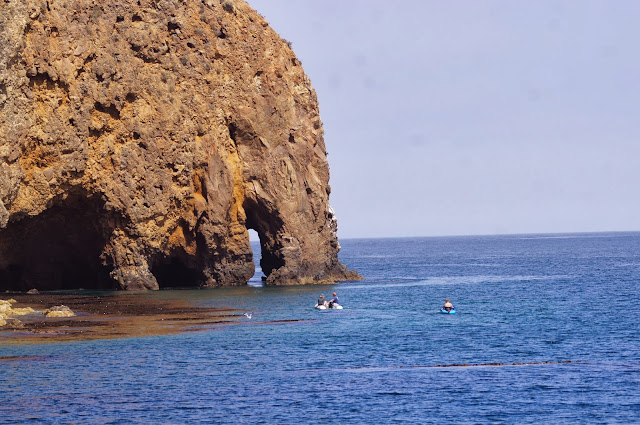 We disembarked at the Scorpion Anchorage, which was the first of two stops for the boat on the island. We lined up on the dock and the equipment came out of the cargo hold and was moved from hand to hand down the line of people, to be piled at the end.
Our ice chests didn't make it out. I argued with the crew for a while and they did let me come on board and look for myself, but the ice chests were not found and the crew insisted everything was downloaded. The boat had to leave for its next stop, so I left without the ice chests that held all of our veggies and other cold-requiring food.
Scorpions campground is about 1/2 mile from the anchorage. Since no trollies or wheelbarrows are allowed on the boat we had to make a couple of rounds to haul our gear to the campsite. It was only later that we discover that wheelbarrows can be rented out on the dock ...
At some point I cornered one of the rangers and told her what had happened to our ice chests. She pulled her communicator out and called the boat, which was waiting on the other side of the island, and got hold of the skipper.
He insisted that everything was unloaded from the boat.
At that point I intervened and asked the ranger to remind the skipper of the little banter we had when the ice chests were loaded. Thankfully, with that, he remembered. Shortly after, the ranger showed at our campsite and informed us that the missing ice chests were found and that they will be dropped at the anchorage in the afternoon, when the boat returned to ferry people off the island.
We were all relieved and were ready to go on our first hike on the island.
Scorpion campground is primitive, but has potable water and vault toilets. No campfires are allowed there, so we didn't go to sleep smelling of ashes as we normally do on camping trips. It was nicely peaceful and quite, and also dark. Just as I like it. Even grandma slept well.
Check out time is at 10:00 am, so we had to break camp and haul all of our gear to the dock before going on our second hike on the island.
On our way back, the ocean sky was clear and blue. The ocean itself was even calmer than the day before. We saw many of our yesterday's acquaintances again, although in much lesser numbers.
We did see the dolphins again. Seeing dolphins always make me giddy. 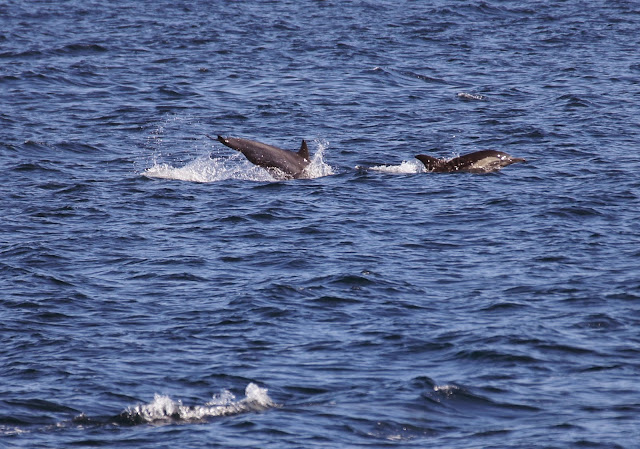