When my mother in law booked her tickets to come visit us I immediately started planning our road trip. This time we were bound for the coast of Southern California. I had many objectives for this trip, like meeting friends and exploring nature areas, but my highest desire was to revisit the Channel Island National Park.
Papa Quail worried over the accommodations, (camping only), so I presented his mother with the option of cruising in and out in one day.

"It'll be a waste of time," she said. "I'd rather camp there and have the time to see the place."
So I went ahead and booked the campsite and the boat tickets. I think I am very fortunate to have such a mother in law :-)

The Channel Islands of California are a group of small, currently uninhabited islands, about an hour cruise west of Ventura. Other than being a safe roosting and nesting place for sea birds, the islands are home to numerous plants and animals, some of which have evolved in the island isolation into separate species that are endemic to the islands. One of our objectives was to find the two endemic animal species that reside on Santa Cruz Island: the Island Fox and the Island Scrub Jay.

The first was a really easy score. The foxes waited for us in the campground. As we hauled our camping gear from scorpion anchorage to the Scorpion campground, many little foxes, individuals or family groups, were busy running from site to site, climbing on tables, sniffing bags and boxes, looking for human food.
Each camp site had a secure food storage box. We also got a speech from the ranger about keeping all of the bags covered and food tucked away in the box. The foxes, already habituated on human food, are crafty in getting it.
And they aren't the only animals there who know to break into human containers. Ravens of that island, have learned to open backpack zippers. We were instructed to keep our backpacks under tarp when not being carried.
But not all the birds there are to be wary of.
After pitching our tents and checking the Island Fox off our list, we set about looking for the Island Scrub Jay. We were told to look for them in Scorpion Canyon: the creek that descends from the island's hills directly to the campground. We got our hiking gear and headed up Scorpion Canyon.

Nearing the end of summer, the only green that is seen on Santa Cruz Island is in the low hillside trees and along the washes. While most herbaceous plants were done, some shrubs were still in bloom, like the morning glory that dotted the creek line with its bright-white flowers.
Island Morning Glory close-up:
We strolled slowly along the creek, searching for the Jay of our desire, but the only birds about were black phoebes and sparrows. There were a lot of bugs too, flying to and fro and feasting on the still open flowers.

Some flowers become even more beautiful when done. The Island Buckwheat inflorescences turn deep rust that really stands out.
And there were many of these shrubs, spread out like like puffy cushions all over the place. 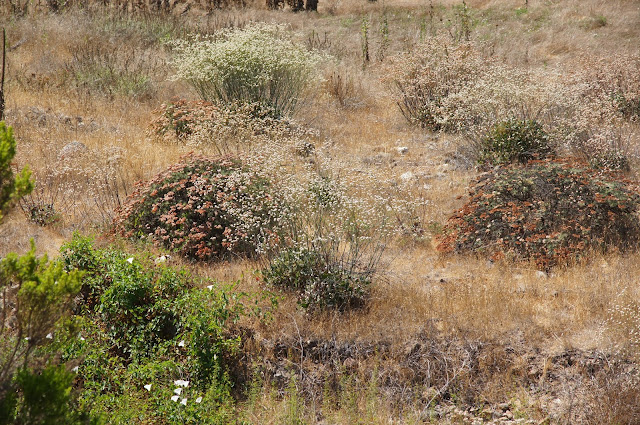 After about a mile of easy walk the trail took a turn south and up. Sharply up. Add to that the August mid-day heat, and you get a very strenuous hike. Luckily, this portion of the trail is less than a mile and although slowly, we made it all to the top, grandma and chikas and all.

We did have a few rest stops along the ascend. Officially to bribe the chikas with some cookies, but also to photograph the occurring flora.
While waiting for the chikas to make their way uphill I photographed this unassuming shrub:
Which turned out to be one of the island's treasures: the rare Island Bristleweed.
At the top we see a relic of the not so ancient human settlement of the island: an old oil well. 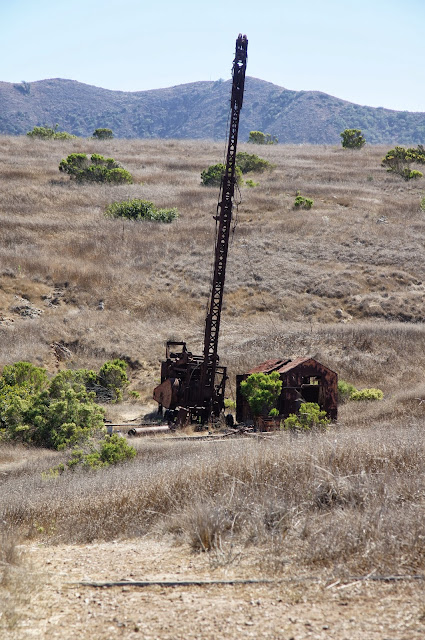 At the trail intersection we take left (north). Our trail now is a wide dirt road that is now used only by the few vehicles that the National Park rangers operate. Up on the plateau the trail is almost level and walking becomes much easier. There are very few trees and we can see the hill tops all around. Seeing across the channel to the mainland is more challenging because of the fog that didn't really lift that entire day. 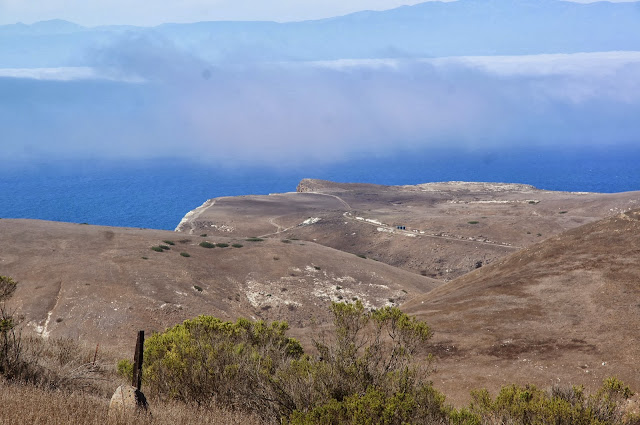 Much less is blooming up on top, but it isn't all dry and dead yet:
Right there, on the trail itself, we encounter many large aggregates of this insect. There are many of them in each group, in various ages. Some of the adults are busy mating but most of the individuals there are nymphs. They take no notice of us as we shade over them while observing. Eventually even the chikas are willing to leave the attraction and move on.
One more mile, and the trail begins descending to the ocean. Mildly at first.
We get a glimpse of the ferry boat that's leaving the island with yesterday's campers. The schedule is tight, but we have until tomorrow. 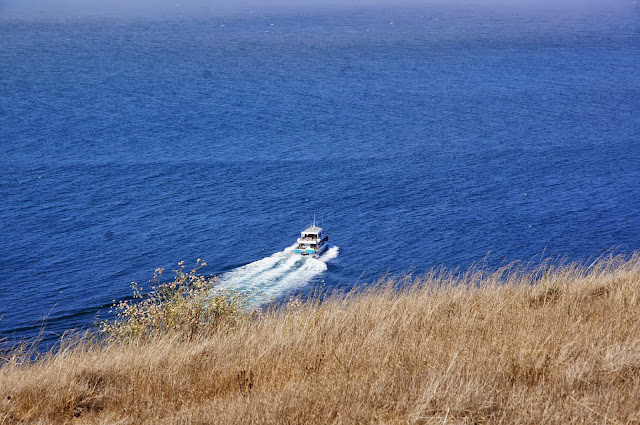 Very gradually, almost without noticing, the trail becomes steeper and steeper until it becomes just as steep as it was going up. With all the gravel and potholes, it is very taxing on the knees.
We take it slow and easy, enjoying the cliffside vegetation.

There I meet again the Seaside Fleabane. Same species I saw earlier that summer at King Range National Monument and later at the Marin Headlands. It is common and very pretty.
Finally we are down by the old settlement that is now the visitor center and museum. Grandma Quail announces that her legs are really hurting and that she is going straight to the campground to rest. Papa Quail and I take the chikas to the beach to wind down. The cove is sunny and hot, and the ocean is very inviting, but it is already late in the afternoon and we need to start thinking about dinner.
So after some relaxation and admiration of the birds we see, we call the chikas from the beach and head back to the campground.
The entire hike took us about 4 hours of slow walk. As for the jays, they remained out of sight throughout the hike.