Usually when I make it to the Kirkwood area it is to experience the joys of winter wonderland. Last year, however, I had the opportunity to explore the area a little during summer. Last Labor Day weekend we went camping with friends near the Carson Pass and on one of the days there we hiked around Kirkwood Lake.
The lake isn't part of the ski resort but it is certainly a resort area. There is a campground at the western lake shore and a myriad of resort houses and cabins along the eastern and northern shores. The southern shore is left for some awesome wild granite cliffs.
There is a hiking trail surrounding the lake that is connected by a short path to Hwy 88. The trailhead is marked with a modest sign that is easy to miss unless looked for. There is a small pullout with a short dirt driveway where we parked the cars. We took our day packs, breathed in the hot summer air and set out for the hike. 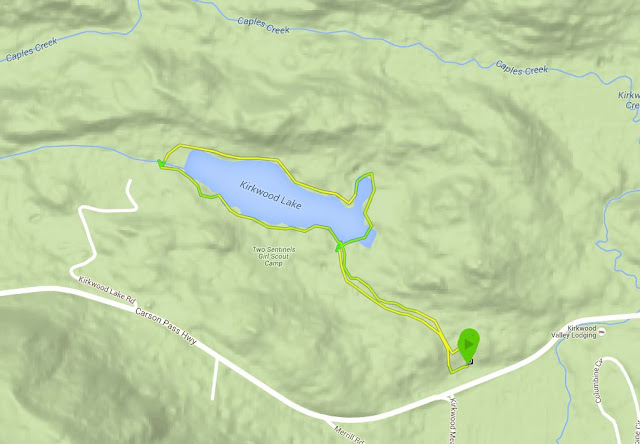 It was almost mid-day by the time we got to the trailhead, and it was hot. It was difficult to get started but once we did we got into a steady pace and plunged into the woods.
I didn't expect to see any flowers this late in summer but I did see some late asters here and there wherever the sun got through the trees. 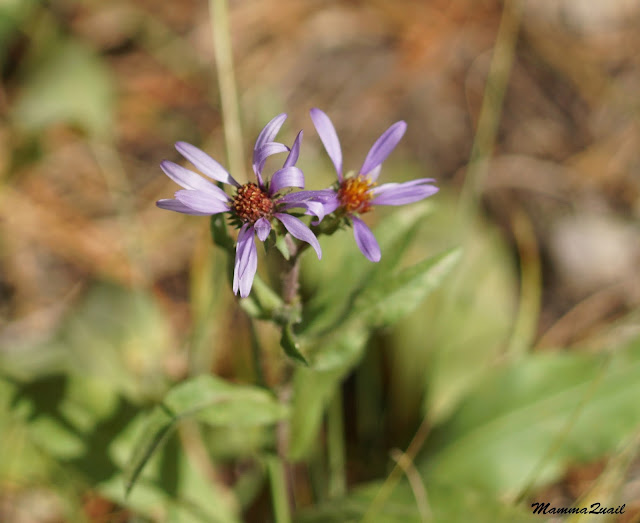 But generally, most plants had done blooming and were already fruiting.
Large, naked slabs of granite separated the forest trees, showing the mountain's making. Whenever we passed a particularly enticing one the children were all over it. 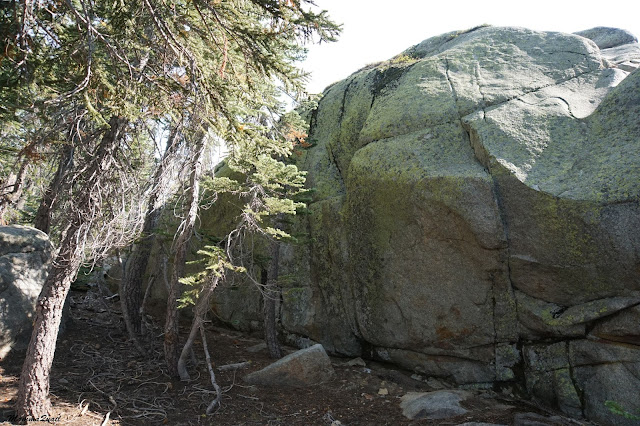 As short a distance as it was, it did feel like a long time before we arrived at Kirkwood Lake. We sat there for sometime, staring at the water. It was very hot, but there wasn't any good place there to go in the water, and no one suggested it anyway.
After a reasonable long break during which Papa Quail stalked and photographed a mockingbird we gathered ourselves and started the loop around the lake, counterclockwise.
We made our way, single file, along a narrow path running between the waterfront and the rocks. The resort properties were stretching all the way down to the water and it wasn't clear to us whether we crossed any private property lines. One way or another, no one came out to say anything to us. In fact, we saw very little evidence that these houses had any residents at all.
What we did see was a quick movement in the grass. A call of excitement from the head of the line and I shot forward with my camera - quick enough to catch the tail of a dark snake as it slithered away into hiding. 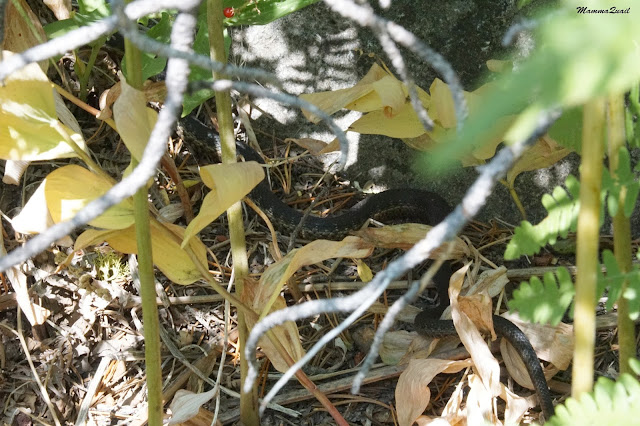 The squirrels were less shy. Hopping here and there between the trees and over boulders and logs. One of them stopped for a brief pose. 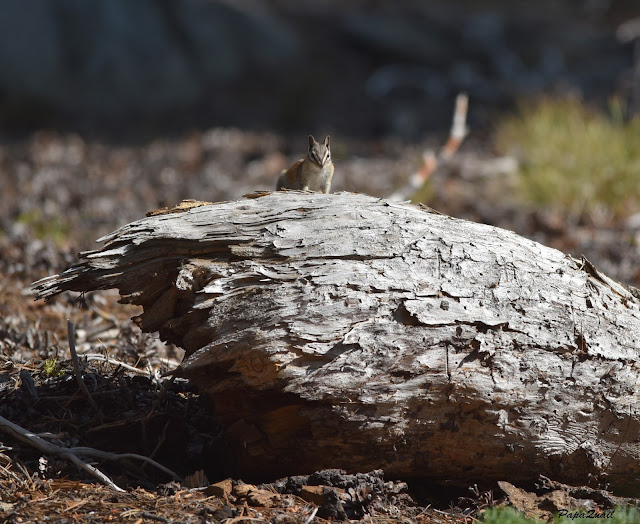 Eventually we emerged from the trees and got a clear view of the southern shore across the lake. A high dome stood in the background, displaying two rock 'horns'. 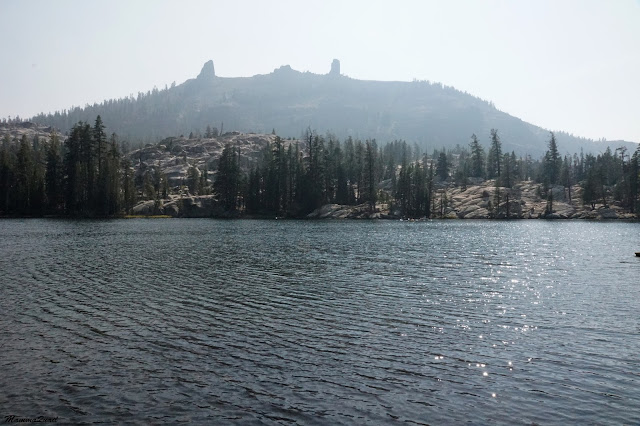 The water looked very inviting but when we finally arrived at the western edge of the lake where the campground was, everyone just slumped on the cement ledge there and zoned out.
The heat was intense. We had a long break at the western lake shore near the campground area. It took a while to get everyone back on their feet and down to the trail again.

The southern lake shore is mostly rocky slabs that go down all the way to the water. Hiking there involved climbing on the boulders and that got some life into the children who enjoyed hopping on the rocks. It was there also that we finally saw other people resorting by the lake. And where else would they be on such a hot day? So we had to take care not to step on anyone as we made our way between the rocky nooks. 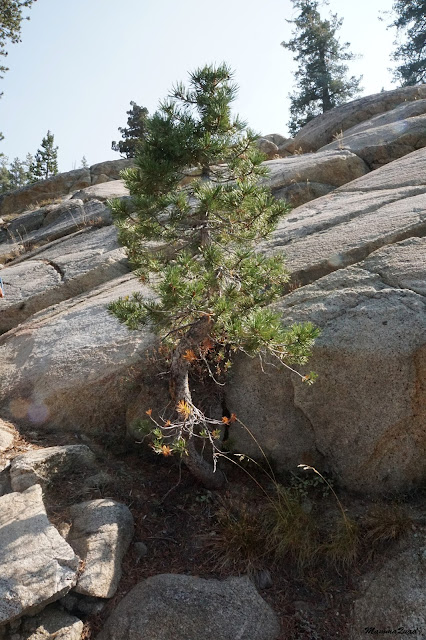 There, hidden in the crevices, is also where I found some more bloom. Not a whole lot, but enough to cheer up the summer's dead heat.
The southern shore also didn't feel so hot. Or maybe it felt so because it was getting later in the afternoon. Either way, it seemed like our little group found renewed energies and now we were moving quickly.
But not too quickly to appreciate the wildflowers that were still on.

The south shore trail rises at points high above the water but eventually descends down to the woods again and closes the loop that circumvents the lake.
Looking one more time at the lake. Despite the heat the eastern shores of Kirkwood Lake aren't very inviting for a swim. The shore vegetation is high and thorny and the water close to shore is muddy. Either way, my company were eager to go back to our campground, and so we looked at the water one last time and headed back east on the same path we cam in on. 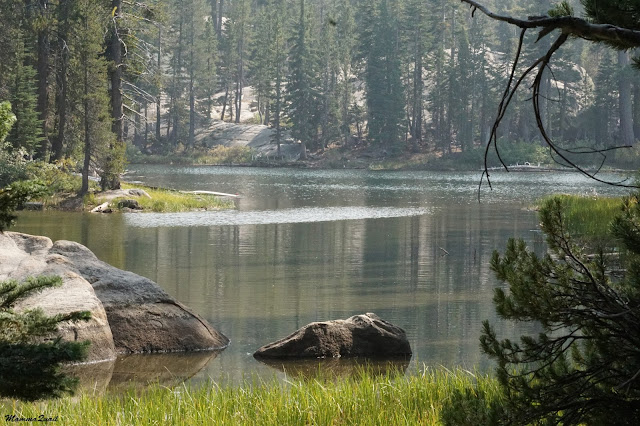 The granite cliffs accompanied us along the trail as we started back toward the road. High and smooth. The trees that were sparse at first soon grew thick and we were engulfed by the forest. 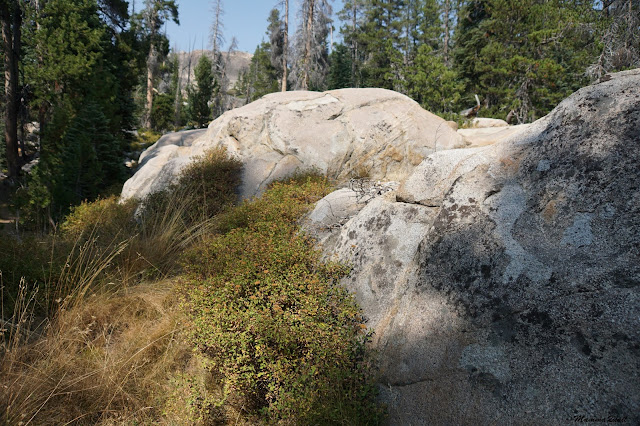 After having led the hike all along I finally found myself bringing up the rear. That was good because I had the time to check out the plants and to find the last wildflower of the summer there.
I was the only one who actually wanted to hike that day. Everyone else seemed contented for just hanging out by the lake where we camped. I insisted on getting everyone moving and now that they did, they were all eager to go back and have dinner. I looked wistfully back: it was the first time I paid attention to this area during the summer and it held much promise for future nature exploration. This little hike around Kirkwood Lake was merely the appetizer.