This year we went on our summer road trip with very little planning. I had a semi-solid plan for the first three days to explore the Gold Country, but only a vague idea of where to go next. Then Papa Quail came up with the idea of visiting the Ancient Bristlecone Pine Forest, because it has been a while since our last visit there, and it rained then. I immediately went with his idea - there is much to see in the Eastern Sierra on the way to and around the White Mountains where the ancient trees were. So after visiting the Calaveras Big Trees and the Indian Grinding Rock State Parks, and rafting down the American River, it was time to drive east across the Sierra Nevada.
At first I thought to stop at South Lake Tahoe and hike Emerald Bay State Park, but a couple of big traffic jams caused by road construction, plus a huge crowd of vacationeers and not a single parking spot had caused us to give up on that hike before even setting a foot outside of the car. In fact, we didn't even wish to stay in town for lunch. So we purchased some supplies and fled south on CA-89 to Hope Valley Wildlife Area.
I had discovered Hope Valley a couple of years back when I looked for a place to snow-shoe while my chikas were at ski school. Since then I visited that place a few more times, during summer, with the family. I knew it would be a perfect place to stop for a picnic lunch and for a short hike to break our long drive (we had planned to get all the way to Bishop that night).
On all our previous visits we hiked on the old paved trail that crosses the Carson River and extends to the mountains on the north. This time we stayed on the southern river bank and hiked along the water (and some of us in it).
A year ago when we were there with our friends the children spotted a muskrat in the water. She was busy collecting nesting material and carrying it to her burrow, the opening of which was under water. This photo of the muskrat is the only one of that visit I post here. All other photos are from our latest visit there of August 2016.
We had the perfect hike that day. The weather was perfect: warm, clear, and calm. We strolled lazily along the river bank, appreciating the beautiful mountain scene and the sound of the slow-moving river. 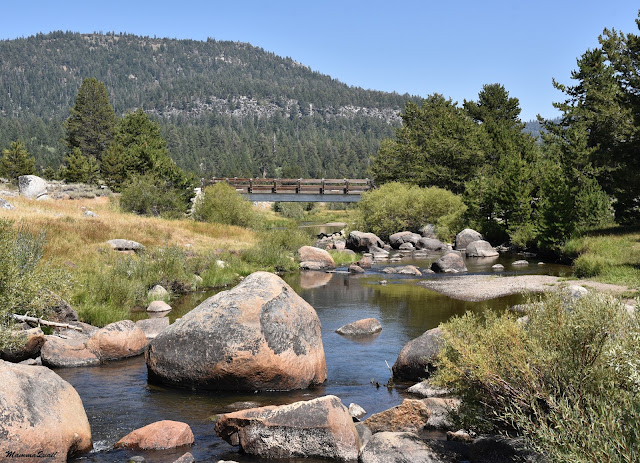 There are a couple of fishing docks on the south bank, connected by a narrow, paved path with benches. The chikas looked for fish (they found a few dead ones, I guess the 'catch and release' approach doesn't always work for the fish). I focused on the plants and the views.
I wasn't expecting any rigorous hike there, and indeed it wasn't. We walked very slow, stopping often to explore. Papa Quail's nieces were taking in the sights of the Sierra Nevada - they were very young when they'd been in these mountains before and they enjoyed it like it was their first time. 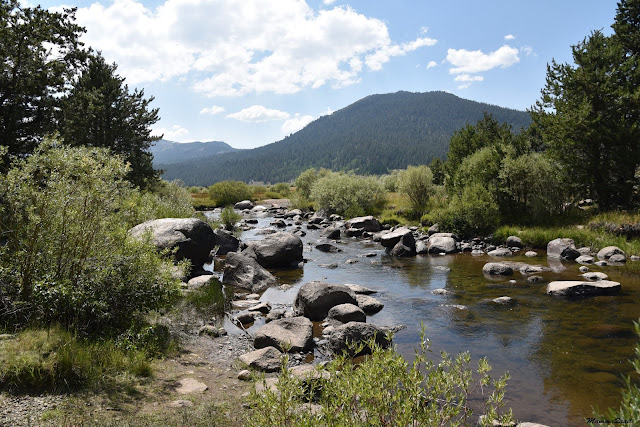 Very early on we lost Papa Quail. He went after a bird he'd spotted and soon vanished around the curve. My chikas, on the other hand, took their shoes and pants off and went into the creek to explore it up close. I told them they'd have to come back to fetch their things but Grandma Quail picked up their clothing articles and followed them along the bank. 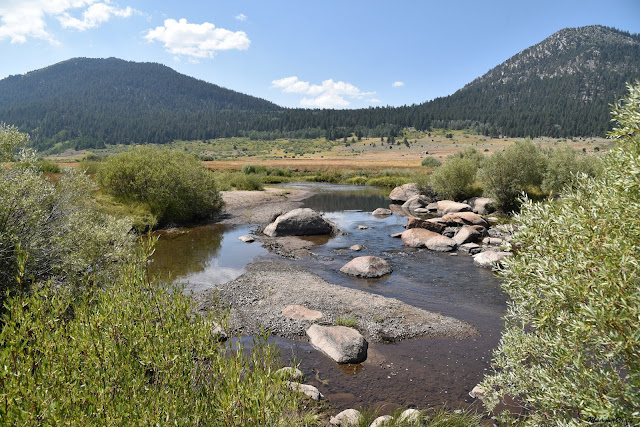 The only big fish we saw there were dead, but there were many living fish - very small fish in good size schools.
Then I heard an excited cry: "Snake! Snake!"
I hurried to where Papa Quail's nieces were and saw them pointing at a small striped snake that was moving quickly on the muddy creek bank. I gave them a little talk about garter snakes and that they shouldn't worry about them. We saw another one later on the hike too. It was a nice, warm day - perfect for snakes.
Mountain wildflower season is on until later in summer. There wasn't big bloom spectacle there, but there were numerous little wildflowers hidden among and under the shrubs. Many of them were of the aster family which aren't easy for me to identify at the species level, but I did try to get close!
The Carson River flows slow and shallow at Hope Valley and the chikas took advantage of it and were wading upstream in the water. It was very tempting to follow them in but there were flowers blooming so for the time I remained outside on (almost) dry land.
I did have to run ahead of my chikas in order to get a nice shot of the beautiful reflection in the creek before they stirred up the water.
Under the surface strands of algae billowed in the gentle stream. It looked very pretty and lush, like an tiny underwater forest.
And on the river bank some goldenrod plants in full bloom added bright colors to the general greenery of the area. At the slow speed we were walking I had the opportunity to appreciate in person every blossom I saw, pretty much.
Meanwhile Papa Quail had his own route of discovery further upstream. Later he told me that he was following a sneaky sandpiper along the river bank but his best bird photos of the day weren't of that sandpiper.
An osprey was circling the sky in the distance. Every now and then this fisher bird of prey would dive into the river.
While we didn't see the osprey catch anything, Papa Quail did get to catch it as it shook the water off its feathers after a dive, just like a puppy :-)
I made a different discovery on ground level: the river was blocked by a dam of tightly interlaced willow branches. A beaver's work, no doubt.
Behind the dam, as one might expect, the river widened into a large, breast-deep pool. How do I know it was breast-deep? Well, I saw pink flowers on the opposite shore and my zoom wasn't strong enough to take a photo from were I stood on dry land. That was a good enough reason to shed some clothing articles and wade across. 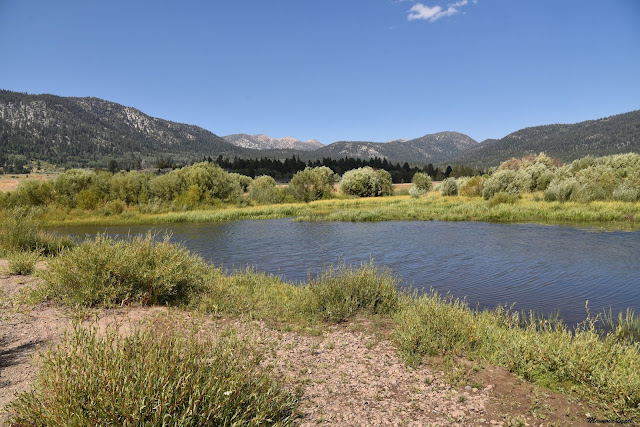 Wasn't it worth it?
It was, even if there was no flower on the other side. The water was surprisingly mild in temperature and the dip was very refreshing. While I was in the water Papa Quail returned from his solo hike and took some shots of the flowers with his high zoom lens, without setting a single foot in the water. Still, my close-up photos are better.
The small pebble beach by the beaver-dammed lake was dotted with little lupine plants, so well camouflaged that only their blue bloom stopped prevented me form stepping on them.

My elder chika, always in search of critters, has found the molt of dragonfly nymph. These are little Nature treasures that are always fun to discover. This small, discarded skin encompasses the big story of the dragonfly's fascinating life cycle.

While pines dominated the tree scene in Hope Valley, it was primarily willows that grew near the river. Not quite trees, but thick, round shrubs. In winter they are bare and show their rust-red barks. The willow flexible twigs were used by the Native Californian women for basket weaving and the willow bark was used as medicine.
Usually when I see yellow flowers of the Brassicaceae (Crucifer) family along the coast I disregard them as invasive species. In the Sierra, however, I do not make this assumption.
Even if they don't look fancy, these little crucifers can be quite adorable.
We lingered by the beaver-dam pond for a while. Papa Quail eventually got bored and started back toward the parking lot, leaving the rest of us to dry up and get dressed. He had some nice photographs of the blackbirds that hopped around us, possibly in hope that we'd leave them some crumbs (which we wouldn't, even if we had any food with us. Feeding human food to wildlife is very bad for them.)
Brewer's blackbird is a very common species, and they don't get featured often because of that. Still, they are pretty birds and they seem even prettier in the mountains. Everything looks prettier in the mountains.
We took our time but eventually we were all dressed and ready to go. We said goodbye to the calm beaver pond and started making our way back along the water. 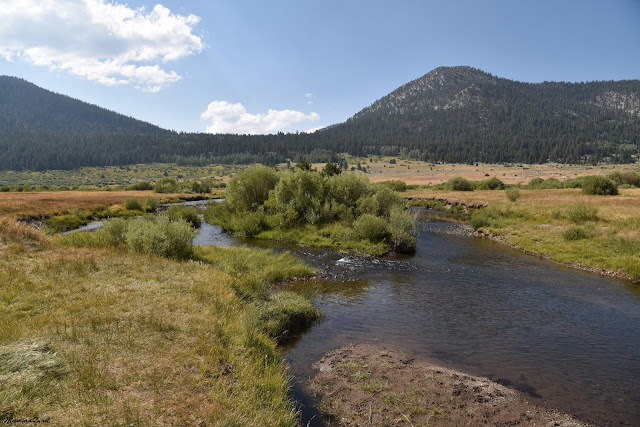 Papa Quail must have been waiting for a while because soon I got a phone call from him, inquiring when we expect to be back. Feeling a bit rushed I took off from the river and led everyone on a shortcut route through the meadow in the direction of the parking lot. 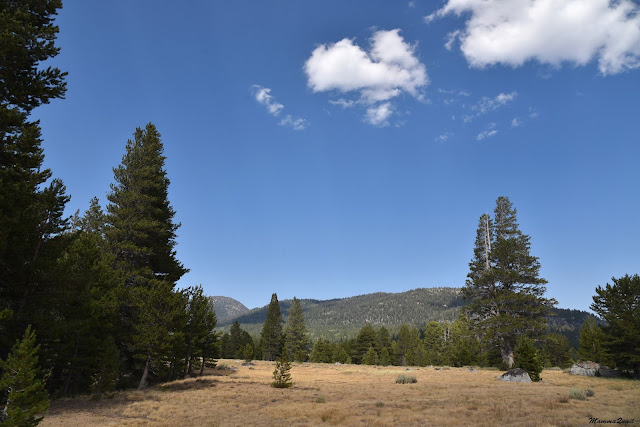 Away from the river the meadow was already dry and brown. There were a few pine trees and some awesome boulders that the chikas and their cousins enjoyed climbing on. We were slow in getting back to the car and when we did, there was still no sign of Papa Quail there. I called him and found out that he was waiting for us by the river.

It was late in the afternoon when we were all finally reconnected and ready to go. We had spent, almost without noticing, over three hours at Hope Valley. Three hours of leisure and Nature fun, of exploration and relaxation, and we could have easily stayed more. Like other on-the-way Nature jewels we had found, we'll frequent Hope Valley in the future as well. Maybe when it's wearing white once again :-)