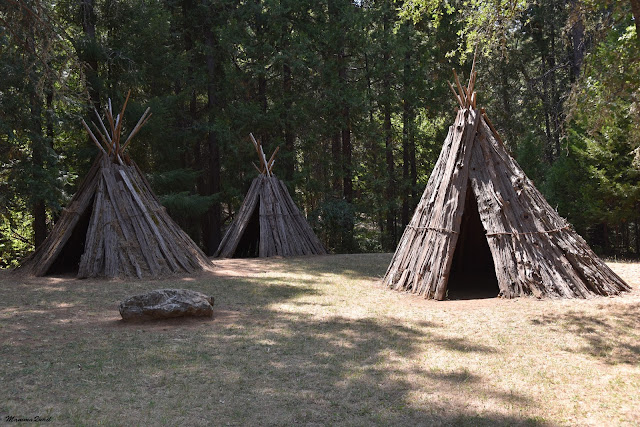 The Sierra Foothills area known today as The Gold Country used to be the California Miwok nation's country. This nation was distant enough to be largely spared by the Spanish missionaries and while ranch settlers gnawed at the Miwok land and occasionally 'recruited' Miwok farm workers, they were mostly left alone. But then gold was discovered at the Sutter Mill and everything changed. Speculators, miners, settlers and fortune-seekers flooded California and within the short period known as The Gold Rush California was completely transformed, both ethnically and physically. For the Miwok that change meant a massive death and displacement, and the near erasure of their culture. What has survived is now being preserved and taught to the new generation of Californians, both native and immigrant-descent.
Indian Grinding Rock State Historic Park is one of the places where the Miwok ethnic preservation takes place, as well as a gathering place for the tribe's people that maintain their MiWok identity.
We arrived at Indian Grinding Rock on our way from Murphys to Placerville. On the previous day we hiked at Calaveras Big Trees State Park where we saw some of the damage done to Nature by the gold rush settlers. At Indian Grinding Rock we were to see more of the damage done to the area's native people.
At the visitor center I was told that they had run out of maps. I therefore listened carefully to the ranger as he described the trails to me. Indian Grinding Rock is a small park with only two short loop trails at a combined length of under 2.5 miles.

The North Loop begins in a thin pine/madrone wood but soon crosses the park road and a small dry creek. There, under the bridge, grows a patch of milkweed. It was way past their bloom season but the puffy fruits are quite interesting (and very, very toxic).
Milkweed fiber was used by the Miwok to make ropes.
Not only milkweed was past its bloom, nearly every plant there was. There were a few late bloomers though, most of them very small and close to the ground.
The few flowers that were still blooming were an attraction for butterflies. There were quite a few of them flying around. Some even landed for a few seconds, long enough to get photographed. This butterfly that posed for Papa quail, is feeding on one of three species of star thistle, all of them invasive, non-native species.
After Papa Quail walked ahead the butterfly took off and landed somewhere in the layer of fallen leaves. I needed the sharp eyes of Papa Quail's niece to point it out to me, it was so well camouflaged, eye spots and all.
The buckeye I know from many other places in California, including the Bay Area. There were others there, however, which I didn't recognize and as of yet, unsuccessful in identifying. The one thing in common to all of them was that they were pulling off a disappearance whenever they landed on the ground, perfectly blending in with the dry vegetation. 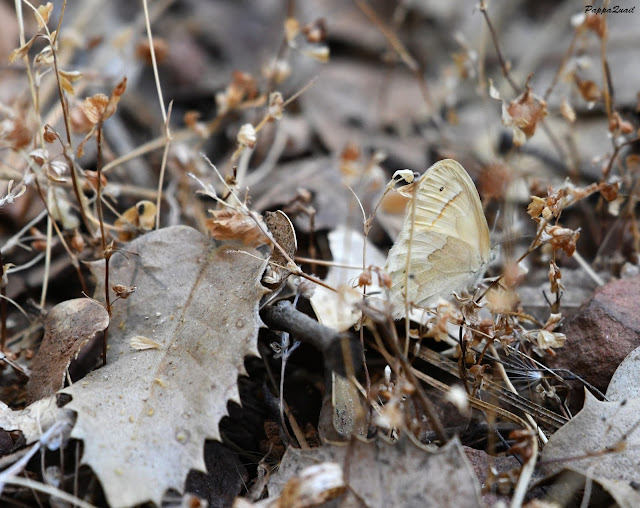 The foothills forest is a mixture of medium size pines and broadleaf trees, of which the most dominant were the oaks, but the most outstanding were the madrones. For a good stretch of the trail we walked through a wide madrone tunnel and the sunlight filtered through, immuminating everything in pinkish-red light. 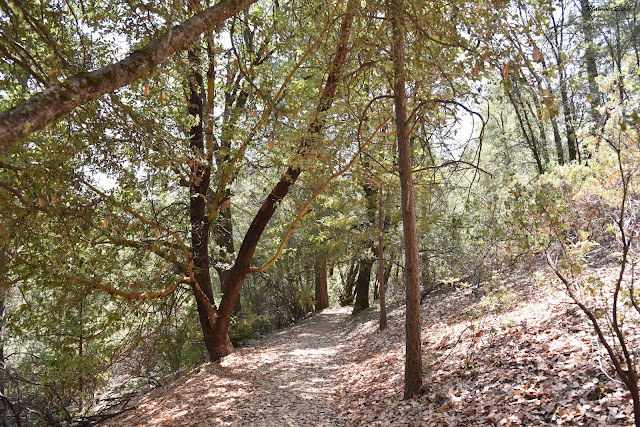 The madrone, as its relative the manzanita, has very thin bark that peels off annually, revealing a greenish-red new bark underneath. This bark is so thin that it allows light through, enabling the tree to stem-photosynthesize. 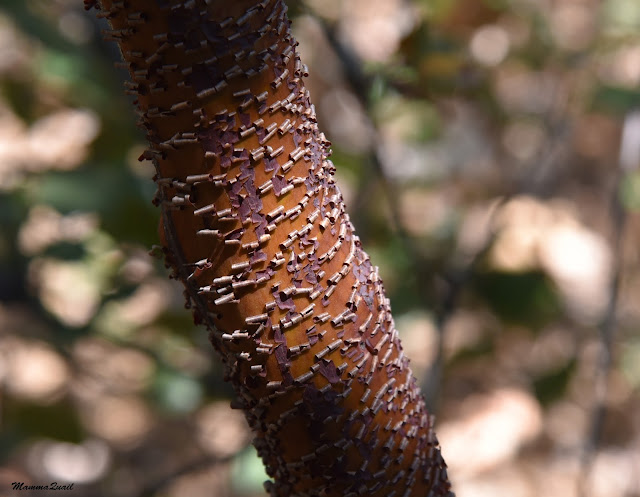 But the madrone is too smooth for the cicada. As soon as we got to area with more pines we found the empty skins of cicada nymphs left attached to the tree bark when the mature insect broke out and took to the air and to deafening park visitors.
My elder chika started collecting them off the tree. She found immense pleasure in arranging them in my hair. 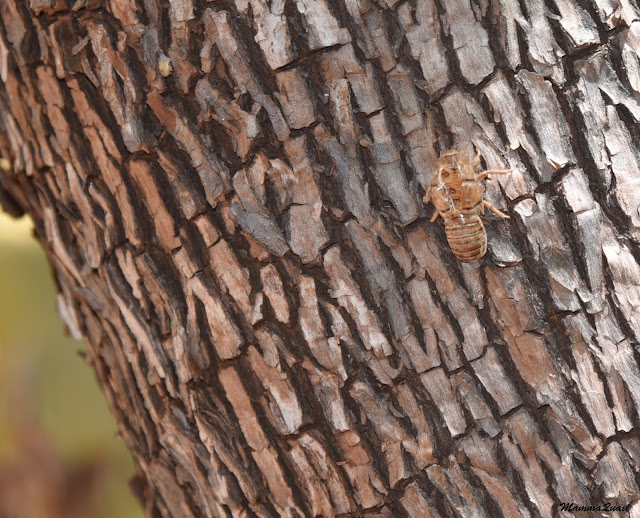 We turned the curve and were walking on the south-facing hillside. Almost immediately the madrones were replaced by their hardier relatives, the manzanita bushes. The manzanita must have it really nice there, south slope and all, because they looked pretty big and happy. 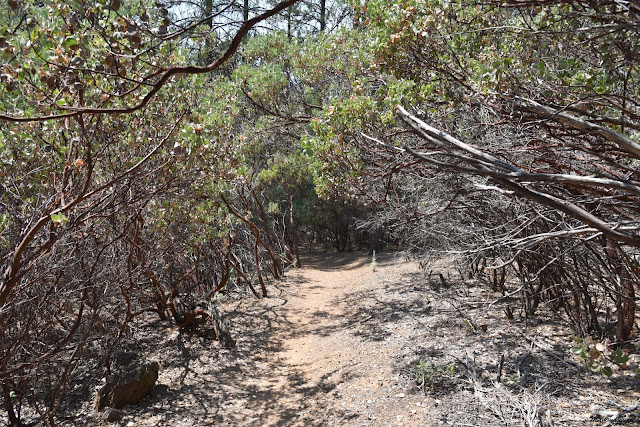 And most of them were bearing fruit, too. Manzanita fruit are edible and I tasted some. They were quite dry, though, and not very appealing. I guess we came a bit too late in the season. The Miwok used to eat them and make drinks from them.
Below the manzanita were mats of mountain misery - another hardy shrub. Good thing that the trail was well maintained and we didn't have to rub against them.
After the manzanita path we found ourselves walking in a clearing dotted with young pine trees. At that point we found out that we didn't have much water left. Most of it, in fact, was still in the backpack I carried. It was a hot day and I was pleased that my daughters were drinking a lot. 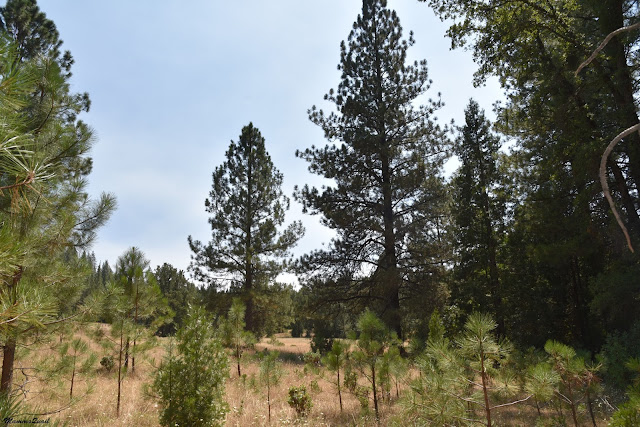 Almost too soon we came out of the vegetation and into a much larger clearing with several old oaks. Below the pass was the reconstructed Miwok village of Chaw'se.
We spent some time resting in the village, admiring the traditional tree bark houses and the woodpeckers in the trees, but mostly removing thorny seeds that hitch-hiked on our clothing.
Next to the houses was a planted patch of milkweed. It is still being used for making ropes in tribal workshops and gatherings, It is also a favorite plant for monarch butterflies to lay their eggs on: the toxic sap of the milkweed renders the caterpillars toxic too - a strategy to deter birds.
A small, grayish bird was creeping up one of the large oak trees. Papa Quail was excited: his previous photos of a brown creeper weren't good enough. Finally he had the opportunity to get a nice shot of the bird (and of the daddy-longlegs it was eating).
After cleaning our clothes from the seeds we continued meandering through the reconstructed village until we arrived at the round house. This is a reconstruction of a community center that the village used to have in the old days. The current building serves the exact same function: a place for meetings, education and ceremonies. 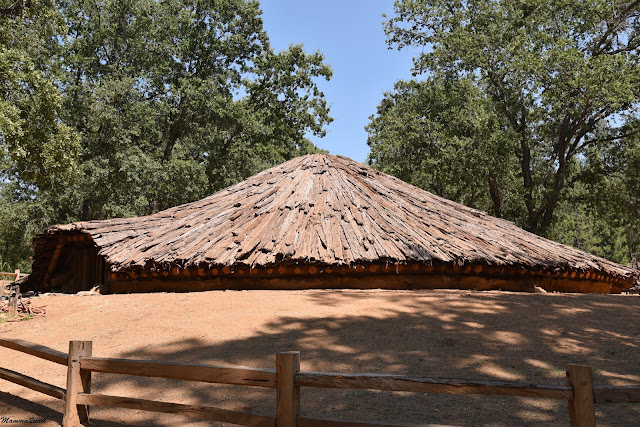 The building was closed when we were there. Near it were a few other families that were looking around, and above us the throaty cries of an acorn woodpecker were heard. This is the loudest inhabitant of the majestic oak grove at Chaw'se.
We had some debate whether we should go back or continue on the South Loop. The concern was mainly the water we had left, which wasn't much. Eventually we decided to go on.
The South Loop Trail delves right away into a darker forest of mainly pines and other conifers. We crossed a tiny creek that still had some moisture in it, and there we saw another cute butterfly: the California Sister.
The trail was the South Loop but we were hiking a north-facing hillside. The forest was much thicker and shadier. In the heat of that day this was a considerable blessing. 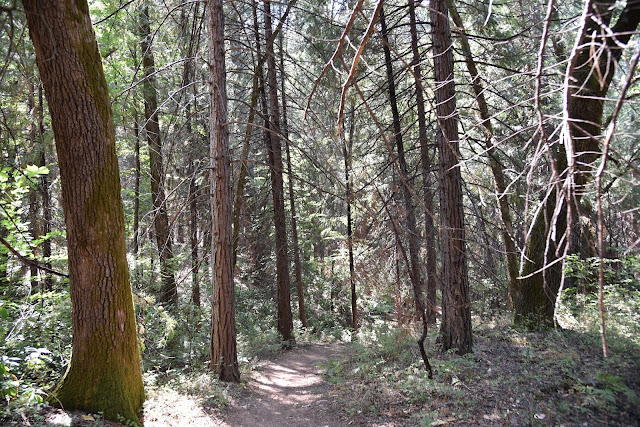 The South Loop is quite short. The youth were all ready to finish the hike and we were going at a much faster pace. I stooped occasionally to photograph one thing or another, but mostly I was just walking along, or swatting off my daughter's hands as she tried to add more cicada shodden skins onto my head.
At the end of the loop we emerged at the park's campground. At last we found a functioning water tap. We filled our bottles and drank as little as we needed: the water tasted awful.
Completing the South Loop we were once again at Chaw'se. This time we walked directly to the park's centerpiece: the large grinding rock.
The grinding rock was the place were the Miwok pounded the acorns they gathered in the fall. This wasn't only a place of work but also a place of socializing while working. Acorn pounding was a whole tribe activity and a perfect opportunity for people of different villages and family groups to reconnect, exchange information, play together and relax, and possibly creating new core families :-)
But most important: to prepare enough acorn meal for the upcoming winter. The acorn meal hat to be leached in fresh water to wash all the tannins away before it could be consumed. Then the meal was dried and stored.
This grinding rocks are found throughout California where the Native Californians had acorns as their staple food, but the one at Indian Grinding Rock SP is no doubt the most impressive one available for public view.
That was our last stop in the park. We moved back toward the visitor center, saying goodby to the bark houses and the ground squirrel that climbed one of them after it figured it won't get any food from us.
Indian Grinding Rock State Park is a small park with a small trail system, but with important legacy and on going cultural and educational value. People who wish to know California and its original people are more than encouraged to visit there.