Third of Three: Inside and Out the Marble Cave of Oregon

The rain that begun when we left the Klamath National Forest had followed us into Oregon. Although we did do a short hike to Hobart Bluff at the Siskiyou-Cascade National Monument, we looked for an alternative plan for the following day. My idea was to go underground and after dinner I did an online search and the closest place I found was the Oregon Caves National Monument. Pappa Quail convinced me that two hours drive is enough of a vicinity, pointing out that we really didn't have any other alternatives to hiking in the rain or sitting in the hotel room all day long. Thus we packed ourselves early in the morning and started weston a slow and foggy road over the Siskiyou Mountains.
The cave has regular guided tours and there's a recommendation on the website to book the tour in advance. Not sure when we'll get there we didn't. On our way there we passed a sign for a nature area. I didn't pay much attention to it (my mind was on the road) but Pappa Quail made a mental note of it.
When we arrived at the park we found that the parking area is a good walking distance from the visitor center and the cave. Not knowing how things worked there we walked up to the visitor center. There was no wait so we got tickets for the upcoming tour starting in about 20 minutes and Pappa Quail had to run all the way to the car and back to get a backpack and my camera (he wasn't planning on carrying his). Meanwhile I had my shoes wiped well (to prevent any transfer of a certain bat disease from previous caves I've visited). When the time came we gathered with the rest of the tour group outside the visitor center. The guide gave us an introduction and took us up the trail to the cave's entrance.
Everything about us was moist and lush green, looking very different from most of California. It seemed even more green than the North California region of which the Siskiyou Mountains are part of.
Our guide told us that this cave was special - it was a marble cave (that is, caves formed in marble rock), one of only three found in the US. When she named the other two I exchanged glances with Pappa Quail. The other well known marble cave is the Crystal Cave located in Sequoia National Park. I visited that cave twice before - once with Pappa Quail and a friend before the chikas were born and a second time when I visited Sequoia NP with my sister and her family four years ago. The third marble Cave in the US is located in Great Basin National Park in Nevada, which is probably the most remote National Park in the contiguous US. We had been there too for a one day visit twelve years ago, and we went on a tour of that cave as well. Now, without prior planning, we were about to complete the series. We were ready to descend into our third marble cave out of three that don't require a passport to get to.
I was surprised that we were allowed to take photos inside the cave, and I made the best of it. My camera Isn't all that great in low light conditions but I took a gazillion photos and a few came out ok.
Right when we entered we saw a bat. That was the only bat we've seen that entire tour.

The cave formed when over millions of years the rock was dissolved by the low concentration of weak carbonic acid in the water that seeped through from above. Holes, rooms, and halls were hulled in the bedrock.
When the water level subsided, stalactites begun to form, with calcite depositing one layer after another, in a slow process that continues as long as the water keeps dripping through the same hole.
If the water dries too fast the calcite is deposited at the bottom, creating a stalagmite. Stalactites and stalagmites grow toward one another over millions of years and if the process isn't disrupted, they eventually meet to form a column.
When the flow is just too fast for dripping there forms a flowstone. Smooth, and flowing still (in a geological pace), and shining in the cave electric lights.
The first explorers of this cave used candle lanterns and didn't see much about them. Candles introduced smoke to the cave. Later electric lights introduced algae growth. It didn't come out in my photos but it was there - little green strands of algae here and there in regularly illuminated spots.
The first explorers of the cave also were not keen on the preservation of its natural state and beauty. They collected pieces of rock formation, touched and killed the living rock (the skin oils block the water flow and stops the formation growth), and left markings and graffiti on the walls accessible to them. The most prominent one was left there by the geologist Thomas Condon and his students who explored this cave in 1884 and signed their names on a flowstone. The graffiti was later glazed over by the continuing flow and deposition of calcite, making it impossible to remove and leaving it visible for many years to come until it'll finally fade into stone.
Our guide led us along the modern cave path through a labyrinth of meandering cement trails, metal ladders and flights of stairs. She would stop in set places and talk about the cave and the formations around. I would take the chance and look for all kinds of interesting sights.
The guide shone her flashlight at a pretty formation (alas, broken at the tip) and said this one was called "The Scream" after Munch's famous painting. Once seeing it, I couldn't unsee it!
Then she pointed at a tall metal stair ladder and said that the prettiest formation are in an upper chamber at the top, and invited those who wished to climb to go up there and take a closer look. Naturally, we all did. I stayed behind to take some photos after everyone else stepped down. Indeed, that was the prettiest chamber in the cave. The beautiful draperies formations looked very appetizing, like flowing cream.
From the top of the ladder I had a n excellent view of the large chamber below and the cement trail cutting through it. 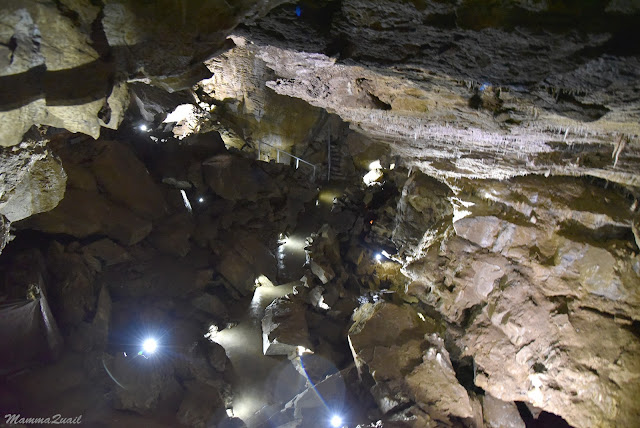 The flowing cream chamber was the highlight of the tour. After that we begun our ascend toward the cave's exit. The guide stopped at a couple more places to show us interesting bits. Once was a box with bones of a bear that fell inside the cave and died there. She mentioned that other animal bones where also found inside the cave.
The other thing she showed us, already in the tunnel leading to the blasted, human-made exit, were daddy long leg spiders on the tunnel walls. We started with the bat and ended with the spiders. That was the wildlife display of the Oregon Cave.
Outside were had a choice - to go down by the direct and quickest route or to take the little over a mile trail that went around the and over the mountain side before turning to the visitor center. That trail, said our guide, was the only one open for hiking because at the time the others were still covered with snow.
The chikas wanted to head down right away but Pappa Quail and me chose to hike. After some grumbling on the chikas side we started walking down the trail. 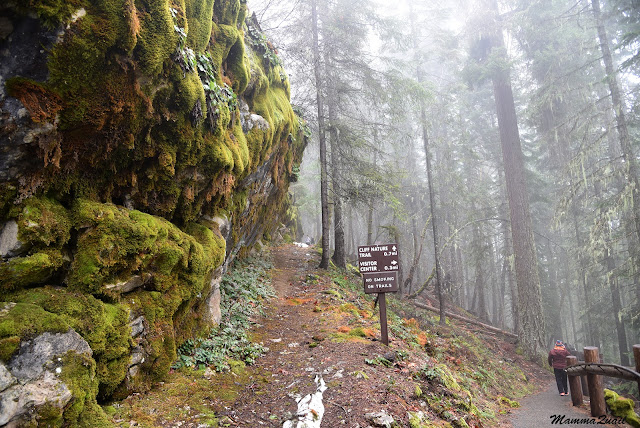 The rain seemed to have paused but everything was wet and the air was dense with clouds and mist. Moss was thriving everywhere - on rocks and trees.
Ferns also thrive in moist conditions. I loved the contrast of the green ferns against the reddish fallen leaves ground cover.
Here and there I saw snow queen flowers in bloom - the same wildflowers I saw the day before along the Hobart Bluff trail.
From the cave's exit we were hiking uphill on a mild sloped, meandering trail. The clouds became darker again and the rain resumed. When we got high enough to peek over the tree tops we couldn't see anything below. the heavy clouds had blotted out all the view. 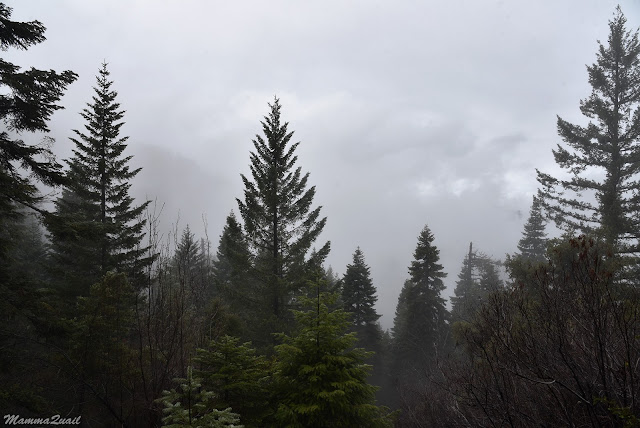 We ascended slowly up the hill, arriving eventually to a nice vista point from which we could see only the nearest trees and a big gray cloud hanging over the valley below. There were some picnic tables and benches, all drenched, and pretty looking rocks. There were also a couple of other hikes wearing plastic ponchos over a summery attire. The elder chika chatted with them a little while Pappa Quail tended to the younger one who wanted to finish the hike already, and I was looking for little things of interest on the ground, such as snails (only saw one empty shell). 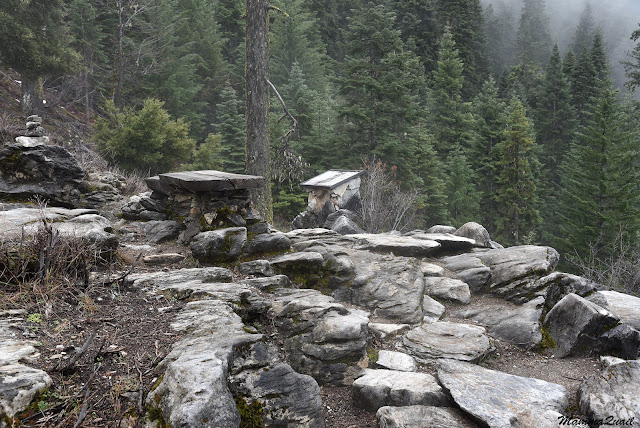 We found something else at the top that got the chikas more excited than anything they've seen earlier - there were snow patches on the ground! The chikas wanted to go and play in the snow but we didn't want them to stray off the trail. They settled for tossing a couple of snowballs at each other and then we continued on. 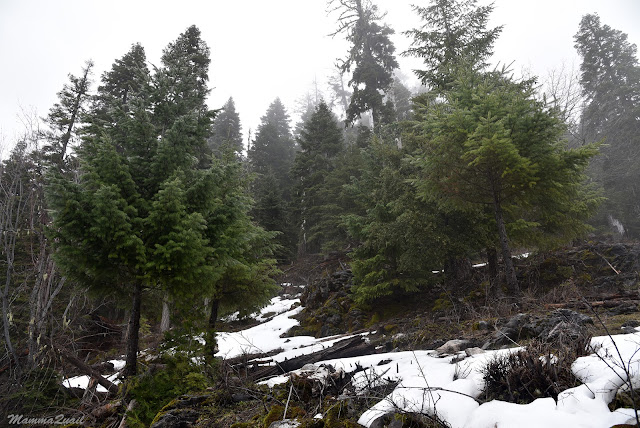 It was all downhill from there. In a good sense. Going downhill was on a much steeper slope and we had to take care not to slide on the muddy trail. 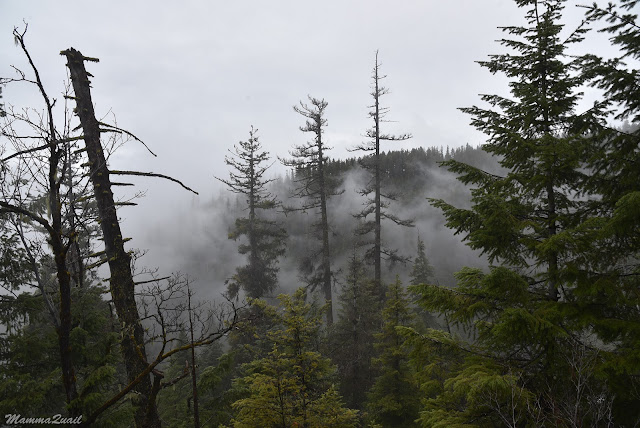 Also the rain intensified. The lichen-coated trees were dripping water, and the mist and gloom gave the forest the appearance of a Grimm Brothers tale. 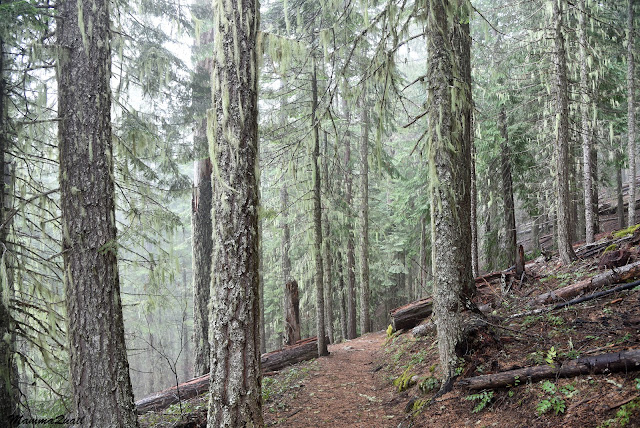 I could imagine the Babayaga's hut between the trees ... Fining the witch's butter fungus growing on a fallen log only added to the atmosphere of an enchanted forest.
But this was no European ghost-haunted landscape but a lovely American west coast forest. No better reminder of that than the pacific madrone with its gleaming red bark shining through the gray mist.
We returned to the visitor center and retrieved our backpack (we had to leave it in a locker - no packs are allowed inside the cave), found that the park's cafeteria was closed for the season, and walked down the road to our car. 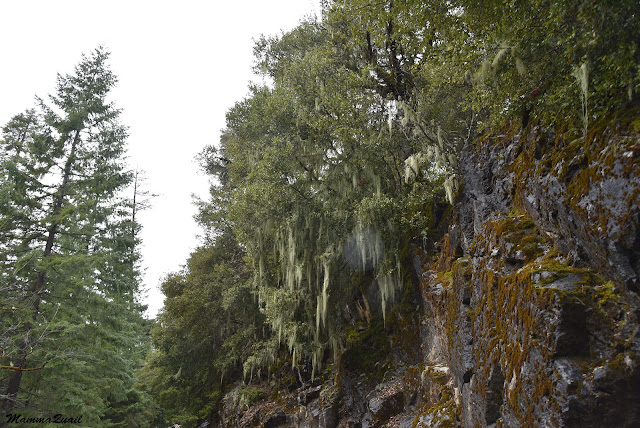 We dove to the nearest town, fittingly named, Cave Junction, where we found a place to eat and think of what to do next. Then Pappa Quail suggested that we'd explore the nature area we've passed on our drive to the park. It seemed a good suggestion. After a good lunch even the chikas were fine with it. So off we went, to explore some more of Southern Oregon.