A Vista Point of the PCT: Hiking to Hobart Bluff at the Siskiyou-Cascade 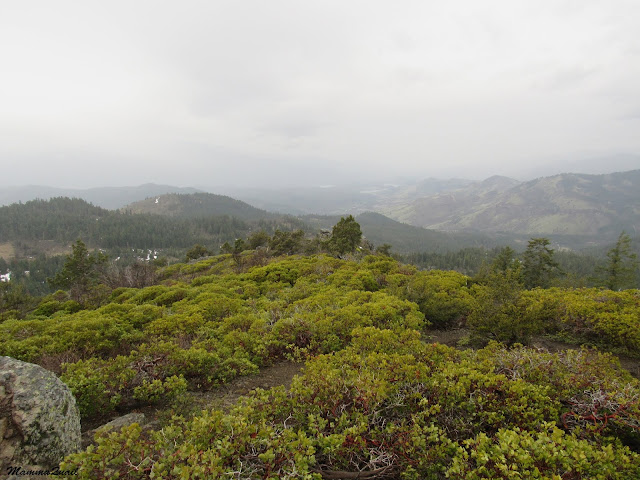 Last spring break we took the opportunity to explore the Klamath area - a region of California that we had never been to before. For three days we camped and hiked along the river and had beautiful weather. When we left the Klamath to Yreka the weather changed to overcast and rainy. The next couple of days we were planing to hike the Siskiyou-Cascade National Monument in southern Oregon. There was rain in the forecast but it was so for all of of the West Coast and it was pointless to divert our planned route.
When we left Yreka in the morning of April 5 it was cloudy, but not rainy. The drive on I-5 was quick but then we had a very slow drive through the narrow and winding mountain roads leading to the Siskiyou-Cascade. By the time we arrived at the trailhead I wanted - that of Hobart Bluff - it was raining again. Moreover - there was snow still on the ground. Large patches of it.

It was cold and misty, and I felt miserable. Unlike my usual self, I was ready to turn back and spend the rest of the day in the hotel's hot tub. But Pappa Quail urged me to hike. He argued that we don't know when we'll be back there again and we might as well look around. The chikas weren't very enthusiastic about walking in the rain but the sight of snow on the ground encouraged them to get out of the car too. So we donned our raincoats and prepared for a rainy hike. Pappa Quail decided to leave his birding camera in the car - he didn't expect to see any birds in this weather and he didn't wish to risk damaging his precious camera. I left my usual camera behind too, taking with me only the little point n' shoot that we got after the disaster at the Mormon Rocks a year and a half before. I tucked the camera inside my coat and pulled it for quick snapshots every now and then. There are only a few photos here, and they aren't the greatest, but they do show the place as we've seen it that day.

The first segment of the Hobart Bluff trail overlaps with the Pacific Crest Trail (PCT). We hiked a bit of the PCT two days before near Seiad Valley and I was amused to hit it again in a completely different area, in a different state.
Here, in contrast of what we saw at the Grinder Creek segment, the trail was completely clear of fallen logs and very easy to tread. Mostly.
The trail wasn't easy to walk in the places where it was covered with snow. Fortunately for us, the snow cover wasn't much, and most importantly - it wasn't in steep areas that would have made crossing it dangerous. 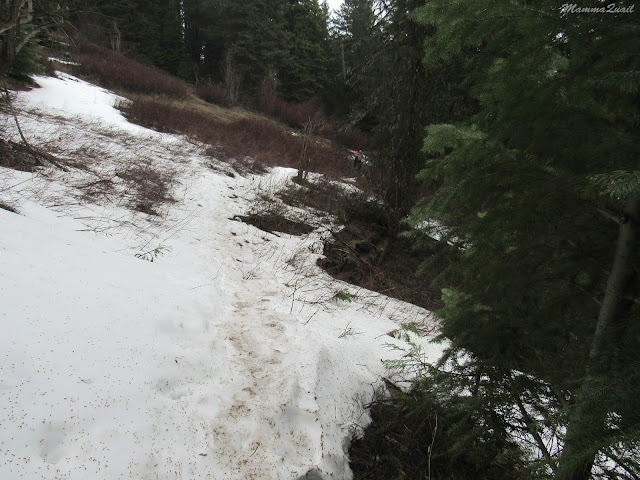 We simply walked slowly, careful to stick our heels deep for stability. The elder chika was gliding over the snow just like an elf. The rest of us were more careful.
It was old snow, already dark with dirt and covered with shodden male pine cones. The rain wasn't helping it either. That's how early spring looks like in this area. 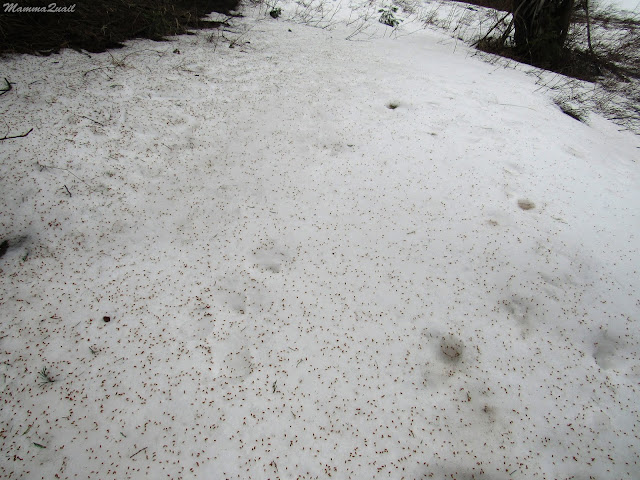 After less than mile we reached the fork that detached from the PCT, leading us uphill toward the bluff. There wasn't any snow there anymore, and the rain intensified and weakened every few step, so I kept my little camera under my coat for most of the way. 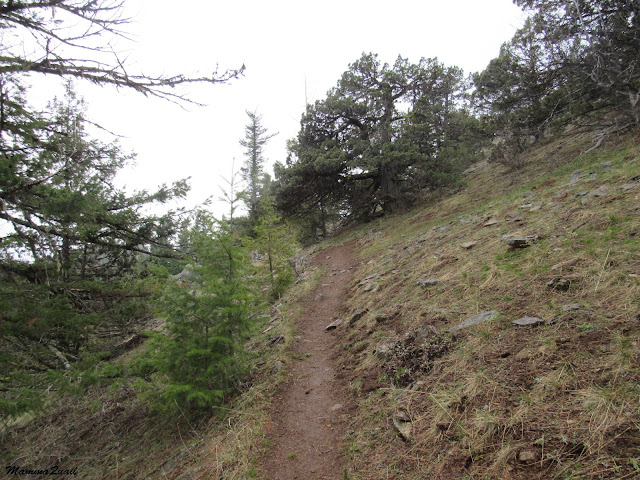 Whenever the rain eased a bit I risked pulling my camera out and taking photos of the view. Many of the photos came out blurry, either because of poor lighting or because of an annoying droplet that got to the lens. I had to wipe it frequently. Still, I got a good augmentation of my memories of this area. 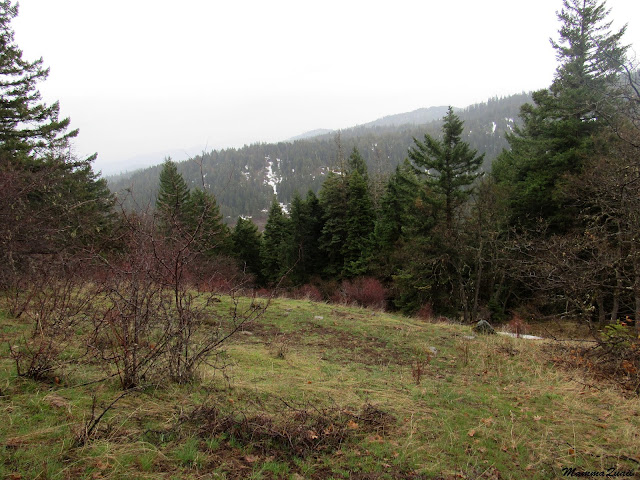 For the most park our hike felt like walking inside a thick, wet cloud. The rain wasn't strong, but it was incessant. The ground was soaked, but luckily not muddy. The light volcanic soil absorbed the rain, wicking it away from the surface. Despite the heavy moisture there was hardly any surface runoff. Wisps of cloud rose from the ground like ghosts between the trees. The colors were intense, the vegetation greens contrasting with the dark, earthy browns of the rocks and soil, and the occasional rusty red shrubs. 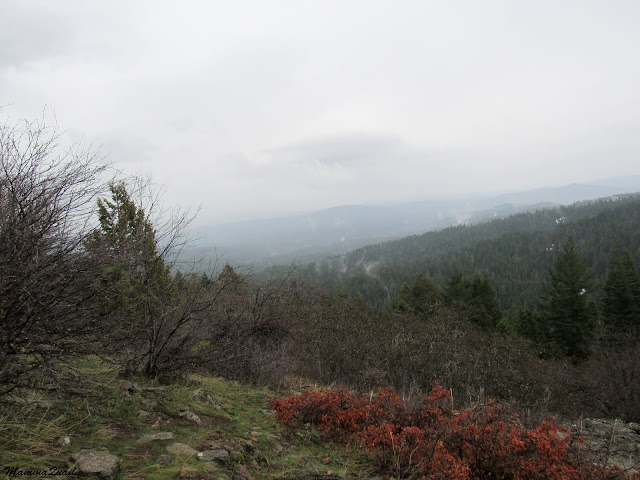 Near the summit the trail fails. Not that it wasn't there, but there were plenty of other foot paths, making it nearly impossible to identify the official trail from all the rouge ones. There was also a wilderness campsite there, I assume of use for PCT backpackers.
After some trials and errors we found the trail leading to the summit. The rain paused enough for us to get a good look around. The view seemed the same in every direction - soft cloud-donning mountains patched with dark forests separated by narrow, light green vales. A silver, winding line indicated a road. We saw no cars on that road.

The nearby sights were also worth attention - the top of Hobart Bluff was covered with low cushions of juniper and manzanita, but with dark red branches and lush green foliage.

We were surprised to find a couple of other people on the summit, mainly because until then we had the impression of being the only humans in the area. They were coming up to the summit just as we were going down, and seemed unsure if the trail. We reassured them that they were on the right track and continued downhill.
In the Siskiyou-Cascade spring was just beginning. The snow was melting and the grasses greening up. It was way too early to be expecting any sort of a bloom show, but there were a few ephemerals about, little and unassuming. they were also very difficult to photograph, especially with the lesser camera I was using on that hike. I did try my best, though.

One particular flower was blooming in small patches along the entire trail. It was very close to the ground and its purple bloom was almost camouflaged by the background of reddish-brown fallen leaves. I took many photos of this little spring flower, but only one came out ok.
It is a short trail to Hobart Bluff. I am glad that Pappa Quail insisted on hiking it - it gave us a good idea of how the area looks like and what can be found there. Besides, as we walked on my spirit rose with each step and by the time we made it back to he car I was content and happy to go check in our hotel in Ashland. Pappa Quail knows me well - had we missed on that hike I probably would have been in a sour mood for the rest of the day.
The forecast for the morrow was rainy still, and stronger too. Now I had plenty of time in the hotel to figure out what to do on the next day. Already on the way to Ashland my mind kept going to the one rain-protected hike possibility - underground. Where there any worthy caves in the area? I should find out.