April 6th begun with rain that sent us looking for an underground adventure at the Oregon Cave National Monument. The cave tour and the little hike we did after that were very rewarding but the day was still young and we wondered what to do next. Pappa Quail suggested that we stop at the Eight Dollar Mountain Botanical Wayside that we'd seen on our way to the cave and check it out. The rain had stopped and it seemed like a good idea so after lunch we headed back east on Rte 199, found the place and parked at the pullout parking area.

There is a road that leads to the nature trail but it was blocked by a gate, so we started by walking up that access road. I looked warily at the heavy clouds that hang above us, but nothing was coming down on us. Not yet, anyway.
The area flanking the road didn't seem al to special but it was pretty. The vegetation community was of thin pine trees and manzanita bushes, to low to be called a forest and to sparse to be called chaparral. The manzanita were booming - their creamy pink bell-shaped flowers hanging in bunches like tiny lanterns.
In between  the manzanita I detected white-flowering bushes. Serviceberry - like those we've seen Near Happy Camp earlier that week.

The chikas were walking ahead of me and soon spotted little flowers blooming under the larger shrubs. A small, white violet with purple markings. I think there might be more markings there in ultra violet perhaps, visible to the bee eye.
The elder chika had the best photo of this tiny violets.
And the sure sign that this was early in spring still - a phlox in bloom.
The botanical trail is a boardwalk, elevated over a sensitive wetland area. This area used to be a quarry and has been rehabilitated to a magnificent nature area under protection. 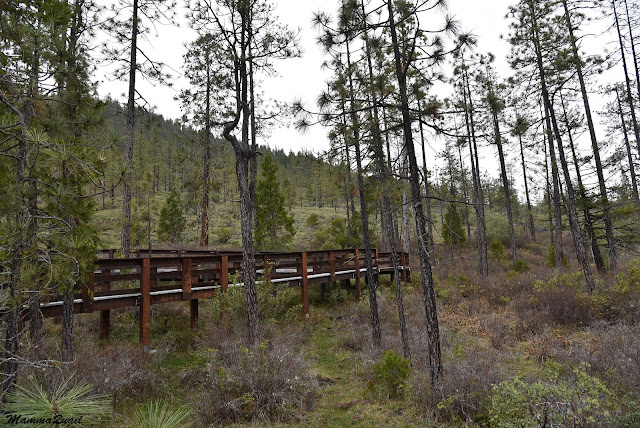 The chikas went ahead with Pappa Quail. I lingered behind to admire the scenery. The clouds were hanging low still, but so far - no rain. 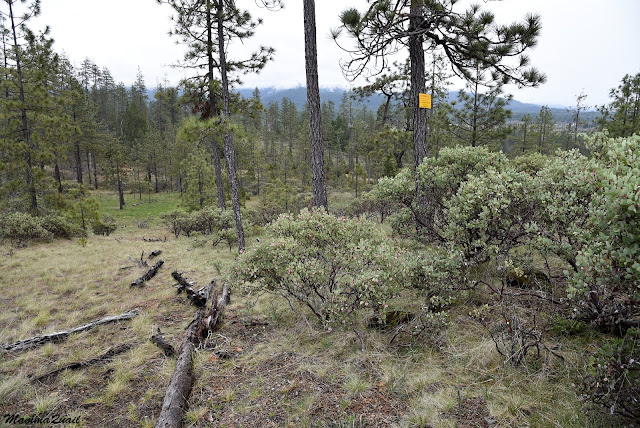 The area between the pines and manzanita was green with grasses and other herbs, and dotted with wildflowers. The gray illumination and the elevation of the boardwalk over the field made it hard for me to get a good wide-angle shot of the bloom. 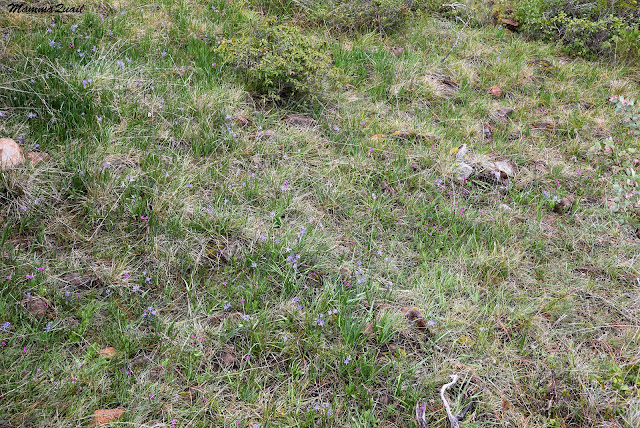 With his birding big zoom lens Pappa Quail had much better results. All that time I thought he was looking for birds he actually was photographing flowers for me. It was a great pleasure to see the bouquet he photographed for me that day :-)
The flowers were a bit more concentrated along a tiny creek that trickled downhill. Camas lilies and shootingstarts marked the line of water. 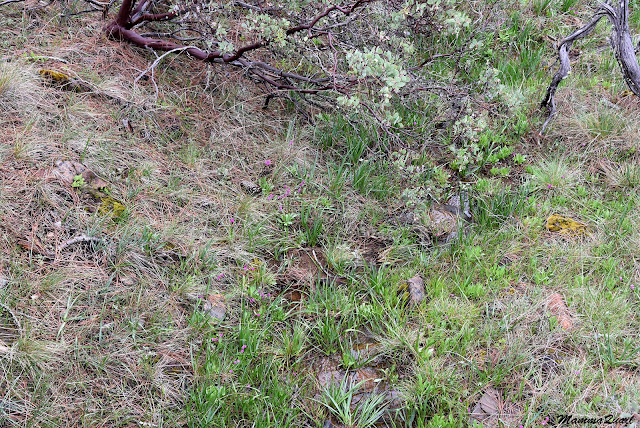 Here too Pappa Quail got the better shots.
At its end the boardwalk widens into a porch, providing a view over a large patch of brown plants. Pappa Quail and the chikas were waiting there for me, looking all excited. I was disappointed at first, not realizing what I was looking at. Then I took a closer look.
It was a field of pitcher plants! Now I was excited. Really excited. It was my first time seeing a carnivorous plant in nature. And here was a whole patch of them!
Carnivorous plants grow on nitrogen poor soil and supplement their need of fixed nitrogen by digesting animals. The pitcher plant does so by producing pitcher-shaped leaves into which it secretes a digestive liquid. This liquid is protected from dilution by rain with a 'hood' that's the extension of the leaf. Insect or other little critters attracted to the pitcher and slip into it drown and get digested by the plant.
This particular plant is named the California Pitcher Plant. And there we were, visitors from California seeing it in Oregon.
Most of the plants in the field were brown but a closer look revealed many new pitchers growing through the blades of grass. I suppose that later in spring this patch looked more appealing. Still, this was quite a sight!
The boardwalk is an in-and-out trail so after a long stop at its end to appreciate the pitcher plants we turned about and started walking back. 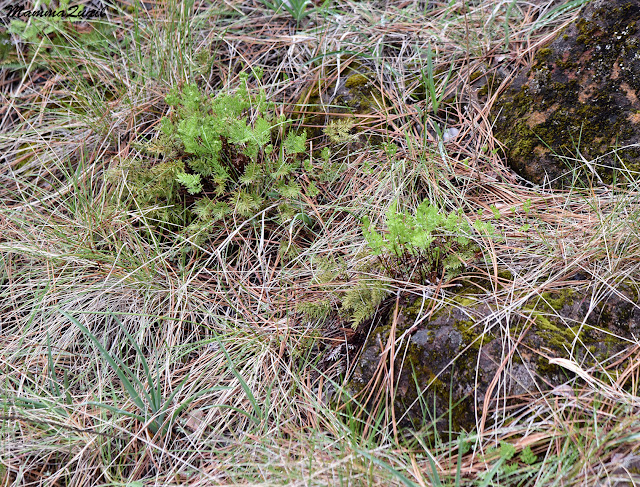 Although the path was the same, it was an opportunity to catch sights that we've missed on our way in.
It was on our way back out that I had noticed the fritillary way up the hill. Pappa Quail was already ahead near the end of the trail when I yelled for him to come back. It was somewhat challenging to point that flower to him - it blended so well in the background.
The next individual he seen himself, now that he knew what I was looking for. I'm always happy to see fritillaries blooming.
near the end of our little walk the clouds started having their say and large drops of rain started falling on us. Pappa Quail hastened toward the car. I tucked my smaller camera under my sweater while waiting for the chikas who took their time walking down.

By the time we made it back to the car the rain was going down in earnest. Pappa Quail and I didn't have to talk about it - we both knew there would be no more hikes that day. We returned to Ashland in time to spend the last open hour of the local nature museum with the chikas before calling the day and going to look for a place to eat.
Considering the weather and the unfamiliar terrain I thought that that day was very successful. The Oregon Cave and the Botanical area with the pitcher plants! The forecast for the morrow was of no rain. Although our original plan was to get back to California in the morning and hike in the Mount Shasta area, we decided to change it and try again for the Siskiyou-Cascade National Monument. This time I had my trail of choice ready - we would hike the Green Springs Mountain loop trail.