I have a friend who is a docent at the Mid-Peninsula Open Space Preserve agency. One day he sent out an invitation for an Friday early morning hike at Windy Hill Open Space. I took a second to check my calendar and another to reply with yes. Then I told papa Quail that he's in charge of taking both chikas to school on that day to which he answered with a resigned nod.
Windy Hill Open Space Preserve was a new place for me and I didn't know where it was. Our meeting time was set for 6:45 am and a quick check showed that I'd have to get up at 5:40 am to get there on time At first I wondered the wisdom of my speedy commitment to this hike but then realized that it has been a very long time since I went on a sunrise hike. Moreover, it has been a very long time since I went on any hike in which I wasn't the one in charge. So on Thursday evening I set the phone's alarm app, prepared my backpack with water and some snack, filled the kettle, and went to bed earlier than usual.
It was dark when my phone started shaking. I turned if of and rolled out of bed before being tempted into staying there. I dressed up quietly, filled my thermos with tea and sneaked out of home without waking any of the quails.
It was still very dark when I arrived at the Windy Hill parking area. My friend was there already, rubbing his palms and pouring his hot tea from a thermos into a cup. He said there should be about ten people in the group but when time came to get on the trail we were only five.
At 7:00 am it was still dark and most of my photos didn't come out right. Still, my eyes were quickly used to the low illumination and I spotted some interesting things along the way, some of them came out all right on camera at a close up, with the flash on.
We started uphill on the Betsy Crowder Trail at a fast pace. Much faster than I usually go when alone, unless in a hurry for some reason. The brisk pace warmed me up. Then another one of our group stopped and called us to see something on the ground: it was a solitary California newt moving along the side of the trail.
We ket ascending on a mild, yet steady slope. Then the trail leveled and the view opened up. The hill was illuminated with a soft, pre-dawn light.
Far away the eastern horizon began to glow in soft orange and yellow.
We turned onto the Spring Ridge Trail, which sloped up and plunged into the woods again. Once more we were in relative darkness. 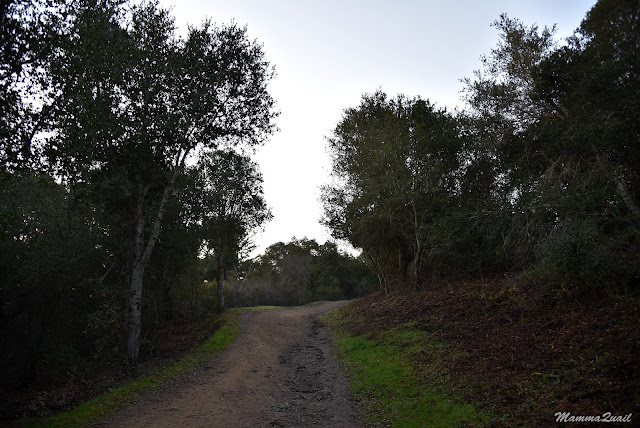 It wasn't as dark as when we started, and I could see better and farther between the trees. Already keelung and eye out for wood rat nests, I was thrilled to see one, perfectly shaped, a pyramid of sticks on the ground. The rest of the group showed a mild interest, then moved on up the trail. I snapped a few shots and hastened to catch up with them.
My friend didn't plan to take us all the way up the hill. he lead us to the trail intersection with the Meadow Trail onto we'd turn to go down hill. There, at the highest spot of the hike, we stood silently and waited for the sunrise.
A clicking sound came from the top of one of the trees below us. It was a sole dark-eyed junco perched on the very top of a tree and chirping loudly.
Then the sun popped out in the east (see header photo). Then, just as we were about to start our way down, another hiker came up the trail. She also was a docent. She paused and offered to take a group photos of us all, then continued to chat with us for a few moments longer, giving us information about other nice places to see in the area.
Eventually we started downhill on the Meadow Trail. The light was getting stronger each minute and I could see the line of sunlight getting closer and closer until we met.
More birds were active now. I could hear them all around us. Sparrows, towhees, jays. A spotted towhee perched close enough to us so than even with my broad lens I could get a decent photo of this pretty bird.
It was easier taking photos of the fungi now that the daylight reached the forest floor. 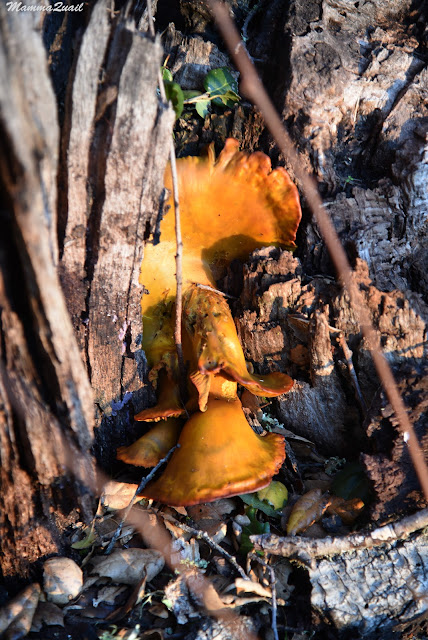 I saw many mushrooms on that hike. Not as many as I've seen on hikes in previous years, but still a good number. The forest smelled heavily of fungi.
We reached the meadow and crossed a wide dirt road leading to private land. I was very impressed by the large trees that grew on the side of the meadow. We didn't get near them, however, and I didn't identify them. 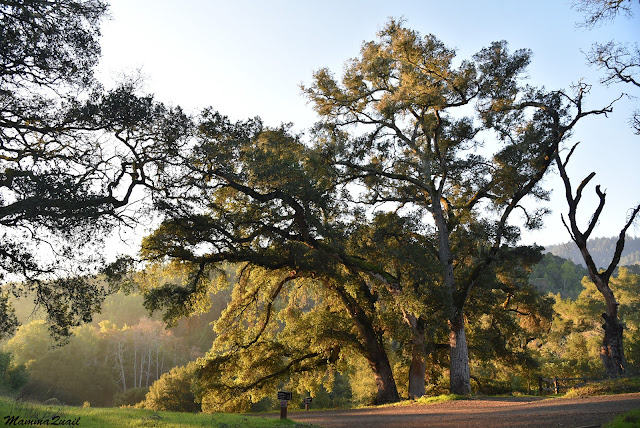 The trail leveled off and once again we were out in the open, now walking in full sunlight. 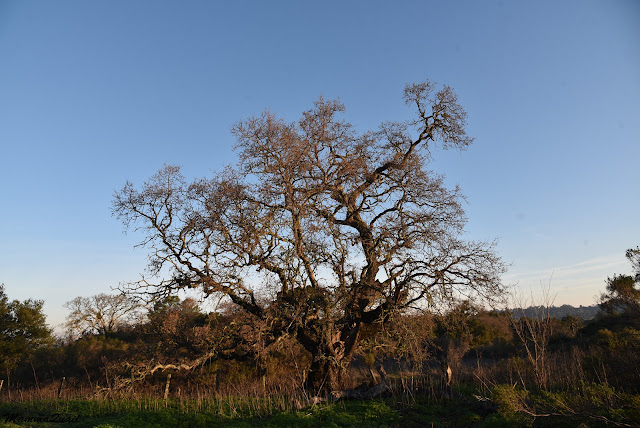 But we turned on the lower part of the Spring Ridge Trail, heading north in the direction of the parking area. 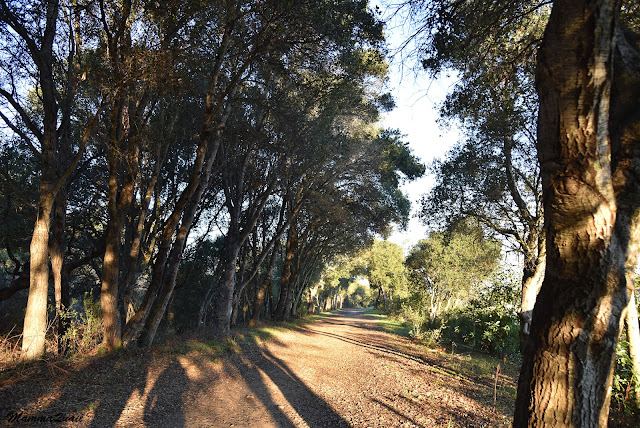 To the west of us lay a pond, its water very calm. A single bench stood by the trail, overlooking the pond. We went down to look at the water, then u to the bench were we sat down.
One of the hikers pulled out a large thermos, poured tea into paper cups and passed it around. I pulled out my own thermos and we sat down, chatting and sharing an early morning tea time.
There were a few ducks in the pond, all of them mallards. They glided silently on the water surface, hardly rippling it.
We finished our tea and hiked over to the parking area. There I found some mushrooms that I missed when we headed out in the darkness.
We completed the hike much earlier than my friend had expected. He suggested we do this (a sunrise hike) on a regular basis and, seeing our pace, suggested going on longer trails. I'm all for it!