Hiking Down the Ditch: Down Digger Creek to the Sacramento River

A century and a half ago prospectors came looking for gold in the mountains near where today is the city of Redding. The river was down below and fetching water a hard work so they dug a ditch to bring water from the high sources to the little mining settlements along the river. In the modern days this ditch was converted to a lovely hiking/biking trail that stretches from the Shasta Dam all the way down to Redding.
Last June I was planned to take my family hiking group on a camping trip in the area and the Ditch Trail was high on my list of hikes to take them on so some days earlier I went there to go on a solo prep hike.
The blooming toyon welcomed me as I started down the trail.
It was a hot day and I liked the shaded trail I was walking on. It was level at first, but then plunged into a few down-sloping switchbacks. 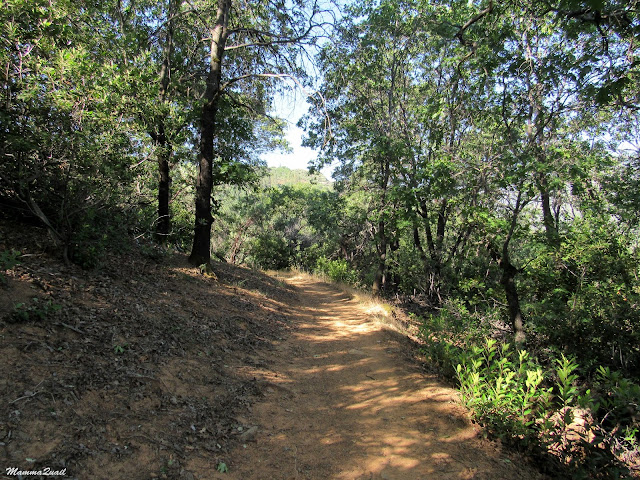 Alongside the trail bloomed the Saint John's Wart in large numbers. Not the native species, however, but an invasive European one.
When u visited the area in April with my family the redbud trees were in full bloom and no foliage. Two months later they all had their large, butterfly-shaped leaves, with clusters if red seed pods dangling from their thin branches.
The redbud can be quite spectacular when blooming and very pretty still when laden with fruit but as far as blooming shrubs go, the mock orange was the favorite of my hike there. Its delicate white flowers reminded me of fresh snow flakes - a cool relief in an otherwise very hot day. I came across this species several times during the hike.
For the first mile I defended through forest of low-canopy trees. I was glad of the shade because the day was hot and getting hotter yet. Most of the bloom I saw along the trail was that of shrubs and bushes. There were some interesting plants blooming there that I don't get to see very often.
But the one blossom that made me the happiest was that of the spicebush. A month earlier it was in its beginning, but come June, it was in its full glory.
While attracted many to flowers I certainly don't ignore other plant beauty, like the cluster of maple fruits like green, balled-up hedgehog.
Eventually the trail leveled off and I was out of the woods. I was still pretty high above the Sacramento River and the vegetation changed to chaparral. I walked under thick power lines that stretched from the valley below all the way up and over the hill. 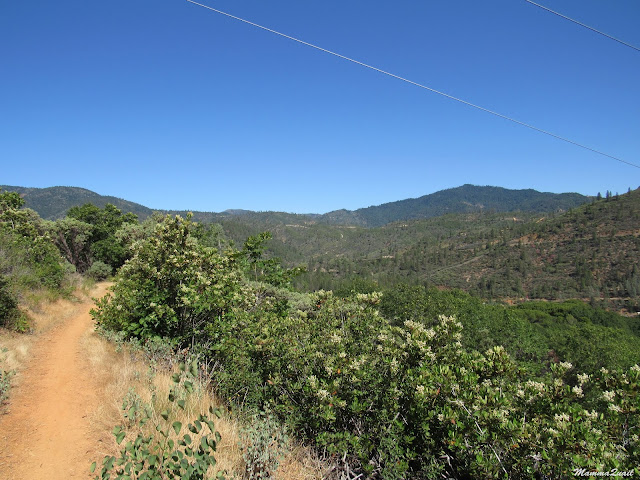 I followed the powerless with my gaze - they originated at the hydroelectric power plant of the Shasta Dam.  I had now full view of the dam, a massive wall of cement and very impressive piece of engineering holding the huge Shasta Lake behind it, loomed over the valley.
I admired the dam for a few moments, then moved on with my hike. The trail curved southward and remained level and high above the river. Every now and then the chaparral changed into patches of low forest, especially when crossing the little creeks that were running down the hill into the valley below. 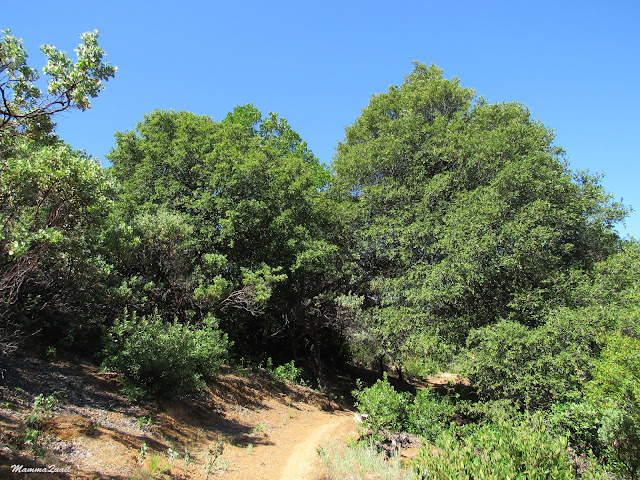 Manzanita bushes were dominant of the hillside. I love the sight of the old red bark peeling off to reveal the fresh green one. Very delicate.
At one of the little creek crossings I passed along my way I saw a large oleander bush. I know this plant very well from the old world - very beautiful but deadly when consumed, even in minute quantities. Despite its toxicity oleander is used in landscaping and sometimes it escapes to the wild. In California it is, of course, an invasive species.
Of the California native wildflowers I was happy to see (and smell) the coyote mint, a flower I've seen in diverse places throughout this state.
Wherever there are flowers there would be butterflies. Not as many as I've seen in the area in May but still very present and very beautiful. Most were also too active to pose for a photo.
Without Pappa Quail around I ay a little less attention to the birds. Some birds, however, are impossible to ignore.

The trail stretched on and on high above the river. At no point did it seem that it would go down any closer to the water. I also couldn't see the trail going uphill that I was looking for. It was much farther off than I had calculated form the general map of the area that I got at the dam's visitor center. It was already clear to me that if I'd take the family hiking group down the trail I wouldn't take them that far. I was enjoying the hike immensely, but I also begun worrying about the time it was consuming - I had hoped to check out Caste Crags State Park too that day.
I tried going faster but found myself stopping again and again to look closely at pretty flowers and other things I encountered on the trail. Some of these wildflowers I don't get to see very often.

And orchids are always a reason for celebration, although the one I saw was broken at the top.
Between the manzanita bushes I got glimpses of the Sacramento river down below, gleaming in emerald. Occasionally the tranquil water would get disturbed by a speedboat zooming by, and a few seconds after the boat would pass the water would resume its lazy course downstream. 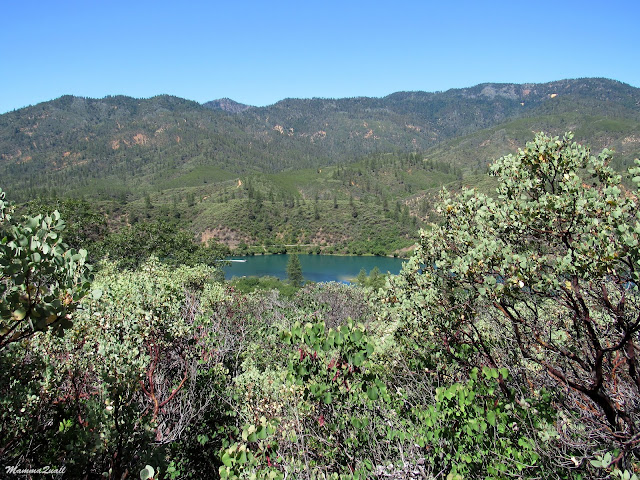 The water level wasn't high although water is let out pf the dam. I wished I had the time to go down to the river and maybe kayak there a bit. I made a mental note to do that when an opportunity presents itself.
I reached the trail fork going up to Chamise Peak and started ascending, going higher and further from the river. Looking back it appeared now as a thick emerald ribbon cutting between the hills. A line of life for the area, indeed for a big part of Northern California.

A few bikers passed me when I was following the Ditch Trail along the river. As I started ascending the Chamise Peak trail they came back, rolling downhill. One of them lost control and spilled on the rocks. He wasn't injured badly but had some nasty looking cuts and scrapes on his legs. I proposed to run up to the peak and phone for help but he was able to get up and go on biking with his friends. I walked on.
Higher above the river the chaparral got much lower and par less a thicket. There were also much less manzanita and toyon and more yerba santa and other shrubs I didn't identify. 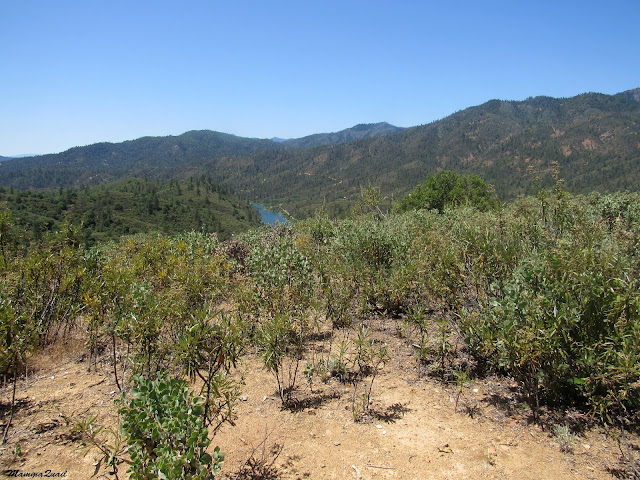 When I made it to the pass I had a surprise - a wonderful view of my favorite mountain in California - Lassen Peak.
A half a mile long trail leading to Chamise Peak forked off the main trail. I sat down for a short break and debated with myself wether I had the time to go up the peak. Looking at the time I decided to leave that for another time. I got to my feet and started downhill on the eastern side of Chamise Peak trail. 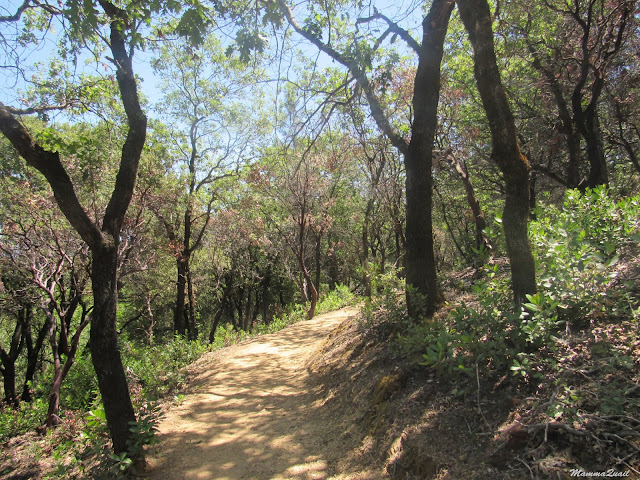 It was about a mile more to get to the road. I walked that mile very quickly, stopping only to admire a penstemon that closed near the trail and to have a little chat with a hiker that was taking her daughters to the peak.
On one of the trees nearby perched a turkey vulture and looked at me hungrily. I assured it I wasn't about to die soon, andthanked it for posing.
I reached the road. There were about three miles between the Chamise Peak Trailhead and the Shasta Dam where I was parked. I relied on hitch-hiking that distance but unlike other times in the past when I was picked up almost as soon as I raised my thumb, no one was in a hurry to give me a lift now. So i walked. I walked nearly three quarters of the distance until an old car with a young couple, a toddler and a dog stopped and offered me a ride. I was already very hot and sweaty, and very much behind schedule, and very much grateful for the lift.
As late as I was, I did take the time to eat at the beautiful picnic area by the dam and admire the view of Mount Shasta under the clouds.

I then took a short walk on the Shasta Dam itself before driving off to Castle Crags. A few days after I was back there with my hiking group. We hiked down to the dam view point below, then back up to walk across the dam and peer down. It was a short and sweet hike, nearly all shaded which was good, because temperatures reached the 90's that day. There's much more to see and explore in the area and I left eager to go back there.

A few weeks after my hike near Shasta Dam broke the huge Carr Fire which devastated the entire area of Whiskeytown National Recreation Area and reached to Redding, laying waste the neighborhood through which I walked while trying to hitchhike from the Chamise Peak trailhead. Such devastation. Such a heartbreak.