At the Eyrie's Height: A Day Hike at the Desolation Wilderness 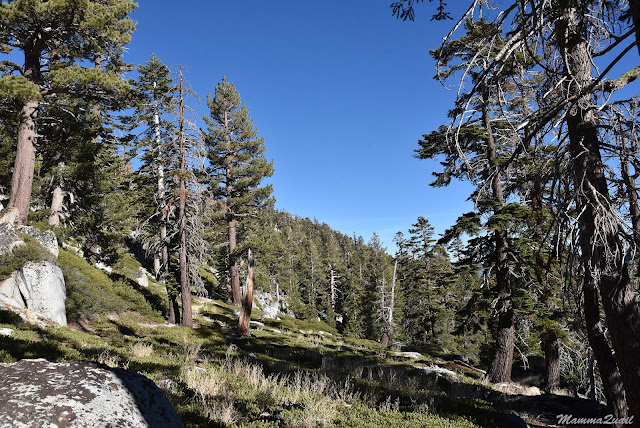 The second weekend of last November we traveled to South Lake Tahoe where in Saturday we hiked at the Emerald Bay State Park and had a wonderful time discovering life at the lake's shoreline. By that night I still didn't know where we'd go hiking on Sunday. Long after Pappa Quail and the chikas were sleeping I kept poring over the maps, looking for a trail that would be just the right length and difficulty level for us, and circular. By the time I couldn't keep my eyes open anymore I had settled on the Eagle Falls trail leading into the Desolation Wilderness, although I was not completely sure how far we should go on it. I was too tired to work out the details.
It was really cold that Sunday morning. We got to Eagle Lake trailhead, got out of the car and quickly bundled up. It was mid-morning already but the freezing air burned its way through our respiratory tracts each inhalation.

The birds, however, seemed more adept than we were. It wasn't long before Pappa Quail and the elder chika started photographing.

Right off the trailhead the trail begins ascending at a steep grade. We usually take our time on steep climbs but being so cold we strode right on, hoping to warm up as we walked. While mostly among the trees we would occasionally come to a ledge with more open view. Looking back I could see how high above Lake Tahoe we were getting. 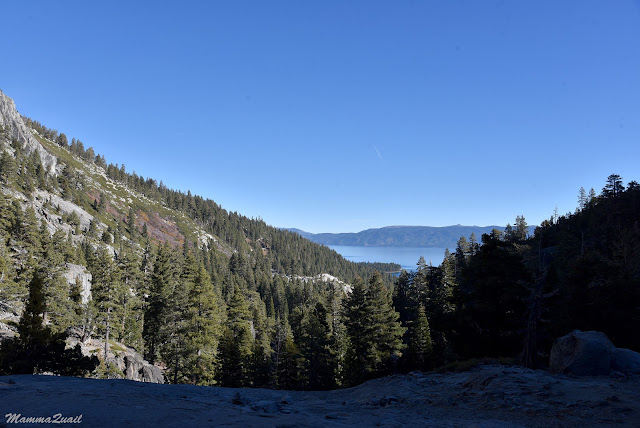 As we climbed so did the sun. More and more we were walking in sunlight and slowly we warmed up and some layers were removed.
Save for a short breather we kept going until we reached Eagle Lake. The trail fork is somewhat above the lake and a short 0.1 mile path leads down to it. It was hard to see the water - it was so calm that it mirrored the surrounding mountains perfect.
We walked down to the lake and slumped down on the rocks by it shore. After us came down another family who hiked right behind us. They didn't stay near for long but went around the lake to find a more private spot.
A small chipmunk grabbed our attention and Pappa Quail got to on camera. 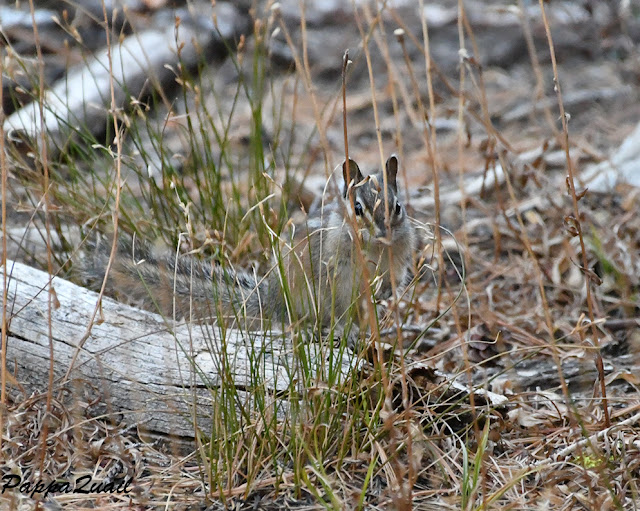 We had a good, long break on the shore of Eagle Lake. It was sunny there and, while not quite warm, wasn't cold either. I gazed at the lake and enjoyed the near-perfect reflections. I was mesmerized by the shimmering reflections of a small island off to the right.
The elder chika said she heard mallards. Lated we saw them - a few ducks (mallards and ducks of another species) floating near the little island, gliding so smoothly on the water surface that they hardly disturbed the reflections.

The short loop trail goes back down from Eagle Lake but we wanted a longer hike. So when it was time to wrap up and go we got back to the main trail and continued our ascend up the mountain, deeper into the Desolation Wilderness.
At one point I looked down at the lake. It took me a moment to find it although it was right below us - the reflection made it almost unrecognizable as a lake.
We kept going up and up among pretty pine trees. An elderly fellow wearing rugged clothes passed us by, running. He wasn't carrying anything with him. Some steps higher we came upon a younger fellow thad called scoldingly after the elderly man that he was irresponsible to go on such a run with no water. The runner, however, went on unbothered. The younger guy was on his way down. He stopped to chat with us a little but then went on his way while we continued our ascend through the pine forest. 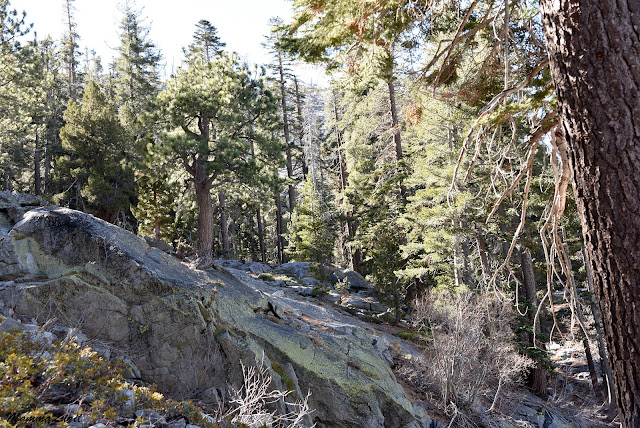 We reached a large rocky ledge and sat down to snack and rest. The view east was grand - were were very high above the lake and the air was crisp and clear. there was no sign of smoke anywhere. It was hard to believe that not too far from where we were the air was hazardous to breathe.
Pappa Quail wondered how far we should go on the trail. I wanted to connect with the Bayview trail and he wondered if that wouldn't be too much for the chikas. The elder chika wanted to turn around and go back. The younger said she wanted to go on. I argued that if we'd go back now we'd have to find something else to do for the rest of the afternoon. We had already checked out of the hotel and I wasn't eager to get off the mountain so early. I also argued that when we get down I would walk the additional mile along the road to get the car. Eventually I managed to convince everyone and we continued on up the mountain.
There were fewer trees now along the trail, and each of them had a distinct shape, giving it an interesting character. 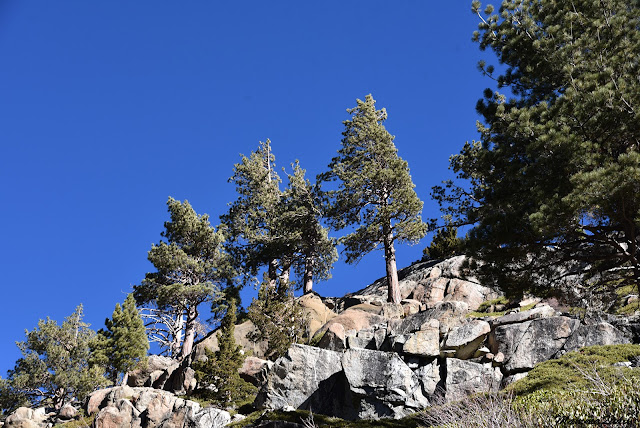 We passed big slabs of granite where very few trees were growing and those who did were stunted. At the top of one of these slabs I saw a large rock balanced on the brink. Apparently Sisyphus was on a coffee break. 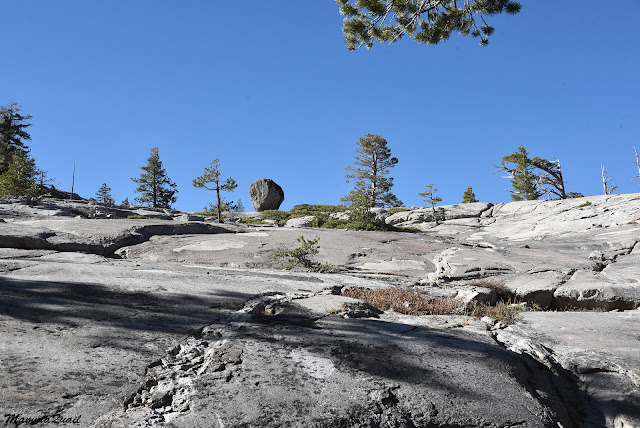 We made it to the pass and the intersection with the Bayview Trail and sat down for another break. It was early afternoon and but the days were short. A group of hikers came up Bayview and stood for a while at the intersection debating among themselves whether to go down immediately or to continue to Velma Lake which was about three miles north of us. I offered to take a group photo of them and they gladly accepted my offer. Then they decided to go to Velma Lake and disappeared from our view.
We finished our break and headed up Bayview Trail. The trail was still going up but the grade was much milder. The trees were further apart and we enjoyed the sunlight and its mild warmness.
Birds kept calling each other from the trees. Pappa Quail and the elder chika followed the calls and found a pretty Steller's jay.
We passed the highest point of our hike. Right after that a narrow path split off the main trail, leading up to summit the peak of the mountain we were on. Half jokingly I suggested we'd summit it. Noe of my family found it amusing. I shrugged and we moved on.
A sharp turn to the right and we found ourselves on a very steep downhill trail. To the east it was a very long drop. The younger chika squeezed herself to the mountain side of the trail but I looked admiringly at the view below. I could see Rte 89 winding way down there, and behind it the vast, blue Lake Tahoe. Lakeview Trail was named correctly.
Down, down, down. The way down seemed endless at times, but each time I looked down Tahoe seemed a bit closer.
We descended at a fast pace but the sun was descending faster yet. Before long deep shadows started covering the east-facing slope we were on. In the shade again, and not straining as much as we were going up we felt cold once again. 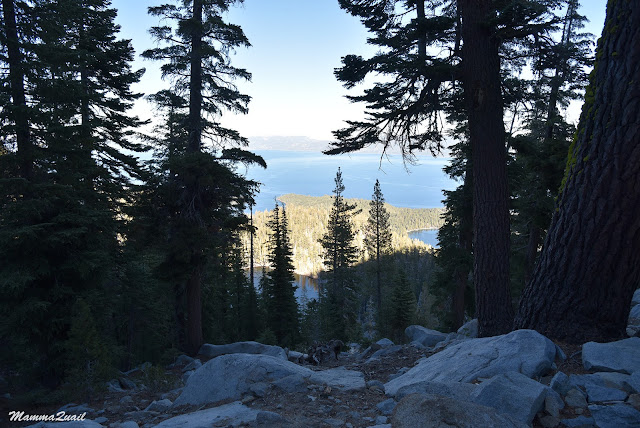 Most of our descend was through a thick conifer forest. Every now and then, however, the trees opened up to slow us a good view of Lake Tahoe below. We stopped for a short breather at a wide vista point to admire the view. below us we could see not only Lake Tahoe but also Emerald Bay where we hiked the day before.
Almost all the way down we passed Granite Lake. Pappa Quail and the chikas didn't feel like going down to its shore so they waited for me on the main trail while I went down to the lake to take a closer look.
My photos of that lake were the last good shots I took. After we passed Granite Lake daylight was waning quickly. We made it all the way down to Bayview Campground where I left Pappa Quail and the chikas and went north on Rte 89 to Eagle Falls parking lot to get the family car. By the time I was back to pick up my family (they had made it across the road to the picnic area while waiting for me) it was nearly dark. It was time to drive home.
It was a good day - we had a long and beautiful hike as a place we never really explored before. As we were leaving town I was talking about wanting to go backpacking at the Desolation Wilderness. Pappa Quail was silent and the chikas asked when and where we would stop for dinner.
Not much later we cruised past Placerville and almost immediately were engulfed in the dirty, smoky  air. It took nearly two more weeks before the rains finally came, the fires were quenched and the air was breathable once more. By then it was already Thanksgiving time and we were well on our Thanksgiving vacation down in Southern California.