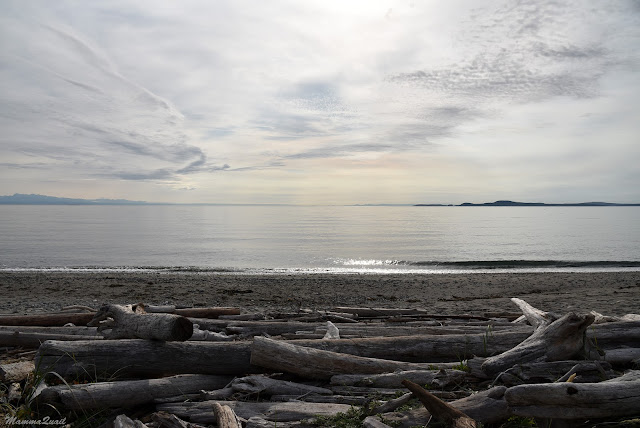 Today we're in the middle of spring break, which means that the chikas (and their parents) have some time off doing online schoolwork while sheltering in place. Our original plan for this week was a trip to the Gulf of Mexico to see the migratory birds there. That plan was cancelled and now I have ample time to look through photos of previous family vacations.
The last vacation we had outside of California was last July - to northern Washington. I posted here already about the first really awesome hike we had up and down Sauk Mountain on the third day of our trip there. Now I go back to the day we arrived at Washington and the little hike we had at the remaining daytime after the flight and the long drive from Tacoma airport to Burlington, where we stayed that night.
Before we left home Pappa Quail did his homework on good birding places in the area, and he directed us to Deception Pass State Park which is coastal.
After getting over our mild shock of how much cheaper an annual state parks pass is in Washington, compared with California, we drove down to the main parking area and looked around.
I didn't have to look far for the first wildflower - gum weeds bloomed right behind the log that marked the edge of the parking spot.
The air was cool and the sky overcast. Despite that the beach was overflowing with people. It was the 4th of July after all, and it wasn't raining. I guess in Washington that counts as beach weather.
It was a challenge to get beach photos without any humans in the frame but I managed a few.
When looking southwest I could see a ridge of rugged, snow-capped mountains. I recognized them immediately - I was looking at Olympic National Park! I was there with my family 7 years ago and we had a fantastic time there. I felt the yearning pinch at my heart.
Meanwhile, there was some great excitement in the birding half of my family - they've spotted a rhinoceros auklet (named so for the horn-like protrusion above its bill). The bird was busy fishing and would dive in the water and come back up holding a fish or several fish at a time.
A seal was scouting the coastline as well, looking curiously at the people that packed the pebble shoreline.

After seeing what was there to see right by the parking lot we found the trailhead and started a short and sweat lollypop hike  down the coastline.
At first the trail was a wide gravel road, stretching fairly close to the beach. It was elevated just enough that, with the coastal vegetation, we could avoid seeing the beach goers sitting in their beach seats by the water.
I skipped with delight when I saw the next wildflower - a sand verbena. I knew it from California (although at that time I wasn't sure it was the same species) and seeing it so far north made me happy.
The beach sand there is black - an erosion product of the black volcanic rocks of the region. It is also very coarse, as it is geologically young.
The dunes along the coast at Deception Pass were fixed with vegetation/ Much of this vegetation was the grass in the photo below, reaching as high as my chest.
Another plant that was common there, although it was blooming very little at the time of our visit, was the beach morning glory. A beautiful vine plant that covered large areas with its heart-shaped leaves.
We came upon a trail fork and begun the loop section of our hike, heading right into a forested area on a paved path. 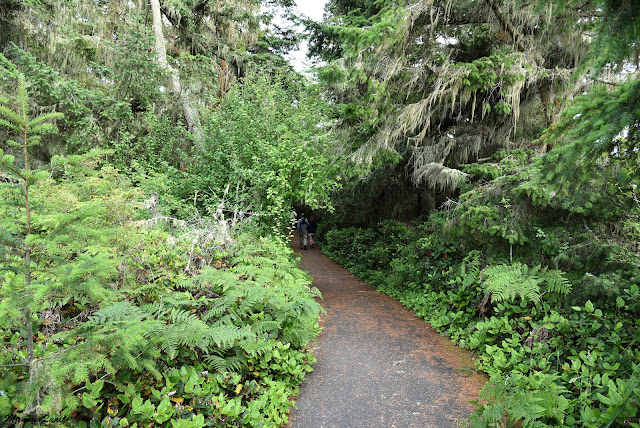 Most of the trees there were conifers and the tall bushes were lush and green, but only a few of them were blooming. Those that did however, were quite impressive.
Pappa Quail and the chikas walked ahead and I trailed behind them, stopping here and there to look at plants of spiders. When i caught up with them, they were looking at a cute little chipmunk that was munching on something, perched on a thin acer branch.
As we went on, I noticed one other bush that was blooming, and its blossom looked very much like a manzanita. It was of the same family, of course - a salal. On some portions of the trail the salal was the dominant plant flanking it.
A near the south corner of the loop we arrived at an observation deck with a view point to a marsh area. Naturally, we paused there to search for birds. 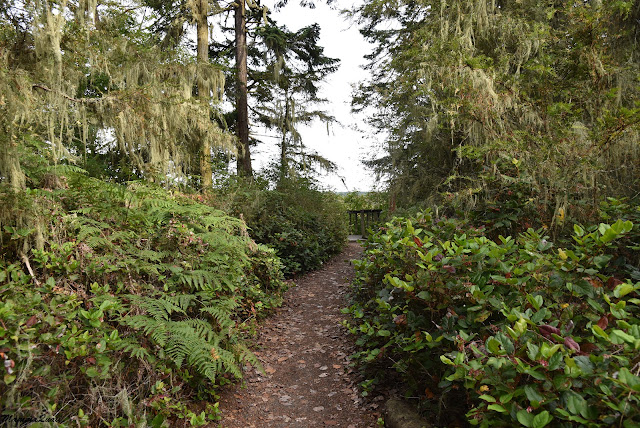 The map we had marked this field as a march but we couldn't see any open water. It might have been shallowly flooded - all we could see were plants. 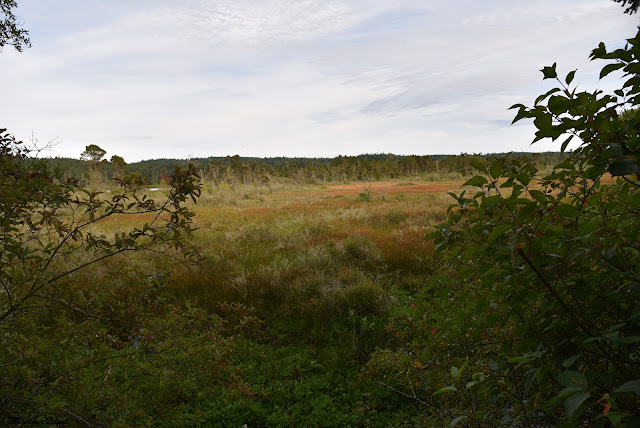 No water, so no water fowl. Pappa Quail and the elder chika were somewhat disappointed. They settled for a red-winged blackbird, a bird very common down in California as well.

I had other fascinations. There were many spiders along the trail, most of them seemed of one species, and all of them extremely hard to photograph for their size and relative lack of pigmentation. They had pretty-shaped webs (which were hopeless for me to get a good image of), and curious looking dark spheres that looked like eyes but I'm not positive that they are indeed eyes. For one thing, spiders have eight eyes, not two. Also not all individuals seemed to have these things. I wonder if these are sexual organs of sorts.
We turned the south corner of the loop and started back north. the trail brought us back near the seaside, so close that it was tempting to hop across the beach grass and driftwood and walk along the water line. We did that for a little bit but returned to the trail after a short distance. 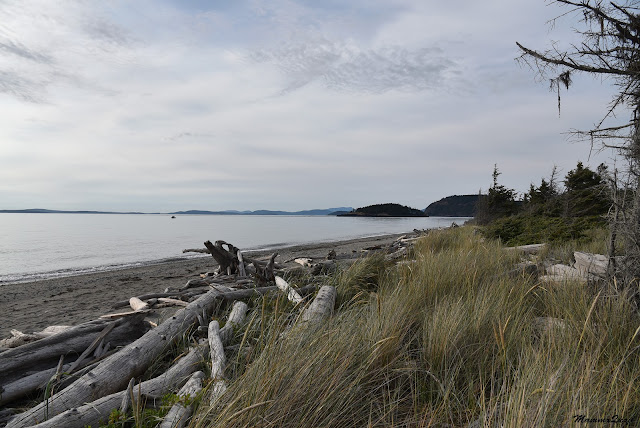 A familiar wildflower grew along the path - the common yarrow. It is so common that I hardly notice it anymore, but there weren't too many wildflowers there at the time so the yarrow got its place in this blog post.
More distant from the trail bloomed some pink flowers. They were too far for me to photograph so I recruited Pappa Quail for this job.
The wind picked up and we quickened our pace. There was no ran in the forecast for that day but I eyed suspiciously the clouds gathering above us. 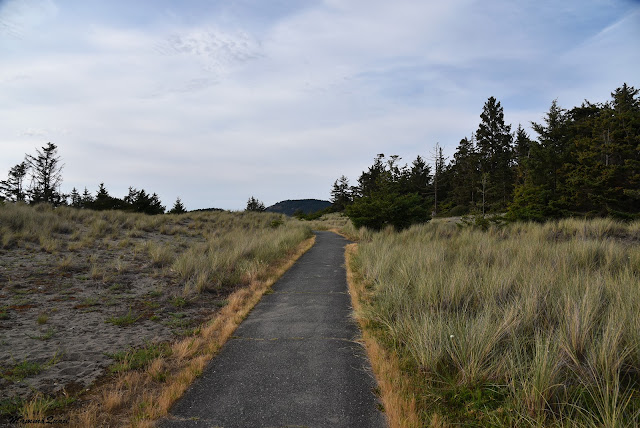 I forgot about the chill and the clouds when i spotted a strange looking plant ff the trail. What I was seeing, turns out, were the fruit of a parsley-related plant that was already past its bloom time. This one grows in California too but I've never seen it there.
Further up the trail we came upon another interesting dune plant. Unlike the Glehnia, this one was at peak bloom, and there were many of them.
We completed the loop portion of the trail and were back on the same trail we started on. Without any verbal discussion we all went directly to the shore and stayed there for some time. Pappa Quail and the elder chika immediately begun searching the water for the auklet and other sea birds while the young chika looked for pretty pebbles and driftwood to carve. 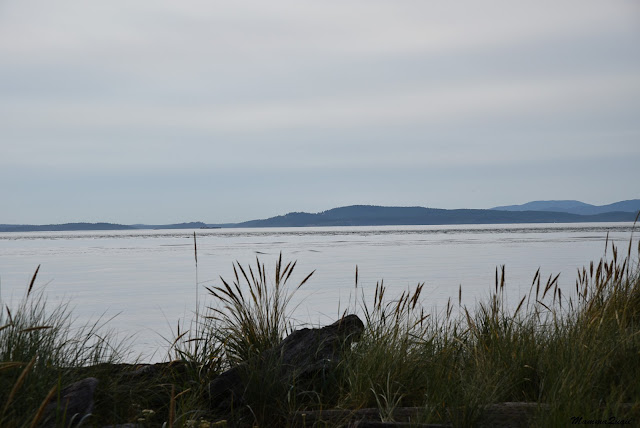 Eventually though, we got back on the trail and headed back to the parking lot, walking through patches of ambrosia and fields of beach grass.
Just before reaching the end a rabbit hopped out of the grass, lingering out in full view long enough for a photo. It turned out that this was an eastern cottontail. What was it doing all the way west, who knows?
This short and sweet hike was the perfect opening of what turned out to be an amazing vacation for us. We tried to hike another trail at Deception Pass but it was already too late in the day and evening was falling fast. It was time to call it a day.


Many thanks to members of the Washington Native Plants Society for their help in identifying plants!
Many thanks to Pappa Quail who identified animals!