An Afternoon Easy Flow at the Rasar State Park

It was nearly 5 pm when we arrived at Rasar State Park so we didn't have time for a long hike. Most of that day we passed looking for information at the Sedro-Woolly NPS visitor center and hiking the Baker Lake trail. Rasar State Park was not one of the places named for us at the visitor center but Pappa Quail had it on his list of where to go birding, so were we went.
From the parking lot we took off directly toward the river, brushing against ferns and shrubs that flanked the narrow trail. It was nice to hike without worrying about poison oak but the brambles did give me a scratch or two. 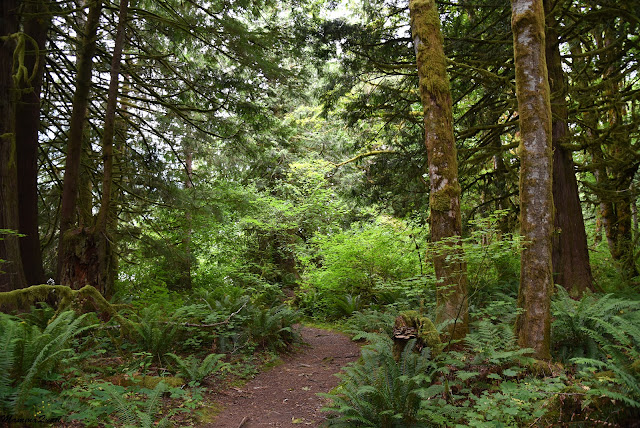 Rich, earthy smell permeated the forest air. The smell of of a damp, living rain forest. A good, healthy fragrance.
Soon we were by the Skagit River, gazing at the wide strip of dark green water flowing westward. We joined the river trail and took it first to the east, looking for a good place to get down to the water.
The river bank was of large, dark pebbles, very uncomfortable to walk on. The broad-leaved trees were growing almost at the waterline and their boughs were bent down to the water, as if testing the speed of flow (quite fast, actually).
Unhindered by the speedy pace of the Skagit River - a small group of common merganser floating almost effortlessly near the river bank.
A layer of clouds hanging so low that it blocked the view of the nearby mountain peaks, darkened the afternoon sky. The forecast didn't predict any rain for today but that didn't stop me from glancing warily at the sky every now and then.
Pappa Quail and the elder chika were busy looking for birds and sure enough they found some. A spotted sandpiper was poking its beak between the pebbles. We see this bird in the Bay Area without the spots on its belly, which are its breeding plumage.
A small song sparrow was taking a bath in a little inlet pool away from the fast current. It was a song sparrow - a bird of a species very familiar for us in the Bay Area, but in a darker, Pacific Northwest form.
The east spur of the River Trail terminates in a dead-end so we turned around, backtracking at first, then passing the fork where we had joined it and continuing on westward.
The west going River Trail had a surprise in store. Looking down under the brambles and ferns I saw a ghostly looking plant - the eerily beautiful Indian pipe. This plant blooms very sporadically and not every year. I was lucky to find it there.
Little mushroom gardens also bloomed at ground level, adding their colors and odors to the forest floor. I was hoping to see a bigger display of mushroom in an area known for its near-perpetual rain, but I was happy with what was there. 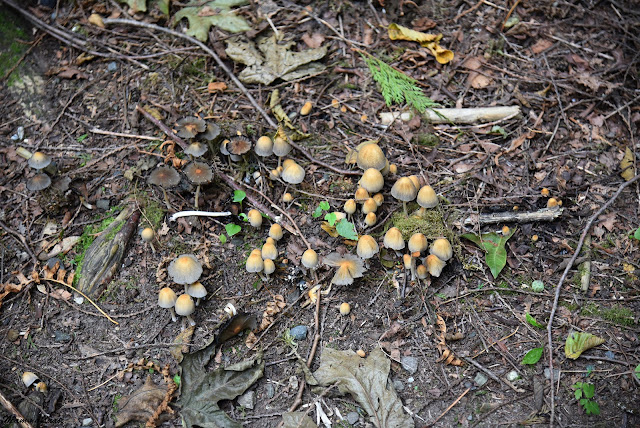 The little birds that tweeted in the vegetation were not visible. We looked fr another place where we could get down to the river. Meanwhile I settled for the little wildflowers that dotted the trailside.
The next place were we found water access was more like a recreational beach, only without any people. the river bank was sandy and easy to walk on and I assume that on nice weekend this place is probably full with visitors. We, however, had the beach entirely to ourselves.
The chikas found a fallen tree with its ace still attached firmly enough to the ground. Bouncing n this log gave them pleasure to n end :-)
While the girls were busy entertaining themselves with the bouncy tree Pappa Quail was looking for birds. He found a cedar waxwing but the lighting was such that only the silhouette was obtained.
I was more intrigued by the swirls of cloud sweeping across the ridge north of the river. They looked almost alive, like dancing winter sprites. 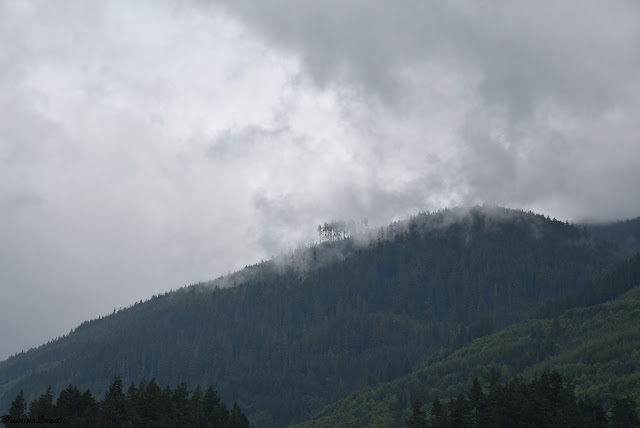 We got back on the trail and continued west, making our way between berry hedges. Most of them were still in the blooming phase but there were quite a few that were already bearing ripe fruit. Needless to say, we all indulged in this nature's treat. 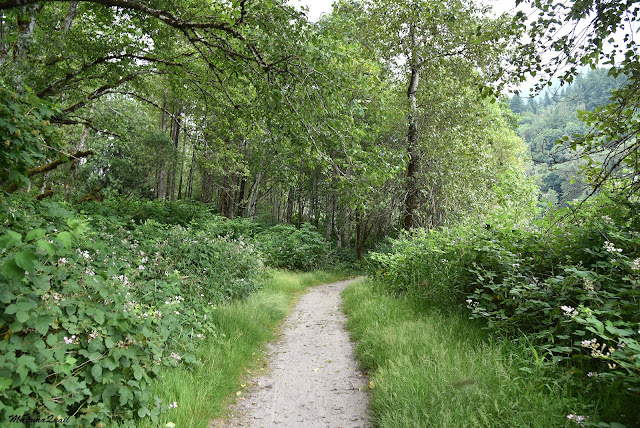 I followed the bumblebees as they flew from flower to flower, doing their share in ensuring the next round of yield. The bee escaped my photo frame but the blossom turned out nice.
Another blooming shrub I saw along the trail was a nite shade with a hue that I wasn't familiar with. It turned out to be the bittersweet nightshade- and old world invader, and a highly toxic one.
We arrived the western end of the river trail where it curves around to go back inland. Before turning that corner however, we found a bench and sat down for a short break. 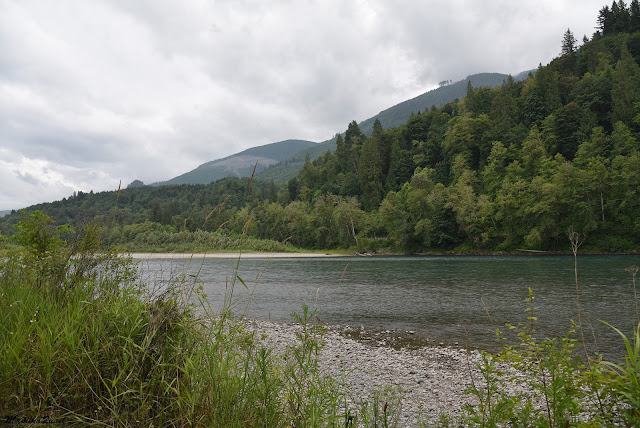 The immediate vegetation there was a large patch of a vetch-like plant that was unfamiliar to me. It's bloom was really nice. It turned out to be yet another invasive species though.
In California it's fairly easy for me to tell if a certain plant is native or not. Mostly so because a lot of the invasive species are from the mediterranean region. In Washington however, I'm unfamiliar with much of the plant community, so bothy native and non-native plants are unfamiliar to me. One interesting blackberry that was thriving along that trail turned out to be non-native as well.
But the fireweed I recognized, already knowing it from California.
Pappa Quail and the chikas pulled some snacks from he backpack. Seeing that this break will take somewhat longer, I stepped down to the river. On my way down I saw some nice gilia-like flowers blooming between the sand and the pebbles.
This beach was much wider, and I imagine that on nice days it is also more populated. As it was, I was the only person walking there at the time.
I rejoined my family and we continued north east through a patchy forest of trees I didn't recognize. Patches of yarrow and crownvetch decorated the trailside and little bush birds tweeted at us, hidden in the vegetation. 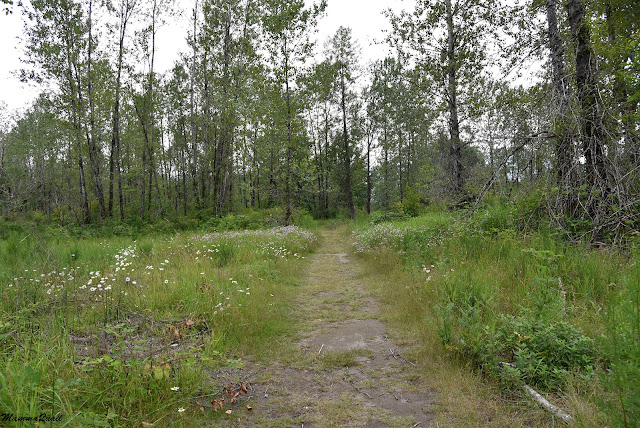 A few pink thistles bloomed in the forest clearings. I like seeing them, and the insect feast that can often be seen on these inflorescences. I didn't see any pollination activity at the time though. Perhaps it was too cold and dark. Perhaps the bugs were done for that day, it was already getting late.
The trail left the forest and we were crossing a wide and beautiful meadow. The yellowing grass field was dotted with blooming yarrow and fluffy seedheads of asters.
Interesting-looking reddish patches in the field attracted my attention so when I saw one right by the trail I came near to check it out. 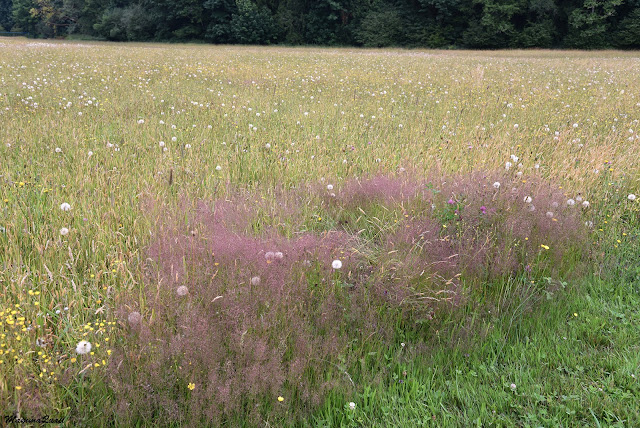 I looked up and stood still. The peak north of Rasar State Park appeared to be smoking. I knew it was just the whips of cloud but the effect was really impressive and somewhat scary.
Rasar is a small state park with a relatively small trail system. We hiked the outside loop including the north dead-end spur of the river trail in a fairly short time, including the breaks by the water. There are some inside trails that we skipped but these too are short.
In short - on the other side of the field we were back again in the forest completing the loop to the parking lot.
Just as the cars became visible through the trees the chikas called me to look at what they had found on the ground - a snail in motion. It was darker than the snails we see in the Bay Area. It looked more like a snail I saw at Myrtle Creek, near the Jedediah Smith Redwoods. I don't know what species it is. 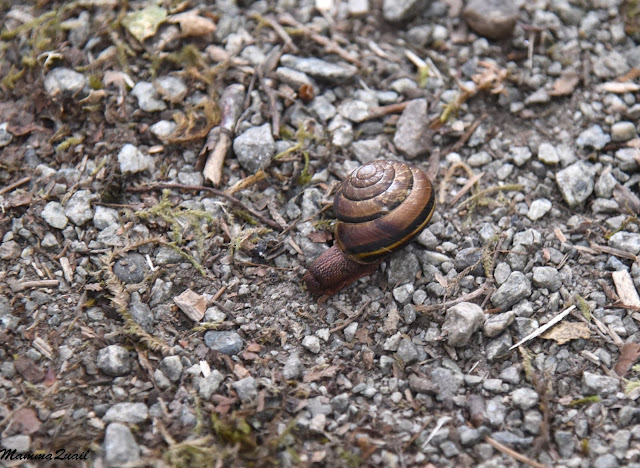 The hike ar Rasar State Park wasn't a highlight in terms of flora and fauna seen, but it was a lovely hike in a very beautiful setting, along avery impressive river, and it was very fruitful berry-wise.
All and all it was a good day, but I felt lacking. I wanted to see something spectacular. Something worth having travelled all the way to Northern Washington.
I received just that on the following day, at the Sauk Mountain hike.