Forest Trail #610 and the Invisible Mountain

It was my idea to travel to Northern Washington last summer. I wanted to see the North Cascade National Park and I convinced Pappa Quail that it would make a great destination because the weather there would be cool and the area is far enough north to see birds that he hasn't seen yet. Other than deciding on our general destination, I did very little else in terms of planning. Pappa Quail extended the planning somewhat and even arranged for our first 4 nights. It was his idea to go on the previous day to Deception Pass State Park.
Our second day in Washington however, started with the default plan - going to the nearest NPS visitor center (which was in Sedro-Woolly) and asking for recommendations of hiking trails along the lines of our fancy. Armed with this fresh information we printed our rental car east along the Skagit River, then north to Baker Lake.
We drove first to the treailhead of Baker Lake Trail #610. There was no view of the lake itself from there, just a narrow trail that disappeared into a thick forest.
The forests in West Washington are temperate rain forests and the abundant moisture was apparent all around. Coming from an arid state like California it felt like diving into a whole different world.

The forest undergrowth was thick with ferns, shurbs, and tree remains covered with moss. Some looked very pretty and ornate, like little, sophisticated gardens. 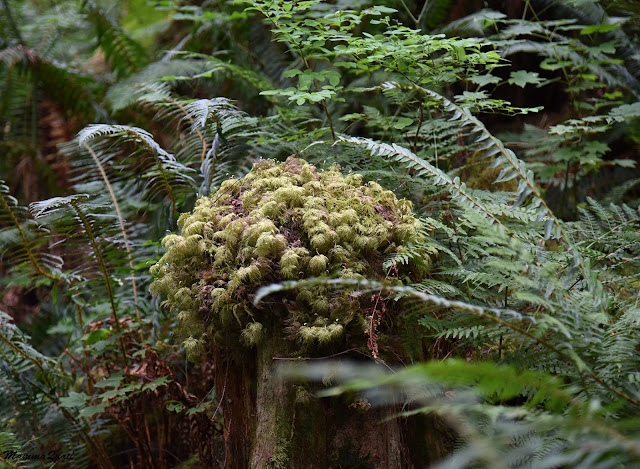 The sky was overcast. Not that we saw much of it through the canopy, but the forest was dimmer than it would be had the sun come through. In a way that made photographing easier because the lighting was also more uniform.
Soon there was plenty to photograph: little forest flowers were plentiful along the trail, although not in a great variety of species and colors.
Many of these flowers I was already familiar with from California. They were very nice but I was hoping to see new things.
What was most certainly fresh for me to see was the lushness of this rain forest. It was great to see a place where plant growth isn't limited by water availability. 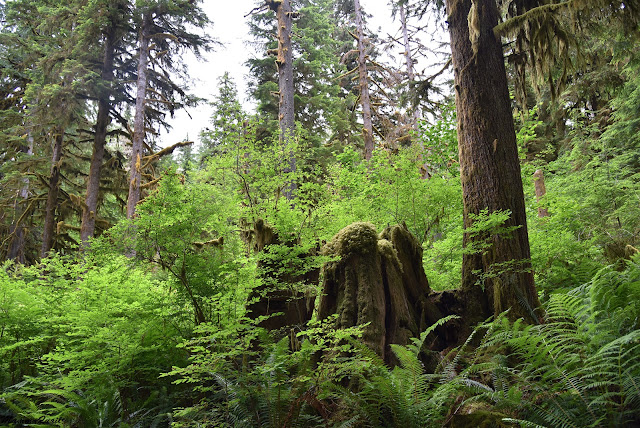 The elder chika soon found an LBB -  a little brown bird. By the time I caught up with her it was gone.
I was walking in a sea of green. Then suddenly I saw it - a berry! A single berry, and not a ripe one either. Later on this trip however, I'd see many ripe berries and sometimes I'd even get to eat one or two, those that my chikas had missed after grazing the trail ahead of me.
Here and there we run into little creeks crossing the trail. None were too wide to cross with a single hop. 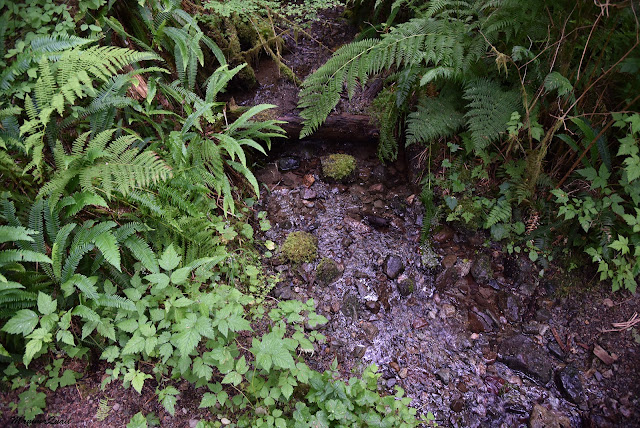 The chikas found a big slug and called me. I guess it's the Washington version of the banana slug. Big, but not the pretty yellow slugs we see in the Bay Area. Still pretty impressive.
The next berries I found were rive and delicious. Luckily there weren't too many of them otherwise we would have been stuck there still.
The trail neared the ;lake enough for us to get glimpses of the water through narrow gaps of vegetation. We were pretty high above the water and it didn't look like there was any easy access to the shore line. 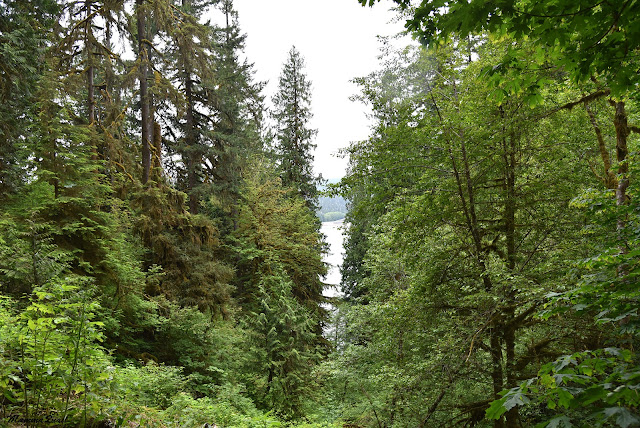 The trail undulated up and down through the forest, without much change in the scenery. I was happy with the plant life and the flowers I saw but the burgers in my family started grumbling about the bush birds that would tweet but won't show themselves.
Somewhat ahead there was a mark of a creek crossing on the map that looked close enough to the lake. We decided to take a break there and make it our turn around pint. The trail itself goes on for about 14 miles along the eastern shore of the lake and knowing we won't be walking all that it didn't matter much where we would decide to turn back.

Charmed by the dense rain forest I could have walked on and on. I hoped to see unfamiliar wildflowers but still much of what I see I already knew from m hikes in California.
Deep ravines lined the hillside we were walking along. The trail was fairly level, crossing these ravines  on narrow foot bridges. From the bridge I would look down into the depth of the gulch to the trickle of water and the fern garden flanking it. 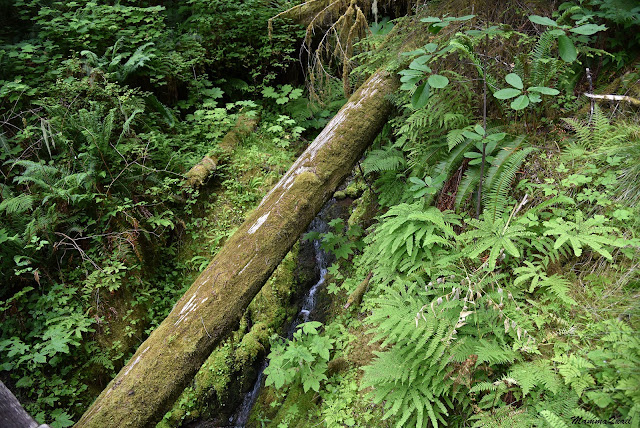 Eager to get to the turning point the chikas and Pappa Quail hurried down the trail leaving me to trail behind and capture the little forest marvels.
When I finally caught up with my family they were all focusing on one Douglas squirrel that was busy with a nut on one of the tree branches. When I arrived the squirrel decided it had too much audience and darted off down the tree trunk.
The trail took a dip and I could see the lake between the trees getting closer and closer.
Eventually we arrived to a large creek that was flowing into the lake not far from the trail. A larger bridge crossed the creek and we crossed on but then stepped off and sat down t snack and rest by the water. 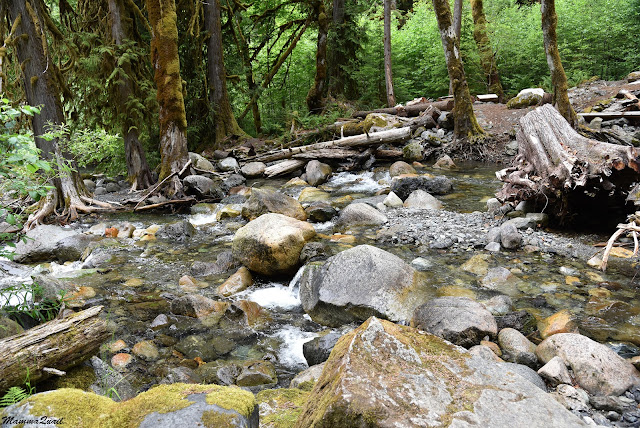 From where we stopped there was access to the lake but it wasn't very easy to get there - we had to scramble across large broken boulders covered with slippery moss. There was no obvious shore to sit on.
At first only me and the chikas went down to the water but then the elder chika made a sighting that got Pappa Quail down to join us there - an eagle!
Another bird was hopping to and fro near the creek. A very common bird, but colorful and lovely. The American robin.
At the bridge there was an open view up slope to the healthy-looking, vigorous forest. That bridge was also our turning place. When we finished our break we started up the trail where we came from. 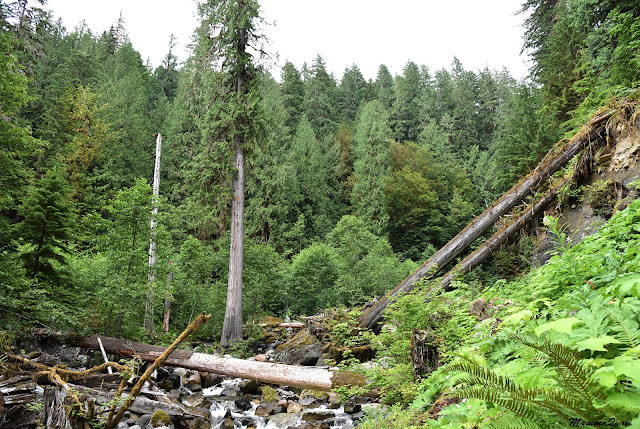 The way back was fairly quick and other than one exciting encounter with a very colorful garter snake we didn't really stop for any significant time.
The rest of the hike was eventless. That doesn't mean I didn't pause briefly here and there to examine the vegetation more closely.
After each such pause I had to quicken my pace to a near run to catch up with the rest of my family. Clearly they were ready to move on to the next thing. 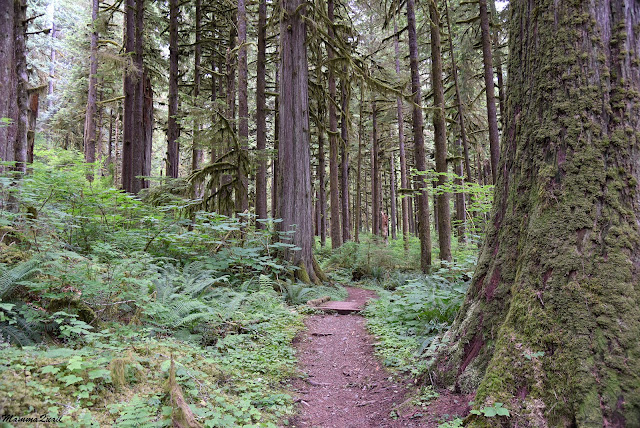 Before leaving the area all together we stopped at the Baker Lake boat launch. Each of us had a different reason to be there: the younger chika wanted to play by the water, Pappa Quail and the elder chika thought there would be a better chance to see birds on the lake.
And they were right. Somewhat. There were birds on the water, but only common Canada geese, some of them juvenile.

I wanted to see Mount Baker, the most northern of the Cascade volcanoes within the US. It surprised me to find out that this mountain wasn't part of the North Cascades National Park. and that the mountains that were inside the park's area were not true volcanoes.
To my chagrin Mount Baker was nearly completely shrouded in clouds.Only a few spots of snow-white flashed occasionally through the moving clouds.
I consoled myself looking at the pretty daisies that bloomed near the water.
There was nothing more to do there that day, so we drove off to our next on the recommended hike list - the Rasar State Park.
Pappa Quail registered my disappointment. He didn't say anything at the time, but three days later, while driving back west on a lovely afternoon after an amazing hike at the Cascade Pass, he suggested dropping by at Baker Lake to look upon Mount Baker. We did and I got my satisfaction. The photo of this majestic volcano is at the top of this blog post.