North of the famous Yosemite Valley there is another one - a valley deep in the Sierra Nevada mountain range, carved in the granite by the ice age glaciers. A hundred years ago it also looked like the Yosemite Valley: deep and rich with vegetation, with waterfalls pouring down the cliffs and collecting into the Tuolumne river, running on the valley floor.
This is not how it looks today. On 1913 the long time battle, led by John Muir,  to save the valley was lost. The congress passed a decision to build the O'Shaughnessy Dam.

The dam was competed on 1923. This is how Hetch Hetchy Valley looks today*. It is how it looked five years ago when we went hiking there.

Hetch Hetchy Valley is not on the route of our usual Yosemite visits. We took the opportunity of our camping trip to Cherry Lake and so, after breaking camp after the second night, we drove south to the flooded valley.
Hetch Hetchy is only a short day's hike from Lake Eleanor, but it was not for us with the little chikas in tow. So we opted for the longer and quicker way of driving there. I must admit that the sight of the huge lake locked behind that deep dam is quite impressive:

We parked on the south side of the dam and looked around. To get to the north shore trail we had to cross the dam. To the west - it's really a long way down.

North of the dam the trail goes through a tunnel curved in the hard rock. A violet green swallow was nesting there and we caught sight of the yellow-lipped fledgeling peeking outside. 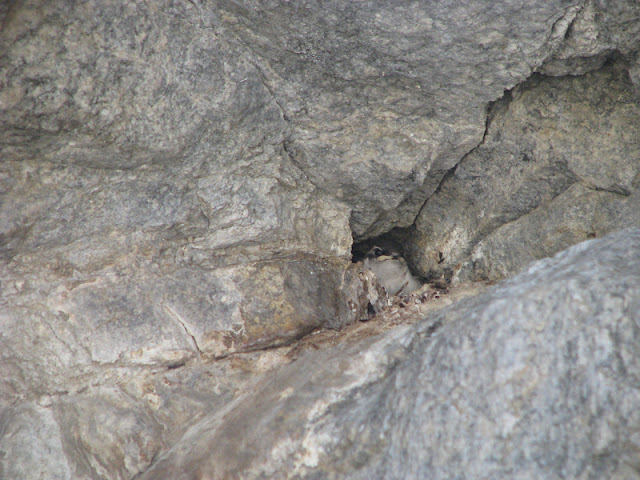 Early July is springtime in the high Sierra Nevada, and everything was blooming around us.


Although there were many colorful flowers everywhere, those who got most of my attention were the local orchids, which were quite modest in appearance.


Our original plan was to hike only to Tueeulala Falls, about a mile and a half east of the dam, but when we got there we saw that it was running but a trickle. So we crossed the little stream and continued onward, me carrying the younger chika, and the older one, who was only four years old, walking hand in hand with Papa Quail.

We could see the Wapama Falls ahead and made our way over there.

Unlike Tueeulala, the Wapama Falls were gashing with water. The trail goes on a board bridge over the stream and we were abundantly wetted by the spray. Like other falls in the Yosemite Valley, this one is just as spectacular.


Wapama Falls is nearly three miles east of the dam and we definitely pushed the chikas ability walking all the way there. Papa Quail carried the older chika on his shoulders part of the way back.


We didn't encounter any major wildlife on this hike. Some birds, and this pretty lizard who stayed put long enough to be photographed: 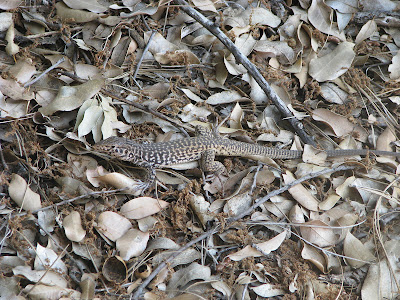 Our hike, in and out:


We arrived back at the parking lot exhausted. This nearly 6 miles long hike was the longest we did with the chikas up to that time. The little one, who was under two, had to be carried (by me) practically all the way. The older one did most of the walk on her own young feet. On her next major hike she would ascend Cinder Cone all by herself!

There is a movement calling to demolish O'Shaughnessy Dam and restore Hetch Hetchy Valley to its natural state. The dam was built through a congress vote, is owned by the residents of San Francisco County and is built and operated on Federal grounds. It is part of a water system that supplied a major part of the Bay Area, myself included, with fresh water. A measure was put forth in the last elections, called for an 8 million dollar proposal to study alternative water supply to San Francisco, should a decision will be made to demolish the dam. That measure fell by a majority of 77%. People in San Francisco are just not ready to think of alternatives yet. It is easy to continue with what already exists.

This year is the 100 anniversary of that congress decision to dam Hetch Hetchy - the Raker act.  I don't know if it is possible to restore the valley to its natural state, and maybe there is no going back from here. It is, however, a striking evidence to the scale of the change that can happen in nature with a single voting stroke, to alter forever one of Nature's treasures in order to provide resource for people in a far removed place.
Here is a link to a Los Angeles Times news article discussing the measure's failure.
Here is a link to a Sierra Club web page with early 1900 photos of Hetch Hetchy Valley, before the dam was built.

And here's one last look on nowadays Hetch Hetchy, a view east taken on the trail:

*August 30, 2013 update: The southeast side of Hetch Hetchy now burnt by a the huge rim fire that consumed over 180,000 acres of forest at the northeast part of Yosemite.