On a different angle - To Mission Peak from Ohlone College

Mission peak is right there, so close to my home. It is only natural that I would ascend it as often as my time allows. I already posted here about my first conquest of the Peak, ascending from Stanford Avenue staging area. This time I took a different trail - the one that begins at Ohlone College. This trail is a bit shorter - less than 6 miles round trip - and is not as steep, but still gives a good work out and, what's more important, a different scenery on the way to the top. 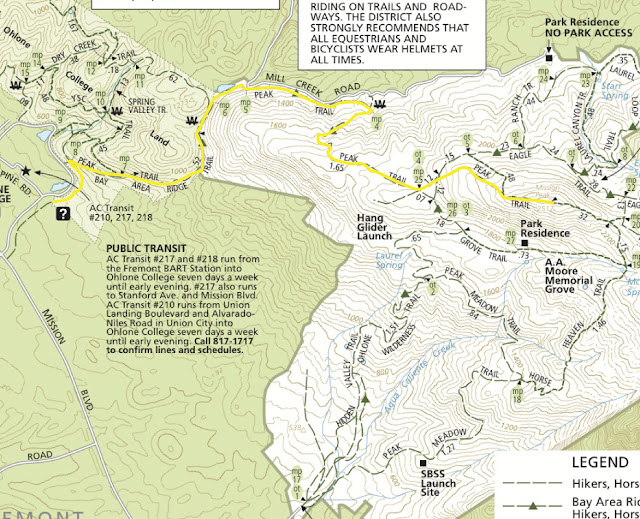 It was a very foggy morning. So foggy, that I found myself wondering about the necessity of my having brought the camera along. To justify the weight of the camera, I looked for near subjects to photograph.
I am fond of spiders. I find them interesting and beautiful. Also, they are on my side when it comes to dealing with mosquitos and other annoying bugs.
It was less than a week after the first serious rain of the season. Nature's response was quick to sprout:


At the time of my hike, the spouts were barely visible beneath the dry grass. By now, of course, the hills are green with new growth.
The trail soon entered a groove between tall hills, where the sun was just beginning to send it's rays over the skyline.
I watched the patch of light slowly descending on the hill to my north, where it was diffused by the fog. Although illuminated, I could barely make out the hill top. 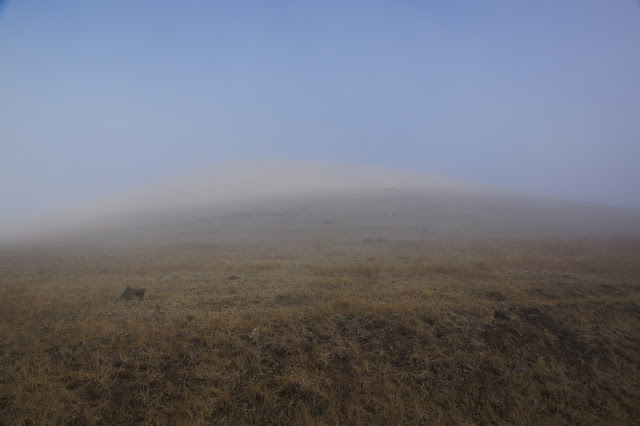 The hill to my east looked even more eerie. It felt almost like walking into one of these Halloween movie scenes. 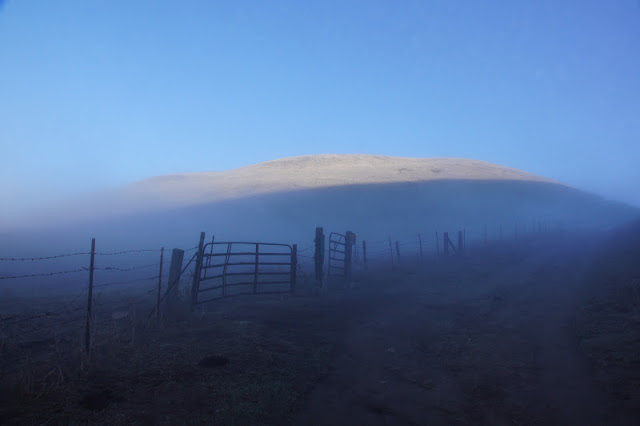 About half a mile later the wide gravel road merged with a paved road and the Peak trail turned right and up along the road and into some woods. When I emerged on the other side of the wooded area I found that I have left the fog behind me. 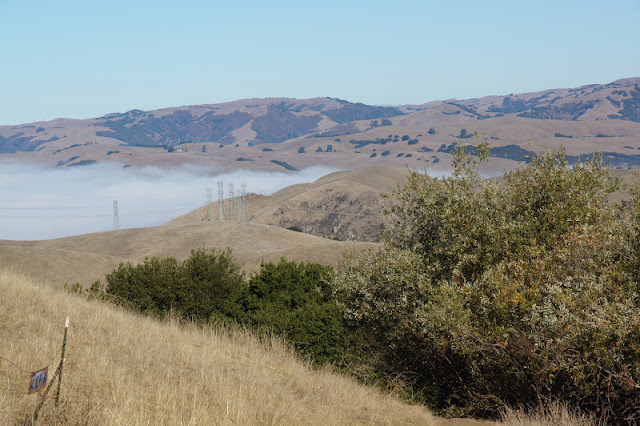 The bright, sunny day awaited me on the higher elevation. It was gorgeous and warm. With renewed energies I hurried uphill. The scenery along this trail is mostly of open grass land, managed by grazing to control the wild oats and other invasive grasses and so reduce fire danger. I did spot a deer there, but the largest most common mammal there is the Black Angus.
It was calf season, meaning there were many young calfs about. They are so cute, I really cannot imagine turning them into steaks. 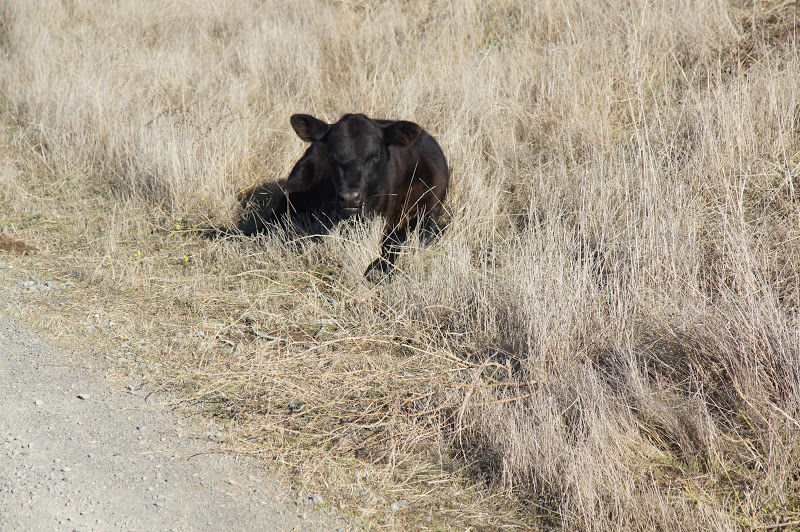 Their mammas were there too, of course. On a family hike a couple of years ago in Sunol Regional Wilderness we had encountered an aggressive mother cow that nearly charged us. Ever since I take more care when approaching cattle on the trails, making sure never to walk between a cow and her calf. That is not always easy, because often they stray from one another and are on opposite sides of the trail.
I passed peacefully near the cows and they didn't mind me.
Good.
I made it to the Peak's shoulder and looked to the west. Below me shined the golden grass on the slope of Mission Peak. The dark peninsula hills loomed darkly afar, underneath the bright blue sky.
In between ... the bay and its cities, east and west, were completely hidden under a thick white blanket of fog. It was there that I took the picture that heads this post. I then turned my back to the fog and continued ascending. Soon enough I met my friend the Horned Lark. So far, the high elevation of Mission Peak is the only place where I've seen this bird. But I see it every time I go up there. It is 100% reliable. 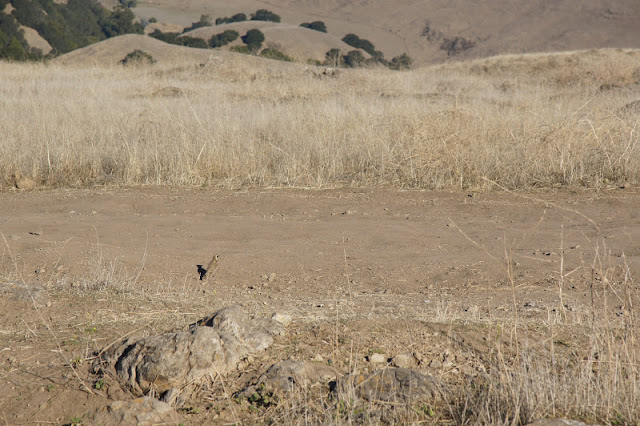 Birds were not the only winged beings there this time. Most ants are not winged, of course, but on this hike I came across a nest where the newly metamorphed royalty were going on their matrimonial flight, the only flight in their lives they'll ever take. After mating, the males die and the females loose their wings and dig up a hole where they lay their eggs and become queens of a new nest. 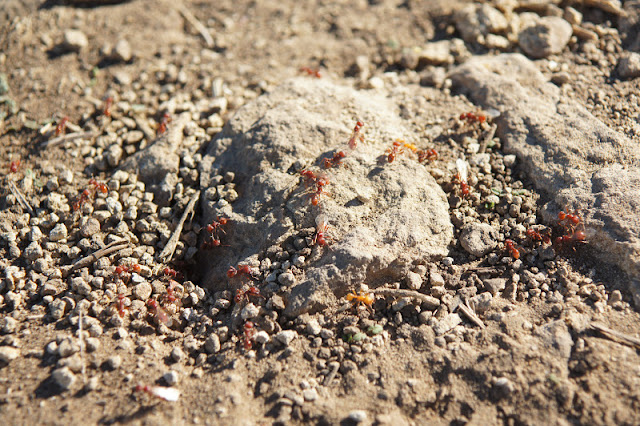 The last part of the ascend is the same one I did before. It is also the steepest part of the climb, and as always, I was both exhausted and elated when I reached the summit.
Below me it was still foggy. I could see a thin apparition of Fremont outskirts just at the bottom of the peak. That red-tailed hawk probably saw more than I.

I ate my lunch in leisure. By the time I was done and ready to go back down most of the fog had cleared. 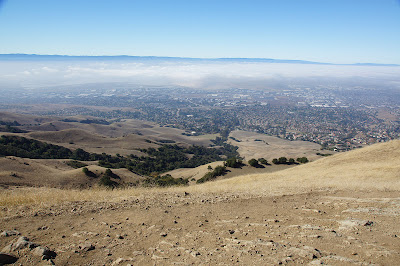 Going down was quick. I made only two short stops - one for a drink of water, and the other to photograph our state flower, a splash of color standing out in the sea of dry grass.


* One small note - on this hike I tested a pair of hiking poles. While offering only a mild support on the ascend, they did make a real difference going down. The trail is steep an the poles added significant stability to my gait. I made it down considerably faster than I would have without them.
Posted by Mamma Quail at 9:46 AM