For a long time I would stare at this region of the California map and dream. This time it was coming true. This past Memorial Day weekend we went hiking at the Trinity Alps.  Doing so, we also entered Trinity County, the last remaining California county in which we'd never before set foot.
This post is just a short one about our camping experience at the Trinity River campground, which was our base camp for the hikes we did in the area on that weekend.
Trinity Lake, is the northwest part of Shasta-Trinity lakes system. It is in the area of the Shasta-Trinity National Forest and it is a popular recreation area. Most resorts and campgrounds are right at the lake shores. Because I selected our destination only a week before, every campsite that could be reserved was already reserved. Our choice, therefore, was limited to the first come first serve campgrounds. I originally chose the Goldfield campground by the Coffee Creek Road, but when we arrived at the area on noon Saturday, Papa Quail suggested we try for the Trinity River campground.
The Trinity River feeds into Trinity Lake. The campground is a few miles north of the lake, right by Hwy 3. I was concerned about traffic noise but that was not a problem.
There was only one occupied site when we arrived and by the time it took us to build our tent they were already packing theirs. We had the campground to ourselves and we had the choice of the best site: right by the river.
The reason Papa Quail favored the Trinity River Campground was that at the Shasta-Trinity National Forest website it is said to have potable water (and as of writing these words, this information is still not updated). It was only after we pitched our tent that we discovered that the water has been disconnected a couple of weeks before our arrival. We had, however, our 7 gallon container, which we filled with drinking water at the visitor center, and the Trinity River provided for all of our washing needs.
So we stayed.
Camping at Trinity River Campground was fantastic. On our first night there, there were only two other campers, both on the other end of the campground. On our second night, we were completely alone. There was no traffic at all during the night. No sounds of talking, singing, fighting or RV generators. The only noise was the the river water, running along. A very soothing sound.
There were no lights. The moon was almost full, but a thick cloud cover darkened it. There were no other campfires, no electric lights on all night at the toilets, no vehicle headlights passing randomly along the tent. The moment I quenched the last embers of the campfire and switched off the flashlight I was surrounded with blissful darkness.
And it was not nearly as cold as the weather forecast had said. At least, it didn't feel like it.
It was my best camping sleep in a very long time. Just as wilderness should be. 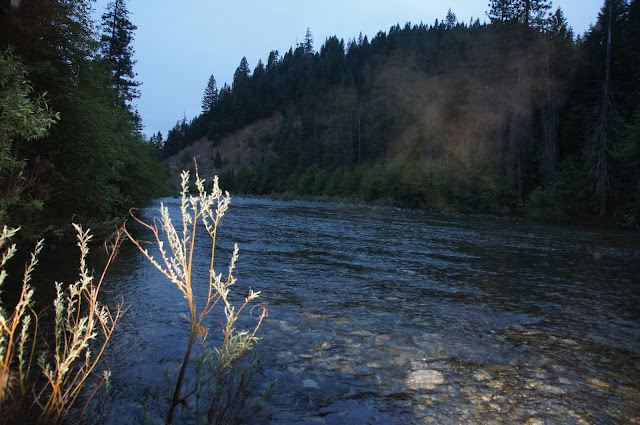 We on the Saturday of our arrival we hiked to Boulder Lakes and on Sunday we hiked along the south fork of the Salmon River. I wanted to hike some more on Monday morning but it was raining enough to discourage the rest of the family from any additional hiking in the area. So we broke camp and drove out, stopping only for a quick visit at Crystal Falls by Whiskeytown and a lovely birding walk at the Sacramento NWR. These hike stories will soon be posted separately.
I won't recommend this campground to anyone because I want it all to myself next time ....