It being so soon after a long winter vacation, we didn't plan any big trip for the Martin Luther King's Day weekend. A one day hike was enough for us. I have planned to take my family to Angel Island so we packed up food and water for the whole day and we arrived on time to the Oakland ferry just to discover that it doesn't run to Angel Island until spring.
We stood at the depot with our full backpacks and wondered where to go next.
I was recently reminded of cedar waxwings and I recalled that the first time I ever saw these beautiful birds was at Bothe-Napa State Park, on a persimmon tree right by the visitor center. I immediately suggested that we go there.
It's been a few years since we've been there last. The chikas were very young and we didn't walk much. Now we had the opportunity to do a proper hike there.
The park is a bout 6 miles south of Calistoga on Hy 29 and it took us about an hour to drive there from Oakland. When we got there we found no attendant at the gate, a closed visitor center, and no brochures of maps available. Having gone there on an impulse we did not have the map with us and I wondered how far out we should go without one. Then I spotted a ranger coming to empty the self-registration stand and I approached him, asking for the park's brochure. He handed me a flyer with the map of the campground and the marking of the trailheads, which did not satisfy me. I kept asking questions about different trails and eventually he pulled his one copy of the park brochure with a detailed trail map from his vehicle and gave it to me.
As it turned out, The map was very useful (if the ranger happens to read this, thank you!), and not only for us. All along our hike we run into people who weren't sure where to go next. Based on this I'd say that people who plan to go hiking at Bothe-Napa Valley State Park (or at any other California State Park, I guess) would be prudent to download and print the brochure map before going.

The Ritchey Creek, along which we hiked most of the time, originates at a spring and has a year-round flow. It was nice to see running water in January of the worse drought year California is experiencing in many years.
Although it was already late morning, it was quite cold when we started on the trail. We had planned to be under full sunlight in Angel Island and were not prepared for the deep chill of the shady woods. All of us were huddled in our light sweaters and I hugged my chikas on both my sides and urged them to walk quicker. Eventually we run into a small, but effective ascend that had warmed us up enough.
Occasionally too, the sun rays broke through the canopy and lit up patches of the forest. At that point I got warm enough to pull my hands out of my sleeves and turn on my camera. As always: the pretty bark of a madrone tree made the perfect photo subject.
The park prides itself on the redwood trees. Although we did not see any giants, even the younger, slimmer redwoods are impressive.
We went on along the creek going up at a gentle slope. We originally took the Redwoods Trail, which goes along the southern bank of the creek, but all the time we had in view the wider Ritchey Canyon Trail that went parallel to us along the northern bank.
At some point the elder chika announced that she saw a cat on that trail, across the creek. I lifted my binoculars to my eyes and couldn't believe our luck: for the second time in two months I was looking at a bobcat. And this one, too, was nonchalant. Walking to and fro, aware of our presence but not caring all that much. Not enough to run away, anyways.
Papa Quail was busy photographing the cat with every move it made. Eventually it started trotting down the trail in the opposite direction of our hike. Papa Quail followed along on our side of the creek and when he got tired of photographing the cat's behind, he whistled.
And the cat turned its face to the camera :-)
That truly was the turning point of the hike. Suddenly the chill was forgotten and all the whines and complaints quelled. Giddy and excited we dashed along the trail, ready to meet the next surprise.
The Redwood Trail ands at the creek. We crossed on the rocks and met with the Ritchey Canyon trail. Then we had to decide weather to loop back to the car or go on forward. At that point I was really glad that I got the map from the ranger because without knowing where the trail was headed we would have certainly gone back at that point.
We went on uphill, joined by two other hikers who had no map and did not want to stray too far. Soon, the Ritchey Trail forks. We took left (straight, really) onto the wider Spring Trail, which crosses the creek on a small bridge, and continues uphill in steep slope. At the end of Spring Trail there's the actual spring, all fenced away. At that point the trail suddenly narrows and disappears between the trees. We followed the trail in a single file all the way uphill. At the meeting point with Ritchey Canyon Trail the forest becomes chaparral and the view opens up. 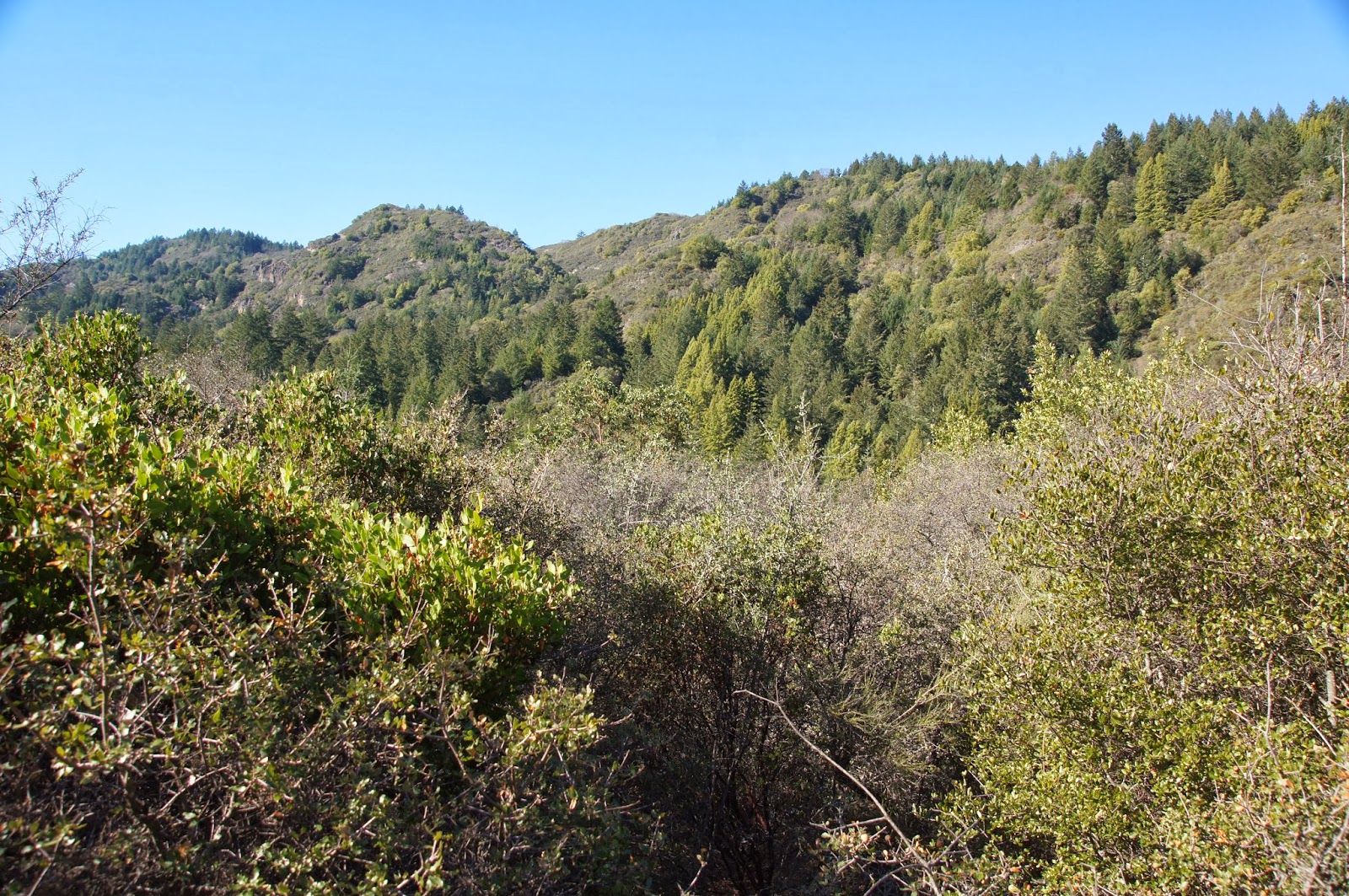 This was the only true sunny spot in our entire hike. And it isn't a convenient stopping place so we didn't stay there for long. Just enough to notice this pretty hummingbird, enjoying the warmth:
We started downhill on the Ritchey Canyon Trail and immediately plunged back into the woods. The trail segment all the way down to the first creek crossing is very steep and slippery and caution should be taken going down there.
Despite the drought, the forest air felt cook damp. Many of the downed wood had fungi growing on them.
The fungi, an essential component of the forest ecosystem, decompose dead organism and release the nutrients back into the ground to be used for new growth. The fungus lives its life underground or within the dead wood, out of sight. Unless, of course, it's fruiting.
The shade was thick and there was very little undergrowth. Of what did grow under the trees, I found this delicate plant the prettiest, even without its inside-out flowers:
After crossing the creek the slope became gentler and the trail widened again. We continued walking on the north side of the creek and Papa Quail continued searching for the little brown birds that chirped in the vegetation. Eventually, with a lot of patience and some luck, he spotted one that was staying put long enough to be photographed:
We didn't run into the bobcat again. More and more hikers were coming up the trail, though. Soon we were going past the Hitchcock Site, where the area's once owner used to have a home, and past the campground.
Half a mile of an easy walk later we were back at the staging area. I wasn't sorry one bit for missing out on Angel Island. It would wait for another day. We've hiked in a beautiful redwood forest and seen a bobcat: what more could I ask for?
And, yes. We did stop at one winery on the way back home. We were in Napa Valley wine country after all.