Looking for the Lost Palms of Joshua Tree National Park

Our desert tour was nearing its end. The weather, which was very cold and even stormy when we started, has gradually warmed up. After our tour of Hidden Valley, my friend announced that it had warmed up enough for us to go camping. So we spent the night at the Cottonwood Campground, at the south part of the park. We were lucky - it was a moonless (and cloudless) night and we had a great time trying to make out all the constellations we could see. A full starry night is a rare treat for me. I hardly get to see stars in the light-polluted and murky-aired Bay Area.
After a blissfully quiet night we packed our gear and headed to the Lost Palms Oasis trailhead.
Papa Quail and I hiked this trail about 10 years before but I didn't remember much of it. I did remember the extreme heat, and the wildlife encounters: hummingbirds and a rattlesnake at the oasis.
The weather on our hike this time was perfect: sunny and warm, but not hot. My friend and I decided to skip the short Mastodon Peak loop and went directly eastward in the way of The Lost Palms Oasis.
The trail begins up a shallow wash and, passing on the second chance to go up Mastodon Peak, it continues on a high plateau. 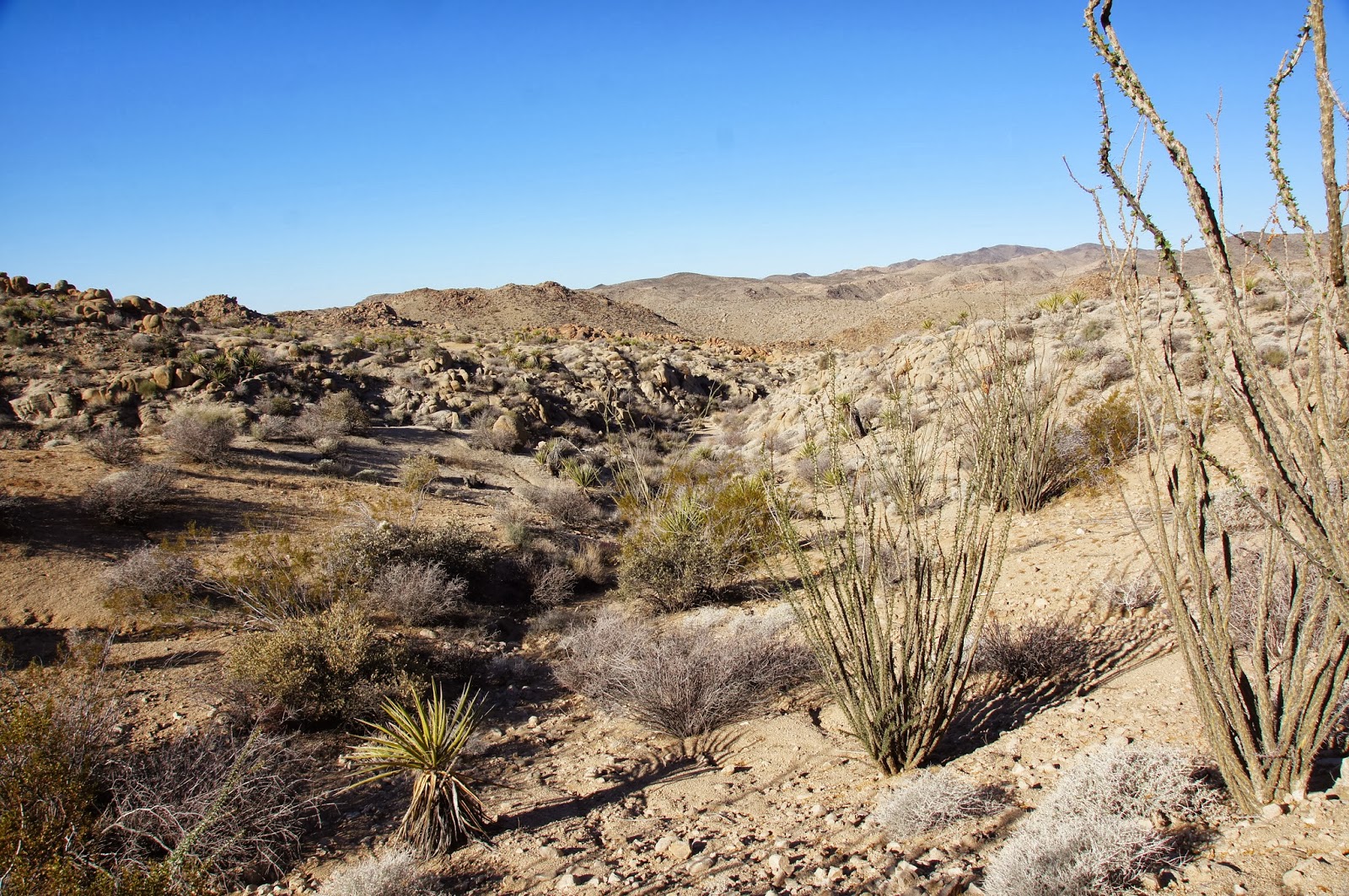 There are no Joshua trees in this part of the park. There are, however, plenty of large ocotillo bushes all over the place. Perfectly adapted to the heat and aridity with their tiny, seasonal leaves and their large, ominous thorns, they send their spiraling, non-branching branches upward, reaching for the cloudless big blue.
We were there a month too early to see the ocotillo in bloom. We did, however, fond one ephemeral ocotillo in a different locale in the park that was blooming. Bright red blossoms, like hand-held torches. Here's a photo of that early-blooming ocotillo:
Little birds chirped all around us. They were mainly sparrows, though not the species we usually see in the Bay Area, like this black-throated sparrow:
Or this chipping sparrow:
And of course, the phainopepla bird that can be seen guarding almost every desert bush:
Although we saw no Joshua Trees on that side of the park, the rock formations we saw along our path were no less impressive. For some time, for example, we walked along a long granite wall so straight it looked almost as if laid down by people: 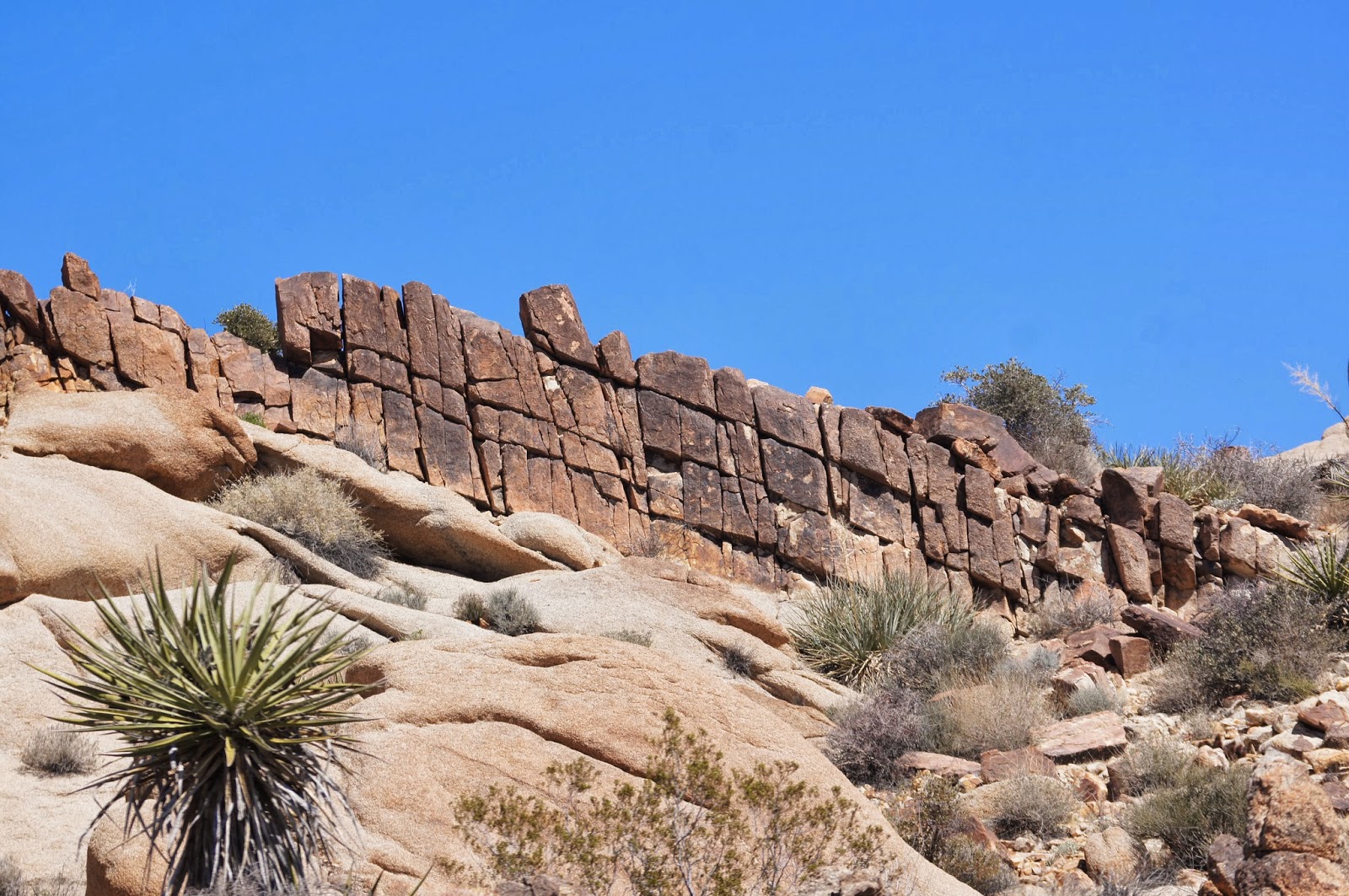 And in another place, the wall was weathered down into a line of jagged granite teeth: 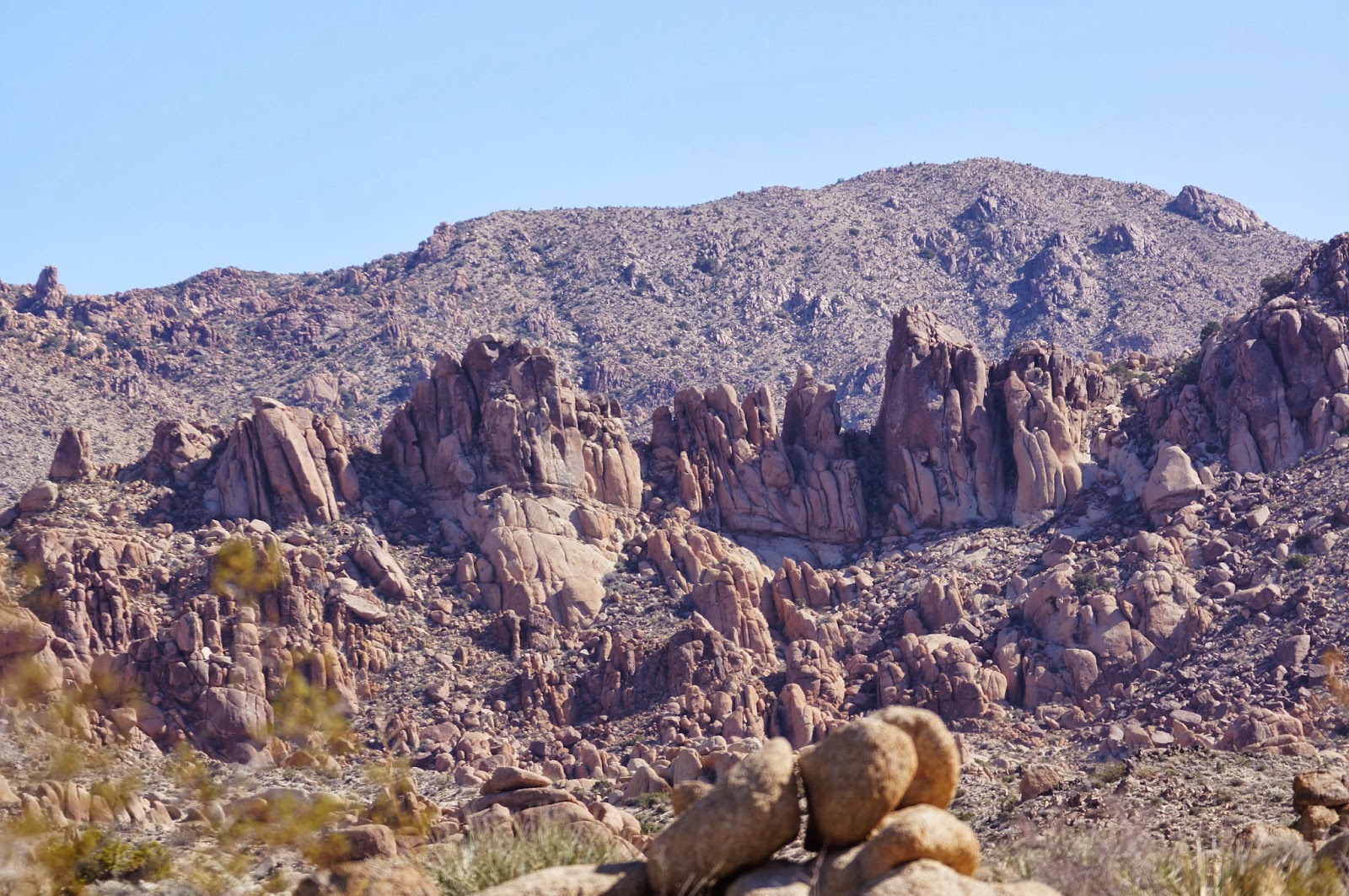 Some of these rocks really enticed our imagination:
Interesting weathering marks:
The rocks are there year round, of course. But the reason we went there in March was to see the desert flowers in bloom. I was there, at the south region of Joshua Tree National Park that we finally saw many wildflowers.
There were plenty of flowers along the high sections of the Lost Palms trail. It took awhile, though, before we realized they were there.
There are so tiny! Merely half an inch above the ground. There were many patches of them, though. All we needed was to kneel down before the white crowns.
Once we knew where to look, they were suddenly everywhere, those tinsy-winsy beauties.

So we walked on with our eyes on the ground. (Not meaning to say we ignored the larger vegetation around us).
About half-way the trail enters a wash and follows its route. 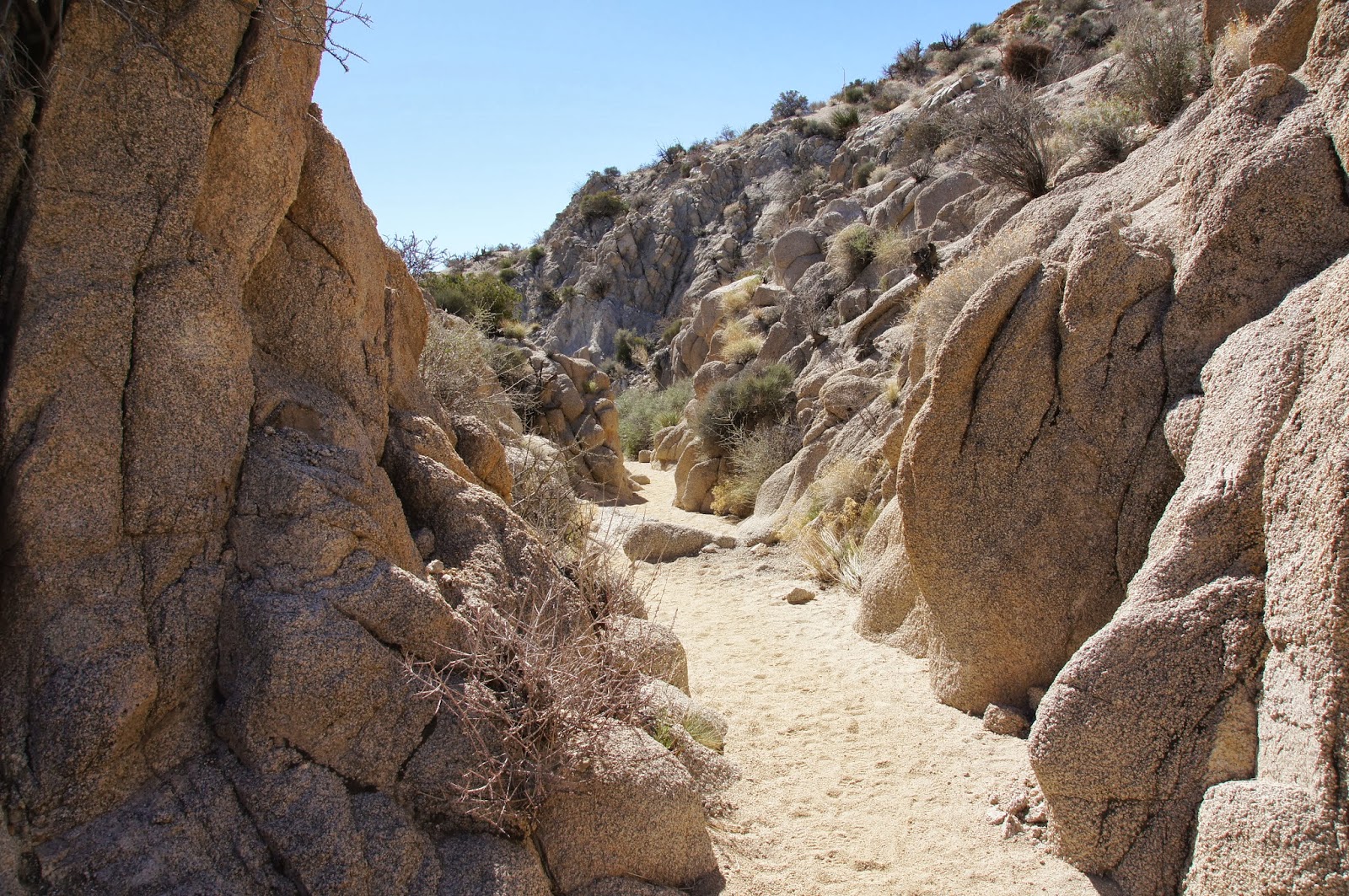 At that point the temperature got high enough and we were worked out enough to have welcomed the shade of the junipers that grew along the wash.
Then the trail climbed up again and we found ourselves transversing a plateau once more. A splendid view stretched before us, of a mountain range and a blue lake below it: we had a direct view of Salton Sea and the Santa Rosa Mountains.
Time was passing and the sun was right above us. As we approached our destination, about half a mile before the oasis, we were looking down at the trail as it descended sharply into a deep ravine: 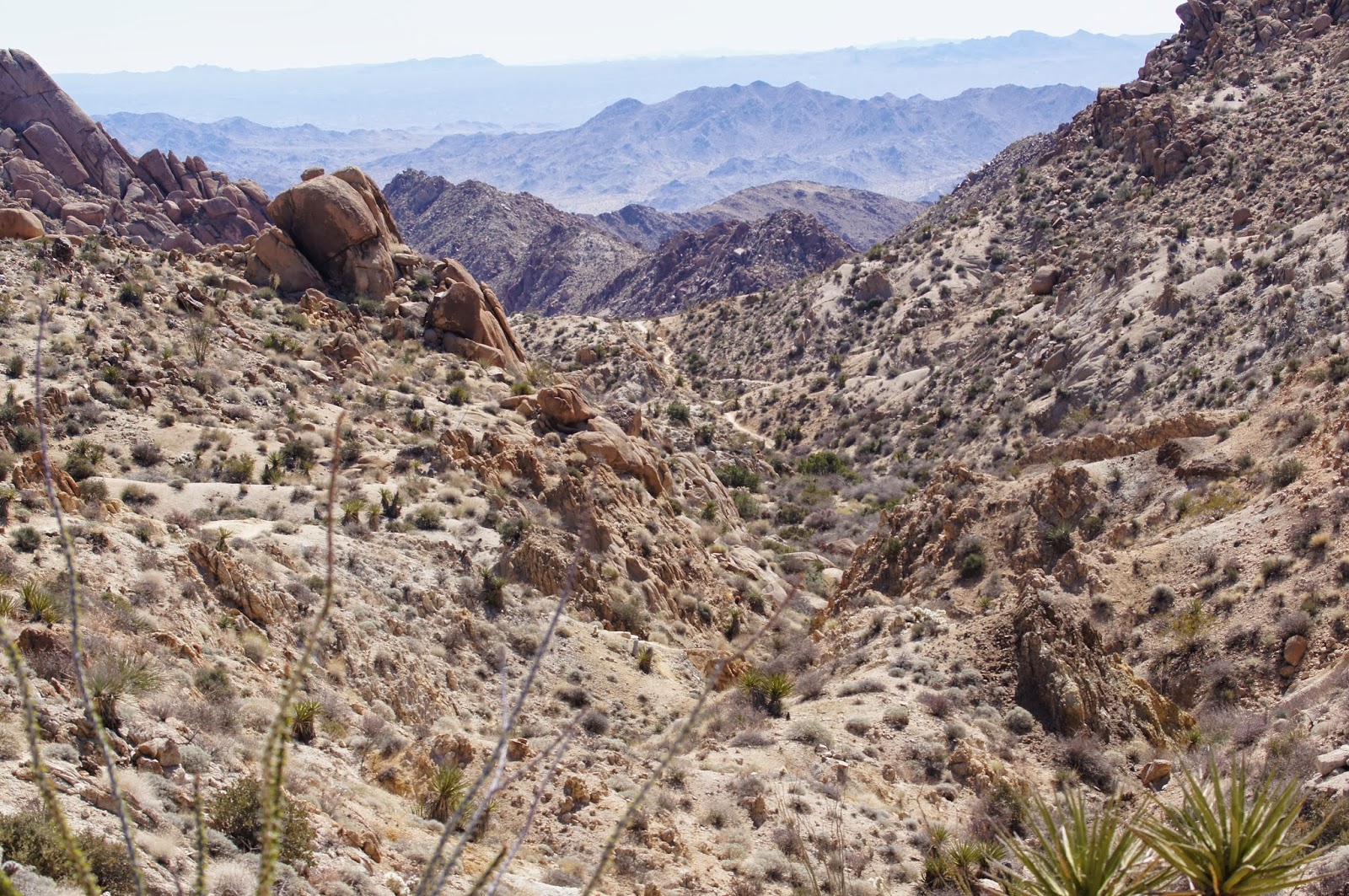 We started down, slowly and carefully. Almost immediately my friend kept with delight: right before us were flowers so conspicuous and so pretty that we stopped for a good long while and photographed them from every possible direction. My friend, who was somewhat disappointed of the weak bloom we have encountered in the past week was finally satisfied: she has found her 'wow!' flower.
While the scarlet milk vetch was definitely the botanical highlight of our hike, we soon run right into our zoological highlight: a chuckwalla lizard, sunbathing on top of a rock next to the trail.
Not as close as the flower, but it sat there for a long time and we had a zoom lens.
It was all downhill from there: straight to the Lost Palms Oasis. 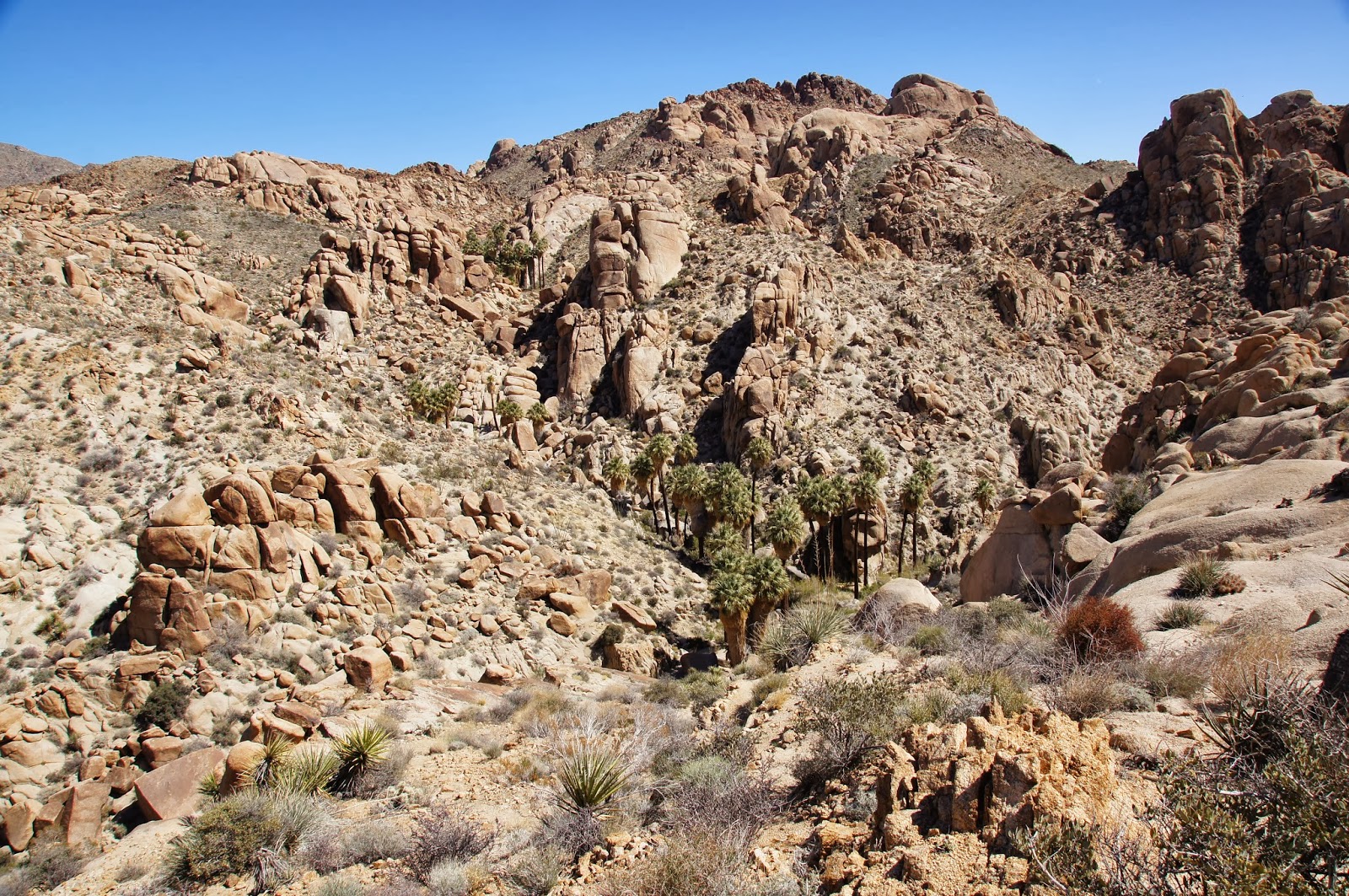 I suppose there are hikers who settle for gazing at the saught-after palms from the height of the cliff. The descend into the oasis is steep and narrow and, although short, is the most difficult part of the hike. 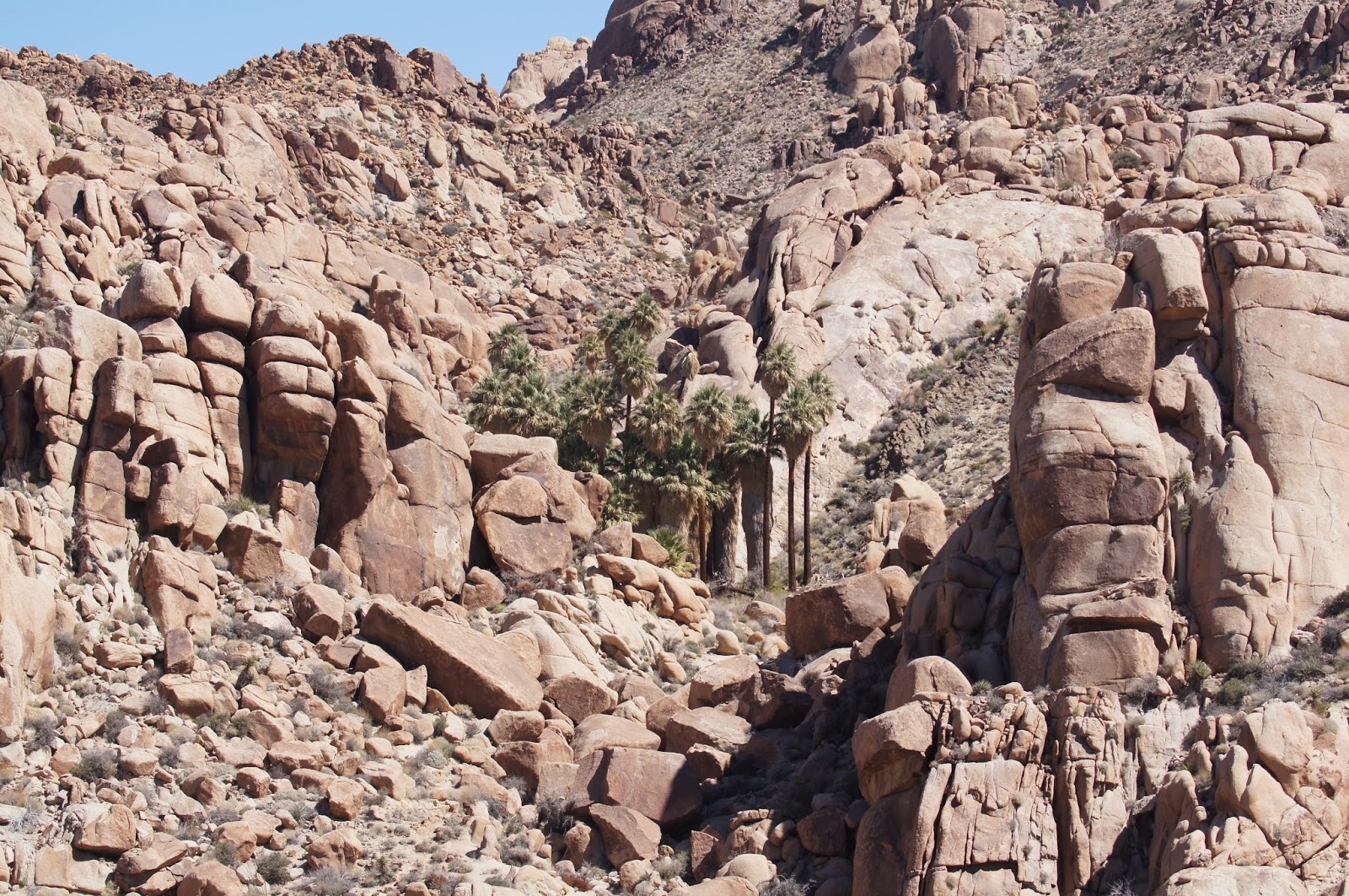 What awaits below, though, is worth every drop of sweat. The Lost Palms Oasis is home to the largest grove of California fan palms within Joshua Tree National Park.
And for a good reason too: there is water there. Open water. Close to the surface ad above it. 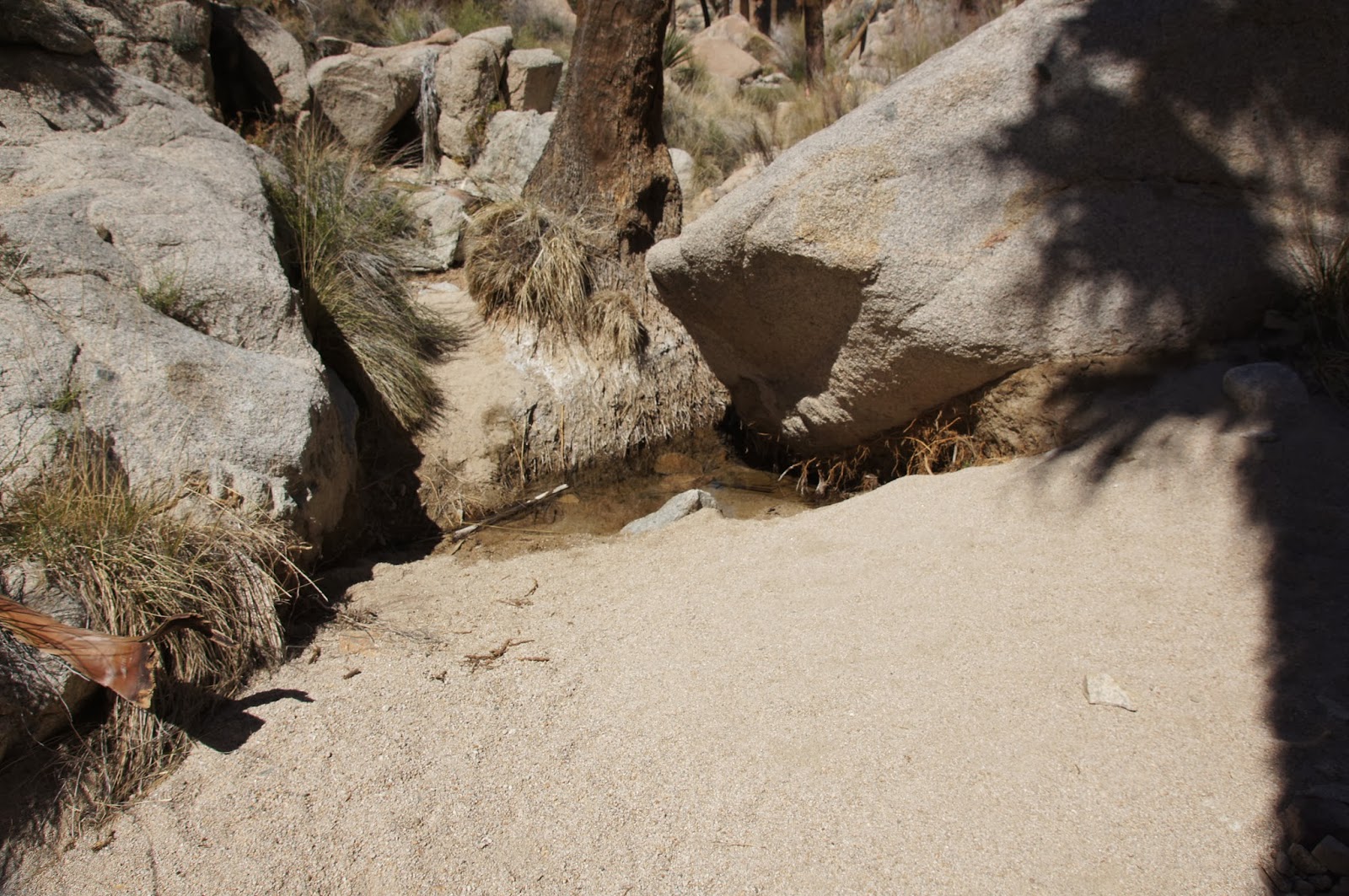 Wherever there's water, there's life. My friend and I, hot from the hike, sat down in the shade and appreciated the birds.
We weren't alone there. Behind one of the palms, on a large slate of granite, was a couple busy with activity that I would normally find fascinating enough to witness. This couple, however, belonged to my own species, which made us feel bit awkward, and eventually move away.
The day turned really hot by then. We made our way slowly up to the trail and headed west back to Cottonwood.
Although the sun was already on its way down, the heat only intensified. We walked silently, making a few rest stops wherever we found a bit of shade.
As we got near Cottonwood, we saw a small group of youth heading out east toward Lost Palms. They asked us how long it was and we told them, adding our opinion that it was already too late to get there that day. They listened, said nothing and continued on. Soon we realized that the 'small' group was just the spearhead of a much larger, and a very stretched out group of hikers, all young and in various states of undress. They were very spread-out and many of them seemed already tired and dragging their feet. What was even more alarming: they carried very little water with them.
We finished our hike and drove quickly to Cottonwood ranger station to report that ill-prepared group. I guess they eventually did turn back since we didn't hear of any disasters in the news later that night.
I bring this story here as a warning and an example. The leading cause of fatality in desert hikes is heat stroke. Anyone going on a desert hike should be wearing sun protection, carrying plenty of water and pacing the hike according to the time and ability. With adequate planning, this trail is a true treasure for hikers and desert lovers.


Many thanks to my friend עננת for identifying the plants and lizard. And an extra-special huge Huge thanks to her for this big desert trip and for that special time of us together! Can't wait till we get to do that again     :-)
Posted by Mamma Quail at 7:29 PM