The Other Side of Kirkwood 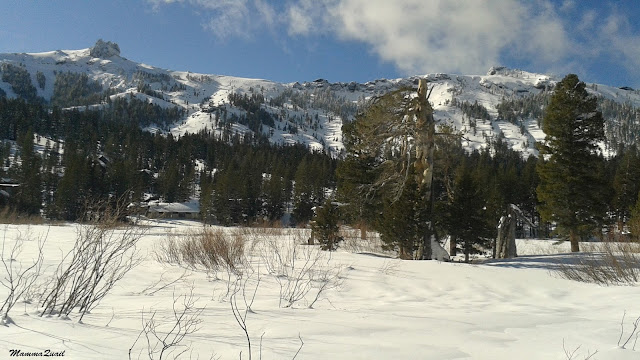 There is a loop trail that goes around the Kirkwood Meadow, just below the slopes. The trail might be visible in summer time too, I don't know. In winter, however, it is well marked on the snow, groomed to perfection for snow-shoe hikers and cross-country skiers.
I didn't plan to do this trail. I arrived at Kirkwood Mountain Resort with the intention to ski down hill. But it was a lovely day after three consecutive days of awful weather and many people had come to enjoy the fresh snow. After I dropped the chikas in ski school there was no more parking within the resort and the waiting line to get a lift pass was enormous. So I drove off to the cross-country lodge where I managed to find parking, and instead of marching all the way back with my skis I headed up to the lodge and rented me a pair of cross-country skis and boots, bought a trail pass for the day, and headed to the Meadow Trail.
So technically speaking, I didn't hike that trail. But cross-country ski is something I usually do when down-hill conditions are not to my liking and I never really built up the skill to be any good at it, so I skied at hiking speed, enjoyed the scenery very much and stopped frequently to take photos. (The photos here were all taken by my phone, please forgive their inferior quality).

The trail map I got said: 'The Other Side of Kirkwood'. It turned out to be a beautiful side. 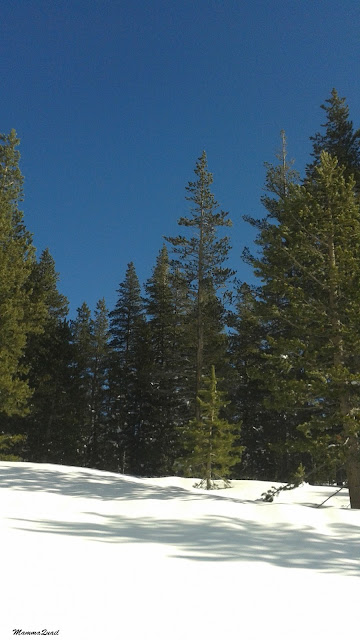 The trail is very nicely groomed and is mostly flat, made for easy skiing. The temperature, however, was higher than optimal, making the snow more sticky and resistant. Still, I could glide easy enough on the trail. I hardly had to mind other skiers. There were so few out there. 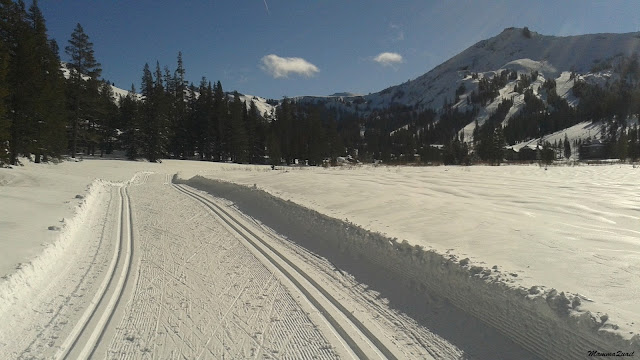 The day I was there was the first clear day following a prolonged snow storm, The snow, so desperately needed there, had painted the trees in white. A very obvious line separate the trees that remained frosted the day after the storm. 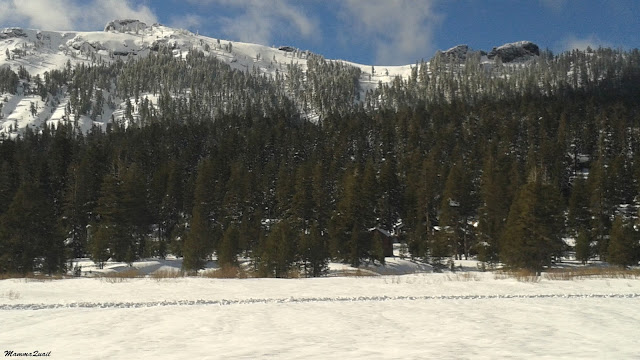 The local conifers are evergreen and have a very nice contrast to the snow-whire slopes. The occasional bare tree is usually dead, but it too can look very beautiful as part of the winter scenery. 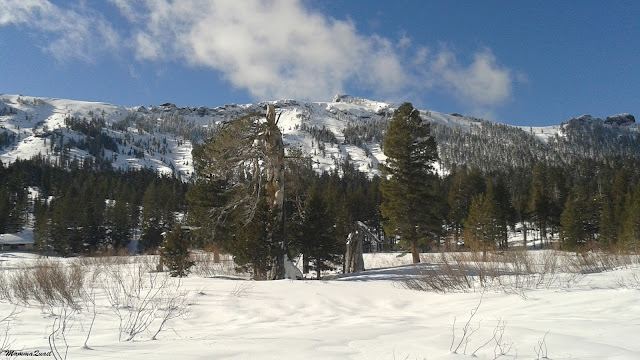 But not all bare plants are dead. The reddish twigs that stick out of the snow belong to willow shrubs, all dormant, sleeping the winter off. 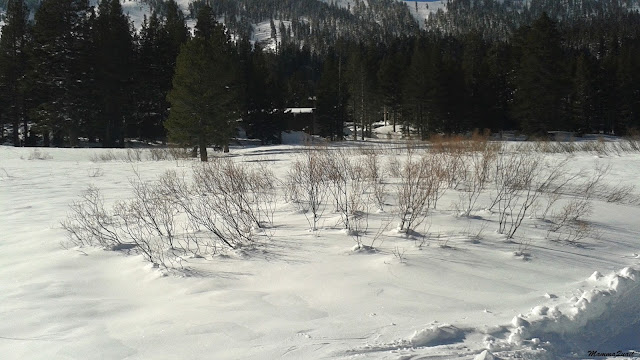 Even when dormant the willows look pretty, reddish against the white snow background.
The creek was running still, deep in the snow. The trail bridges over the ice-cold stream.
Dips, bumps, grass heaps, shrubs and gopher holes, all equally covered with a thick snow blanket, nicely quilt-patterned by the winds. 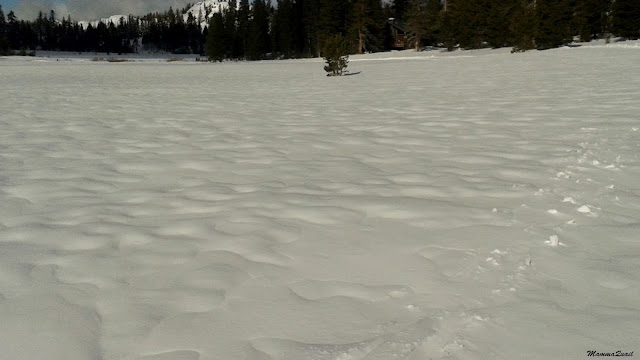 Slowly I made it to the far end of the meadow. I didn't take a backpack with me, and had no water or snack, so I crossed over to the resort's Village and entered the cafeteria. It was so crowded in there, the only place to sit was at the bar.
Oh, well. 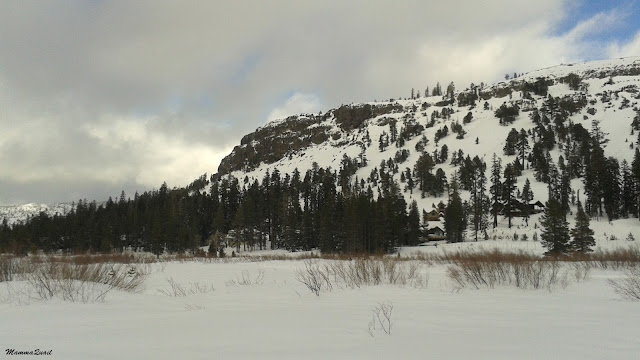 After my break I waddled back to the meadow and somehow managed to hook on the skies again. I already learned that beer can affect my ski run choices, good thing that the meadow trail is flat.
The cool air quickly cleared the alcohol fumes and I was on my way back north on the other side of the meadow. The clouds started gathering again and soon the sunlight dimmed. 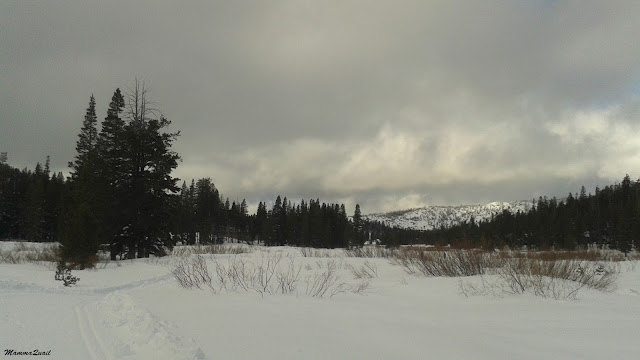 By then I had already felt considerably more confident on the narrow cross-country skies and I picked up my pace. The wind picked up too and I wrapped my coat tighter. The clouds were racing across the sky and the gaps between them let down bright patches of sunlight that made the snow glisten. 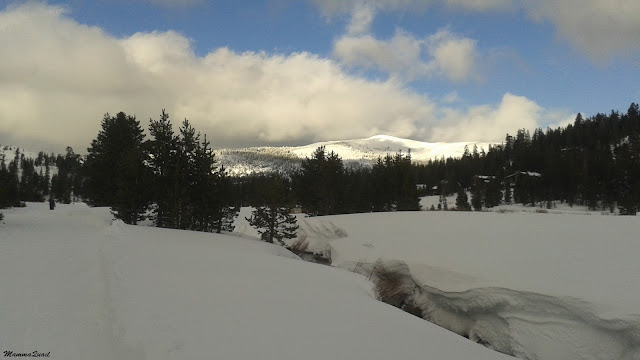 Closing the meadow loop I came across the creek again. At that place is was frozen nicely. Although it was very tempting, I didn't test the ice thickness. 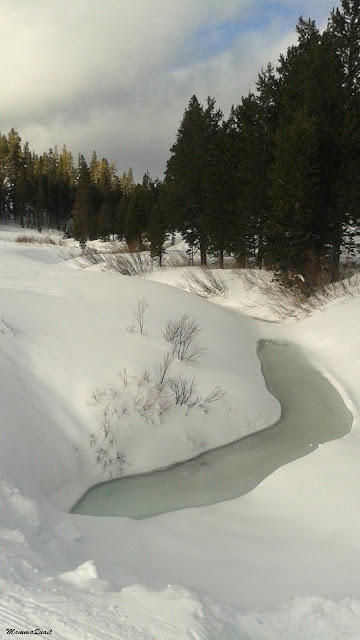 The outer meadow loop is roughly 3 miles long, the perfect distance for a nice, easy snow-shoe hike or ski. I had finished it just in time to go and pick up the chikas and their friend from ski school and drive out ahead of the crowd. I even had the time to stop on my way down the mountain and appreciate the sunset.

This lovely ski-hike was on the last day of a planned 3-days ski trip.
We had arrived on Kirkwood on Monday, December 21, and were trapped there by a snow storm that had the roads blocked on all directions. We floor-camped at the resort's Red Cliff Lodge with a couple hundreds other people who were stranded there as well. The resort's people made sure all were tucked safely indoors, warm and dry. They had fed us, had a separate space for families with children (there were quite a few there!) and even dispensed sleeping bags to the kids. On the following morning the road east was still closed but the way north to South Lake Tahoe had reopened. I had to dig my car out of the snow and it was a very slow drive all the way around the mountain back to Somerset where we were (we had planned to be) staying the nights. That second day of our trip felt like it completely gone missing. It was only on Wednesday, December 23, that we finally had made it in and out of Kirkwood as planned.

Anticipating the possibility of having to dig my car out of the snow I had brought a shovel with me. That shovel came in handy for other people as well. It is a very useful item to have in the car when going out to the snow. Chains, are, of course, a must (or a 4x4 with snow tires) and it very much helps to have a pair of gloves (not mittens) and a head lamp in the car if needed to install/uninstall the chains at nighttime. I make sure to have an emergency pack with personal essentials in the car. It doesn't take much space in the car, and getting stuck is a real possibility. It is important to be prepared when going out to the snow. It can be, and usually is a lot of fun, but a quick turn of events can make it a disaster.
I cannot wait until the next trip up to the snow!

Many, many thanks to the people at the Kirkwood Mountain Resort for taking such an excellent care of all of us who got stranded there on Monday, December 21, 2015. It was a Winter Solstice we'll never forget!