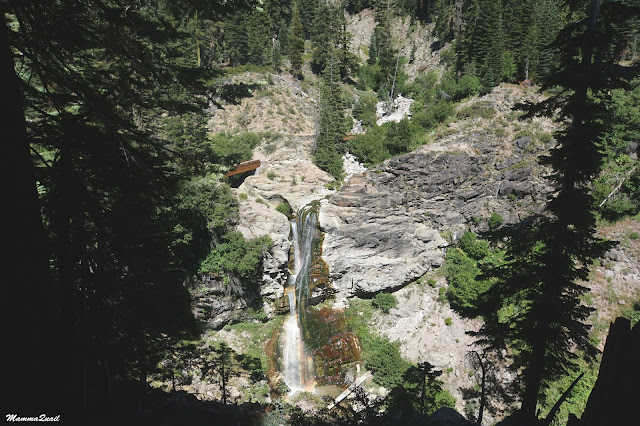 Last summer I was privileged to share the wonders of Lassen Volcanic National Park with a group of families from the Bay Area. On our final group day we hiked to Mill Creek Falls, by the south-west entrance to the park. My original plan was to take the group hiking to Kings Creek Falls. That trail, however, has been closed for maintenance work. Although hiking to Mill Creek Falls was my Plan B, it was no less a spectacular hike.


I hiked this trail twice last summer. The first time was early in June. Normally the beginning of the bloom season there. Last June, however, wildflowers were already at peak bloom.
The trail begins with a deep drop into the canyon. Right on the first switchback turn I saw the most prized flowers: a few coralroot orchids growing under the trees.
And wherever there are flowers, there are butterflies too. There were many of them, and most were to hyperactive and wouldn't sit for a photo. I got lucky with this one, though.
At the bottom of the hill there's a happy creek with water that run directly from Sulfur Works. The water is no longer steaming. Beyond the bridge - the next hill, all covered with green mule ear plants. 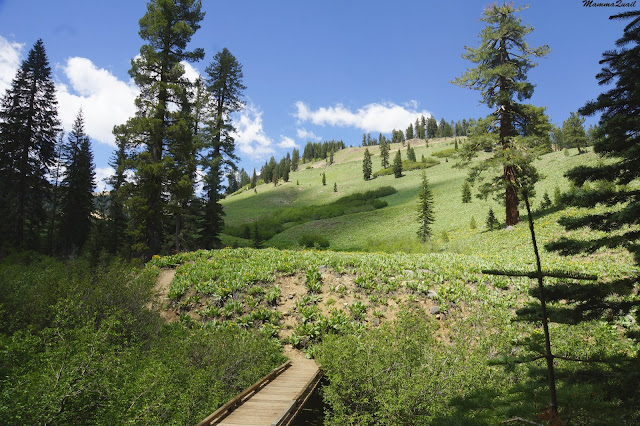 The mule ear bloom was still on the up-curve. Most of the plants sported at least one open inflorescence, and none that was already done.
This large yellow aster attracts a myriad of non-specific pollinators. More butterflies too. 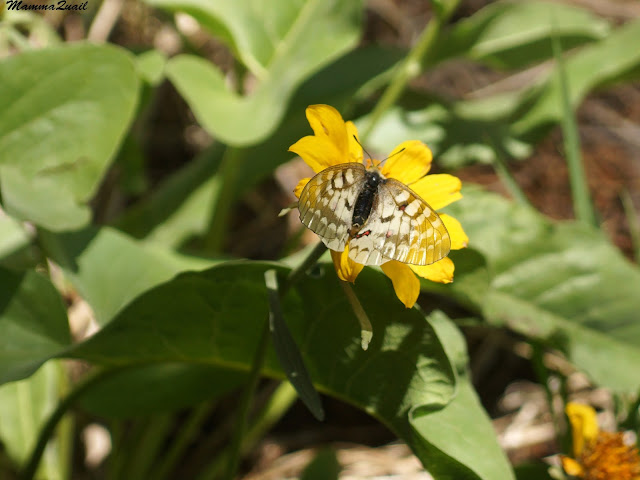 The mule ear is the dominant plant on that open hillside, but walking between them reveals that it isn't the only one. As I was walking down the trail and around the hill's contour I spotted more wildflowers nestled in the sea of mule ears.
Phacelia, one of the hardier genera, had more than one species represented on that hillside. They were making the next story down of herbaceous wildflowers. The little blue-eye mary below was the ground floor.
On my June hike I noticed the flowering buds of the owl's clover, which was just beginning to wake. By the end of July it was pretty much done.
After the first descent from the trailhead the trail continues along the contour of the hill in a mild and almost lulling up and down wave. On the first part it is mostly out in the open, but occasionally it goes into the trees and their blessed shade. There, in sunny patches, some forest wildflowers were making their statement.
What looked like complete greenery coverage from afar turned pretty patchy up close. Enough exposed soil between the plants for a tired butterfly to rest upon.
I went on at a slow pace, stopping every now and then to look closer at something that had caught my eye, usually a wildflower.
That, of course, had slowed me down considerably. I was enjoying much that early spring celebration.

The hound's tobgue is very common early spring flower. There are lots of them in the  Bay Area. It was on that hike, however, thatI saw a white one for the first (and so far the last) time.
The first time I hiked that trail was 15 years ago with Papa Quail and his parents. We were going up and down the mild slopes of the hillside contour. At some point Grandpa Quail decided that he had enough and couldn't go any further so we turned back. As I later found out, we had turned back on the last trail curve before Mill Creek.
That last trail curve is completely forested. The trees' shade was very much welcomed on both my June and July hikes. My June hike also featured the forest bloom:
And it wasn't just wildflowers bloom: surprisingly fungi were blooming too. Not many, but still. I didn't expect that on warm and dry conditions.
A holed log revealed that this was woodpecker's realm. I didn't se any of the local woodpeckers, though. 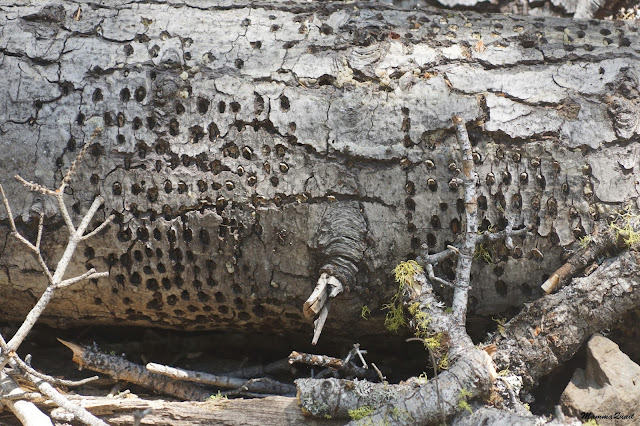 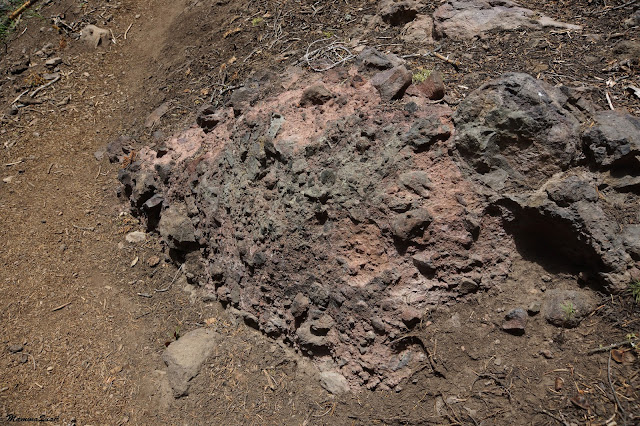 I was descending along Mill Creek, listening to the increasing noise of rushing water. Then, all of a sudden there was a viewing terrace and the Mill Creek Falls came into view in all their glory:
There were many people there. On my June hike it was nearly impossible to get a clear shot of the falls without any human photobombs. Some of the visitors had even left the trail to hop on the rocks right above the falls at the edge of the precipice! There were somewhat fewer people on that trail on my July hike there. The group that came with me and maybe a couple others and that was it. There was less water coming down the falls too.
After enjoying the view I continued down the trail to the top of the falls. There were more lovely flowers on the way down.
Atop the waterfall there is are two wooden bridges that span Mill Creek and one of its tributaries. I crossed them and found a nice shady corner where sat down to rest and eat my lunch. A bright red Indian Paintbrush bloomed between nearby rocks and I looked down at the waterfall and the canyon below and got lost in thought.
At the time I was reading about Ishi, the last of the Yahi people that used to live in that area before the gold rush. Within a few decades since the first white settlement in the Sacramento River area, the Yana tribe of whom the Yahi were the southern tribelet were completely eradicated by starvation caused by the settler's encroachment of their land and by active man-hunting and a series of massacres that left but a handful of fugitives trying to survive while hanging on to their ethnic and cultural identity. After a final raid had disbanded the last survivors Ishi was left all alone. He suffered loneliness and famine and eventually had turned himself in at a cattle ranch near Oroville where he was taken into custody. Within days he was transferred to the custody of an anthropologist from UC Berkeley and he was taken to San Francisco where he lived in the Hearst Museum and shared his tribal knowledge for five years until he contracted tuberculosis and passed away on 1916.
The deep canyon if Mill Creek was for a while the primary hiding place for Ishi's people . I was looking at the land of people now extinct for the ignorance and greed of the European-descent settlers that flooded California during and following the gold rush.
Eventually I had to get up and move on. The trail continues further into the wilderness but on both hikes I had to turn around and go back.
This is no loop trail, so I was returning on the same trail I went out on. All over again along the hillside contours, seeing the other side go the trees and wildflowers. And eventually that of the mule ears-covered hill, which in June was all alight with yellow bloom.
A month and half of drought later and that hill looked very different:
On my June hike I was walking back quickly - that evening I would drive all the way back home to the Bay Area. Being it an in-and-out trail, I didn't stop much on the way back. I did, however, stop to appreciate the jagged Brokeoff Mountain, towering over the south entrance to the park.
At 9235', Brokeoff Mountain is the second highest peak in the park. There is a hiking trail to its summit, too. But that hike would have to wait for another visit to Lassen, because on my July visit to the park, after our hike to Mill Creek Falls, I took my chikas to hike all the way up Lassen Peak.