One, Two, Trillium: A Spring Hike at Mt. Tamalpais

Date: March 8, 2016
Place: Panoramic, Lost, Fern Creek, Redwood Creek, and Ocean View Trails. Mt. Tamalpais State Park, Mill Valley, California
Coordinates: 37.908512, -122.576210
Length: 4.3 miles
Level: Moderate
I have quite a few unpublished posts waiting in the pipeline, but this hike had jumped the queue. It had too. Please, do click on the images for a larger view.

This spring I'll be leading the Redwood 4-H Camping Project to Mt Tamalpais State Park. Naturally, I wished to take a look at the campground we'll be staying at, up near Mill Valley. The campground access road is gated off, making a perfect excuse (like I needed any) to take a hike all the way down.
I parked my car near the trailhead and was rewarded before even taking the first step on the trail. I heard an unmistakable sound - the fast, loud series of woodpecker knocks. Across the road, atop a high voltage powerline pole perched a pileated woodpecker! This prized bird was busy knocking away, occasionally taking a break to inspect its surroundings.
A couple of locals who passed by informed me tat he has been hanging around in their neighborhood for some time now, making himself heard.

I lingered there for a while, watching that woodpecker pecking away but eventually I had to start my hike. I hoisted my backpack and stepped off the road and down the Panoramic Trail.
The short segment of the Panoramic Trail I hiked on is beautifully decorated with a myriad of flowering shrubs, nearly all home garden runaways. A low-pitch buzz alerted me and I turned to see a hummingbird zooming across the trail and hovering about nearby. Happily, I raised my camera, but the bird flew behind the bush. Papa Quail probably would have waited for it to show itself but I lowered the camera and moved on. I guess I'm not a very good birder.
I turned right on Lost Trail (I don't know why it's called that way, it is labeled quite clearly). the trail drops steeply down the hill with flights of stairs in sections. Before going down I took a quick shot of the scenery: the lovely forest I was about to go into.
It was a gorgeous morning. Clear, sunny, and the air was fresh after the latest rains. I was breathing it all in and my chest swelled with pleasure.
The trail goes through an small area of open grassland before entering the woods. That area was filled with bloom, mostly of this flower:

The bloom didn't go away under the trees. The forest floor was dotted with color. Soon I run into a familiar ephemeral bloomer - the hound's tongue. These flowers start blue and change to pink after getting pollinated, informing their pollinators that they shouldn't waste their time and energy on flowers that were done.
All the ephemerals were up - the milkmaids, hound's tongue, Indian warrior. They also were all over the peak, fruiting, slowly yielding the scene for the next wave of bloom.
The next wave of bloom was marked for me by the irises I saw along the trail. Not many, but always strikingly beautiful.
Shortly after entering the woods the trail takes a steep dive down the slope. Just before that I got a fantastic view of what lies ahead: a grove of redwoods apparent through a tunnel of arching laurel trees. 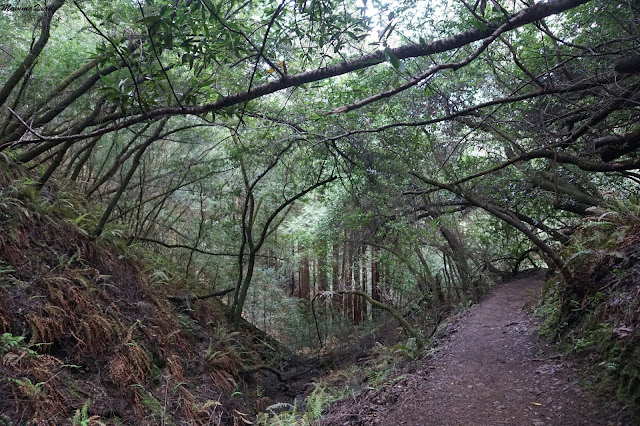 The forest of Mt. Tam is widely known for its majestic redwood. The bigger trees are down by Redwood Creek, the lower part of which is within the Muir Woods National Monument. On higher elevations the redwoods are thinner, and share the slopes with laurel, oak and fir. The smell of this forest, by the way, is intoxicatingly good. Particularly wen wet.
More forest wildflowers along the trail. I figured fairly early on that this is going to be a slow hike, as I kept stopping to check out the flowers.
And not just the flowers. A turned over leaf showed an intensely deep purple underside. 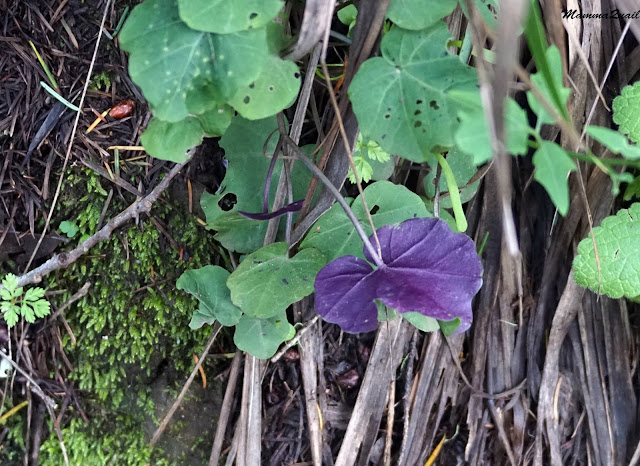 But the biggest treat was still a few steps ahead.
I turned right to Fern Creek Trail and continued downhill. The forest was very lively, even noisy. Calls of jays and woodpeckers, whirling wind in the canopies, and the loudest of all - the constant hum of running water. From every direction. The veins of the forest were pumped full of life-bearing water and that sound was the most joyous of all.
Coming to a sharp curve of the trail there was a small tributary gashing down hill. Very pretty stream. My focus, however, was on the creek side where I saw blooming trillium: a sight I haven't seen in quite a while, having been missing its short blooming season in the past few springs.

Trillium is a beautiful and unique flower of the pacific northwest. It thrives in wet woodlands and I often see its trio of leaves on my forest hikes. Somehow, though, I had managed to miss its bloom. Well, on this Mt. Tam hike I was compensating big time.

And yes, the creek was pretty too. 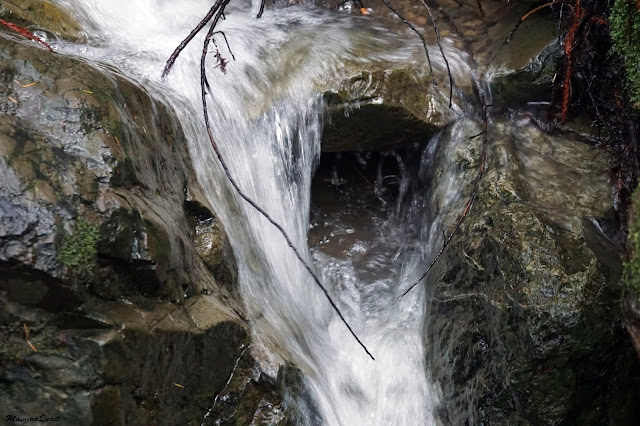 After detaching myself from the patch of trillium I crossed the tributary and continued down the trail. I saw more species of wildflowers, now that I was deeper in redwood territory.

I made it down all the way to Fern Creek, which was running high.  A narrow metal walkway leads the way to the water and the creek is transversed across a flattened log lain over the stream.
A couple of hikes were down by the creek and moved sideways to allow me to pass. One of them grinned when she saw me switch lenses for a better view of the water.
Its an uphill walk from Fern Creek to East Alice Campground. I took it with a stride and my stride came to  screeching halt when I run into an unexpected obstacle: an unfortunate redwood had fallen on the trail 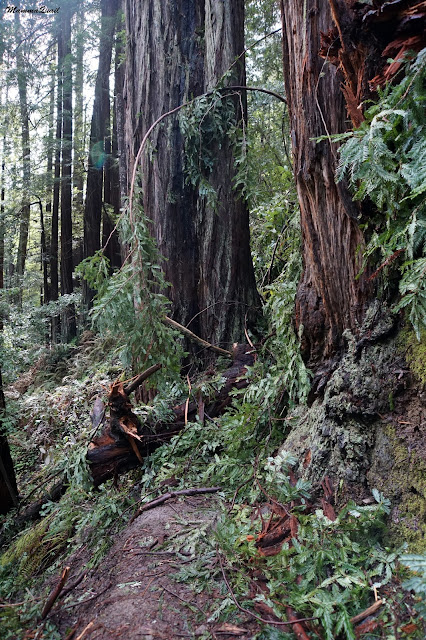 People before me had already trampled makeshift paths below and over the fallen log. I climbed gingerly on top of the log and peered over to the disaster area.
The redwood tree, not hugely big but decent size still, succumbed to the rain and mud and came crashing down, breaking other trees where it fell. Broken branches and torn pieces of bark littered the entire area and the air was filled with the odor of an injured tree. 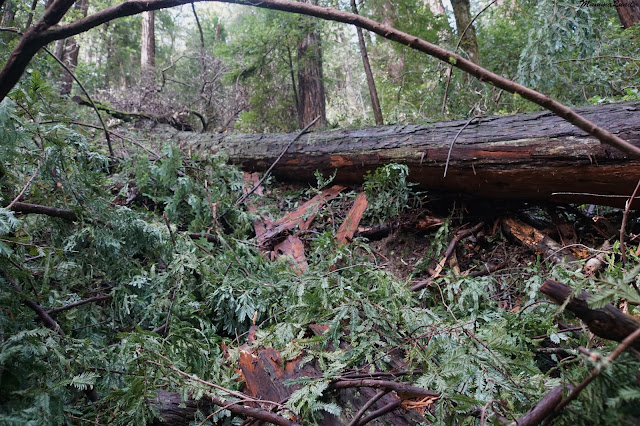 I climbed down on the other side, wary about the possibility of other trees falling whilst I was there.
On the other side - more trillium. I immediately forgot all about the falling tree dangers.
The trillium comes in white, purple and variegated. I saw all types there.
Next to the trillium were other redwood forest flowers, such as this delicate violet.

I resumed my hike and soon came across more fallen trees. One of them tore a big hole in the trail. It seems that particular slope was hit hard by the recent storm. 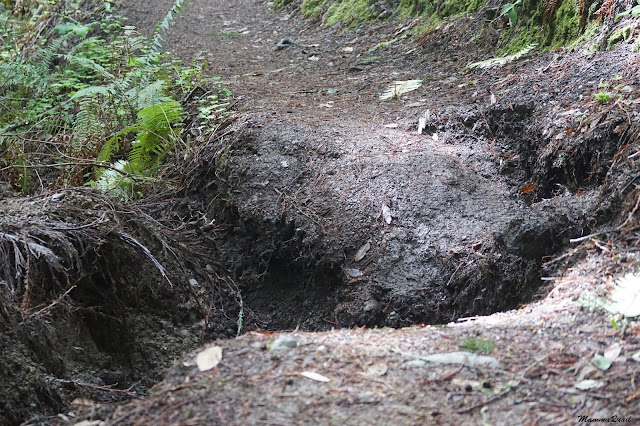 Other trees caught my attention. Most non-redwood tree trunks were coated with moss and many also had lush ferns growing anthem, like wild beards. 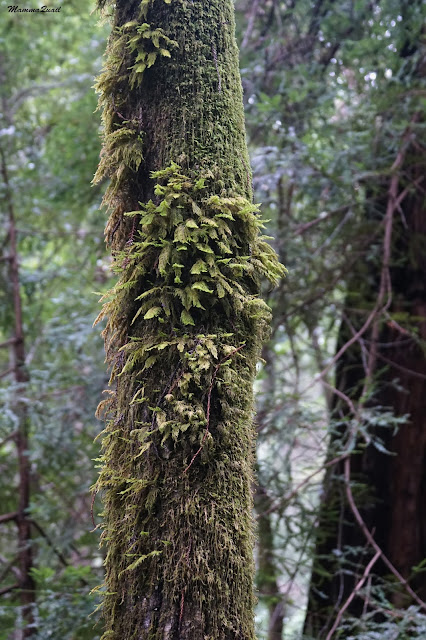 Fallen logs had different decorations - blooming bracket mushrooms. These mushrooms are the fruiting bodies of the fungus that eats the dead log on the inside. 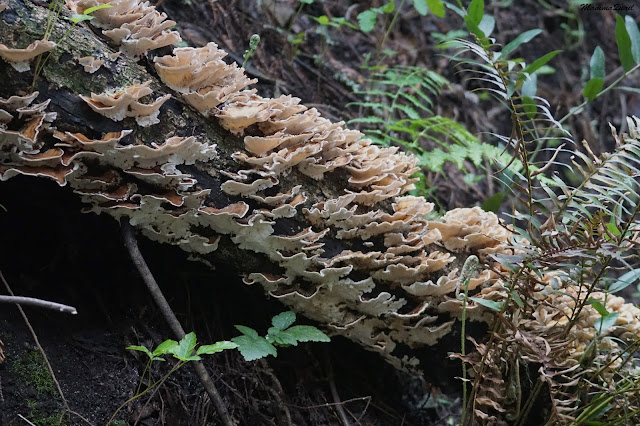 Despite my slow walk I made it to Alice Eastwood Campground in good time. It was perfect time for a lunch break so after inspecting the campground I sat down to eat.
Two ravens came by and stood near, looking at me. Then they crowed. Eventually they left, unsatisfied.

From Alice Eastwood it is a short and steep trail down to Redwood Creek Trail. Redwood Creek was wide and running high as well. The trail, wide and partly paved - partly boardwalk, was full of people. I was astonished to see how many people were walking down there on a work day morning. Certainly after seeing very few other hikers on the trail so far.
After checking my map I realized that the Redwood Creek Trail comes directly from Muir Woods National Monument. Nearly all he other visitors had come from there, extending their Muir Woods hike into the  State Park area.
And they were tourists. A vast majority of them. I heard many languages spoken, some quite loudly (even though the signs asked to keep it low). English-speaking people I chanced to talked with were also mostly tourists, from other states.
They all came here to see there redwoods.

At that point I was moving along quickly. As much as I love that scenery, I felt frustrated by the numbers of people. The morning calm was gone, giving way to an upsetting commotion.
And still, there were many beautiful sights there, beckoning me to stop and look closer.


I continued along Redwood Creek, enjoying the rush of water and the fresh forest smell, trying to ignore the loud yells of a group of teens on a field trip. The teens, nearly all focused on their phones, were shouting to one another, ignoring the majestic views around them. I suspect that later on they won't remember a thing from this place. 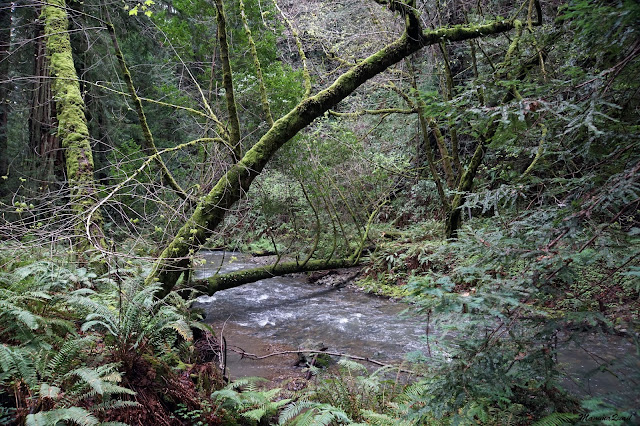 Ferns were everywhere around. Beautiful, lush, and dripping water. I could hear the water flowing beneath the vegetation all around. 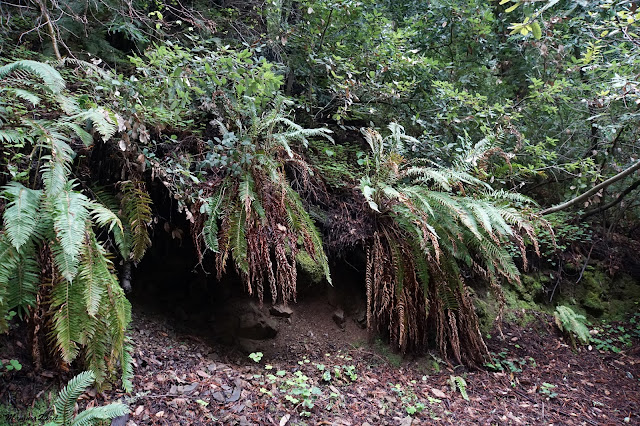 I was relieved when I finally reached the ten to Ocean View Trail and started going uphill again, putting more and more distance between myself and the human noise below. I was also going fast now, thinking I should make it back home on time to pick up my daughters from school. I was also getting a good and well needed workout.

New fern leaves are particularly beautiful, delicate and charming. They made me stop my uphill stride. 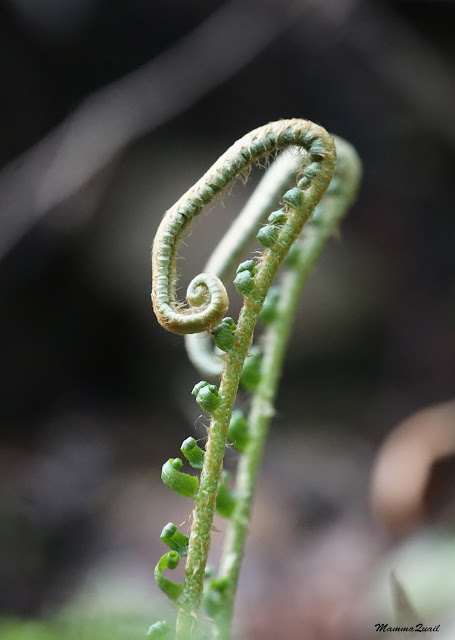 I continued uphill somewhat slower. Now that the people's noise was muffled below I felt more like hiking again, and giving more attention to my surroundings. 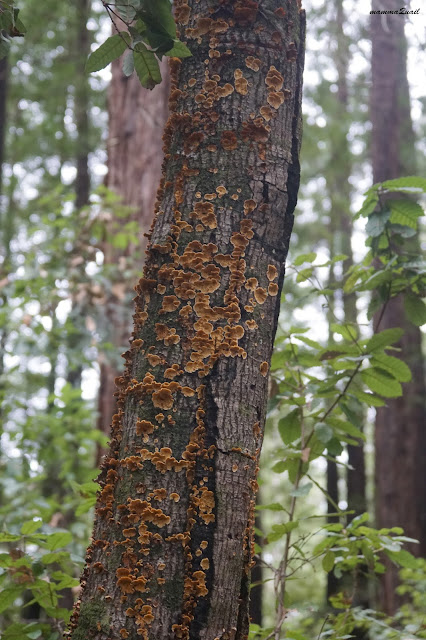 More hikers were coming down the trail, passing me on the way down. There were local, in small groups, pairs or single like me. I was already on my way up and out.
But then again - more trillium :-)
The higher I walked, the thinner the redwoods were. And fewer. Other tree species became more prevalent and in thicker groves. Like this cute fir grove right by the trail.

I kept moving up quickly until I came upon another obstacle - more fallen trees across the trail. This time it was California laurel that was downed. The smell was absolutely incredible. It may not look like much, but I had to do some fancy acrobatics to pass his one.


I completed my loop and went back up on Lost Trail out of the forest. Some of the Poppies had opened up by then. Not too many though. At the time the clouds had already rolled in and the day turned overcast. Most poppies had remained closed.
The last flower I photographed on my hike is not a California native, but it was cute and pretty and I'm pretty sure hasn't escaped from anyone's back yard.
And then, just as I made it back on Panoramic Trail, that low-pitch buzz again. This time I took the time and waited until the tiny bird finally settled on one of the bushes.
There! A hummingbird! One of the spring announcers - the rufous (or Allen's?) hummingbird. Patience pays off.

Later this spring I'll go back there with my 4-H group. I hope they'll be impressed by the place as I have. I hope they will fall in love with it as I have. I told them not to bring any electronic devices. The forest in more than enough to fill up the soul.


Many thanks to members of the California Native Plants Society for their help in identifying wildflowers!