Death Valley is on the edge of the Great Basin Desert. It isn't a valley carved by a river but a graben - a depression caused by tectonic forces. Badwater Basin is located in the south region of Death Valley. At 279 ft below sea level, it is the lowest place on land in the western hemisphere. Being a basin, it has no outlet - all the runoff water collected into it evaporate eventually, leaving salt deposits behind.
There's water there: spring water. This water is alkali, not fitting to drink, hence the name Badwater. There are organisms whole in this water, however. The endangered pupfish is one of them.
Badwater is one of the must see places in Death Valley National Park. Not only because it is the lowest place in America, but also because of its outlandish beauty and fascinating natural history. It is also easily accessible to anyone.
Naturally, almost every time I visit Death Valley I also stop at Badwater. Like a chameleon, this place keeps changing its appearance. The water level and the salt formations change with the amount of precipitation and other environmental influences. And yet - it appears eternal.

Badwater, like many other places in Death Valley, doesn't have a hiking trail. One can simply take off in pretty much any desired direction, and walk for as far as the eye can see. (And if that's what you do, make sure to check the weather and take along plenty of water and sun protection!). People heading out onto the salt flat have trampled a wide trail that extends out from the parking lot into the salt flat, and most visitors go only as far as that beaten track goes. Being a bit short of time on the last couple of visits, we did the same.
Winter is when temperatures are comfortable enough to visit Death Valley. But even the hottest place in America can get very cold at time, as it was when I visited there with my friend last January.
A big advantage of visiting Death Valley right after the rains was that there was no haze. The air was crystal clear and the colors more intense.

After going far enough out on the Badwater Basin salt flat it is worth to turn around and look back at the mountains. Way up there, about a third way down from the top, there is a white sign. It looks very small from that distance.
That sign says, "Sea Level".
There are no flowers blooming on the salt flat, but the salt formations are as delicate and pretty. The evaporation process and the mix of minerals can result in some marvelous structures.
These structures are tiny. Kneeling down is a must to closely appreciate their beauty.
Each visit I see different formations. The interesting one below I saw in 2011 and not on later visits.
And in case I forgot what mineral is deposited there - it looks just like table salt. I admit I haven't tasted it, though.
The evaporation leaves behind not just the pure mineral structure but also these polygons of salt-mud. 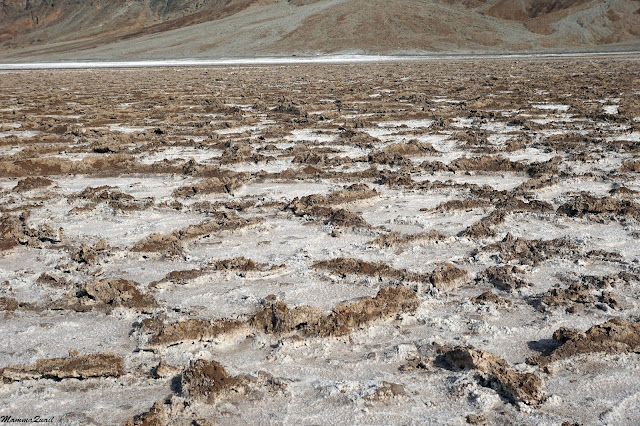 Every time rainstorms flood Badwater Basin a temporary lake forms, erases these formations and the salt dissolves. Then the water evaporates and the salt deposits once again. This cycle has been going on for thousands of years, since the last Ice Age. 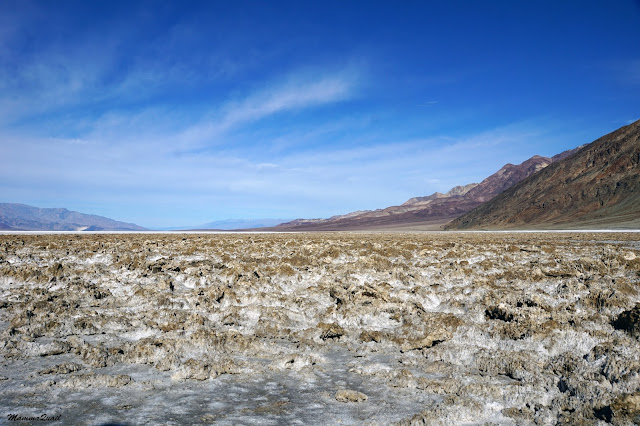 January 13 was a beautiful day in Death Valley, and we could have wandered in Badwater Basin all day long with no oppressive heat to chase us back to the air-conditioned vehicle. 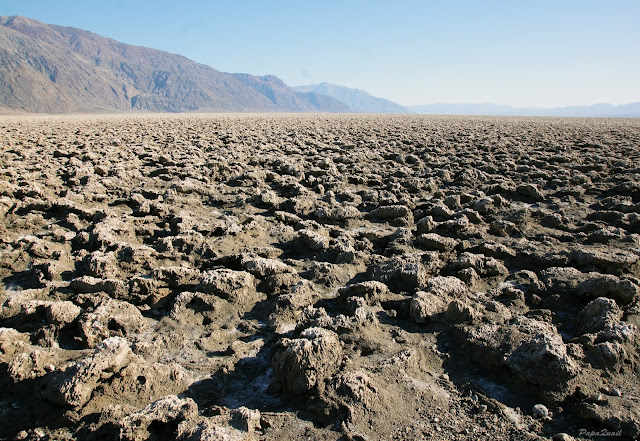 But the most important reason for visiting Death Valley at that time was still unchecked on my agenda: we were to go after the wildflowers. The photo below, taken on February 14 a bit south of the Badwater parking lot, shows the yellow field of desert sunflowers beyond the salt flat. That would be our next stop. 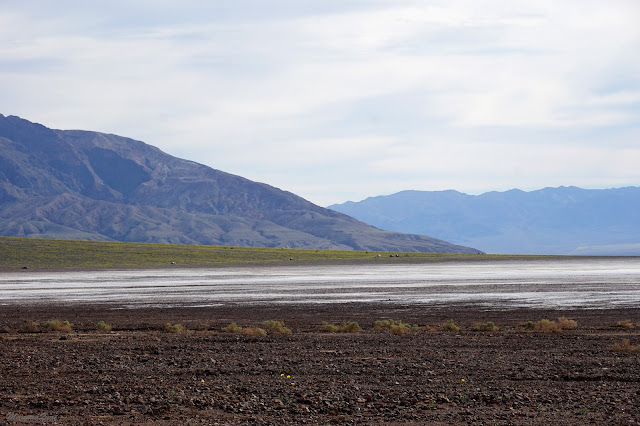 On our way back I stopped the car a bit north of Badwater to check closely a spot of greenery that looked promising. Above the vegetation, the rocks displayed some very pretty colors too. 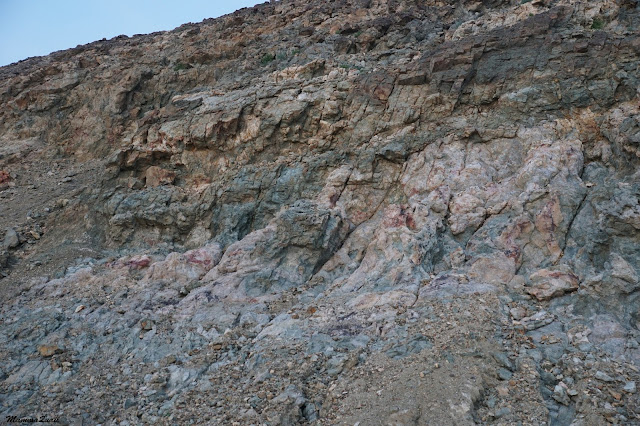 The patch of greenery delivered on its promise: a few lush daisy shrubs were showing color.

Hidden between the daisies were tiny cryptantha flowers. They were numerous, but I almost missed them. Has I not stopped for the daisies I would probably have missed them altogether.
After checking out Badwater and checking off the beginning of the superbloom year my friend and I continued north to Ubehebe Crater, which would be our final destination for that day.