Downstream Pine Creek: From the Basin to the Trailhead

Our last morning at the South Warner Wilderness was slow and easy. We all slept well for a change, and took our time eating breakfast and breaking camp. We left our shoes off because the first thing we needed to do after hoisting our backpacks was fording Pine Creek. (Brrrr, cold water!).
On the other side of the creek we took our time to take a good, long goodbye from Pine Creek Basin. We did promise ourselves to go back to this wilderness one day and make it all the way to Patterson Lake, but likely we'd come in from the Summit Trailhead next time. 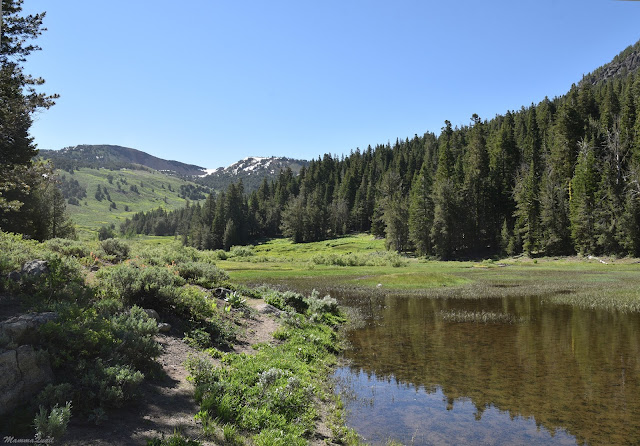 It was also time to say goodbye to one of the nicest plants I found at the basin - the Brown's peony. Only two days have passed since I saw it on our way up and now there were no more peony flowers to be seen. They all went to fruit.
We lingered there for a while before finally starting down the trail that will take us out of the wilderness. It was a bright sunny day, and we were plunging into the shade of forest.
In the forest - the gooseberry bloomed still. I have seen these on our way up three on the first day of our trip.
But now that I wasn't pushing to go uphill I also seen undergrowth flowers that I have overlooked before.
Pappa Quail too finally got to see the pond with the waterfall that he had missed on our way up. With his birding lens he got a nice zoomed image of the waterfall. 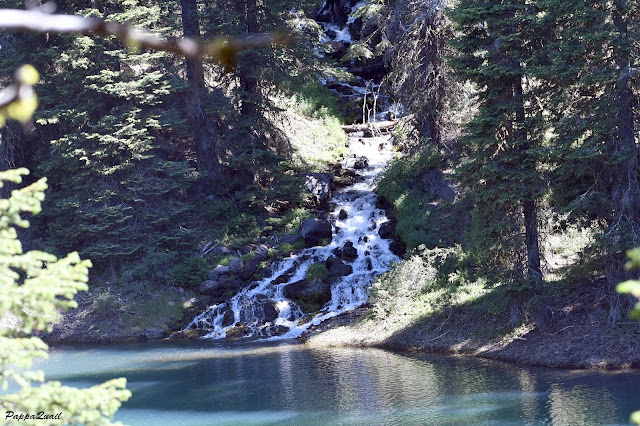 We wend down at a fast pace but stopped frequently to admire the sights we've seen. The chikas pointed things out to me left and right.
For a good portion of the trail we walked near Pine Creek right at the edge of the forest bordering small meadows and creek wetlands. While the lower, wetter areas were gown with corn lilies and monkey flowers, the slightly higher and drier grounds were covered with other plants. In this case - a lovely patch of mountain mule ears.
Pappa Quail who was at the lead most of the time got to see a big buck at the edge of one of these meadows. By the time I caught up with him the buck had already hopped off.
I consoled myself with the pretty wildflowers and the many insects that were busy about them.
Pappa Quail too was fascinated by the butterflies. There were many of them, of many species. This swallowtail was focused on the larkspur that were growing there in a nice, thick patch.
The forest wasn't very dense but the pines, small and thin as they were, looked healthy. It was good to  hike in a healthy coniferous forest for a change. I hope that the boring beetle doesn't get there and damage the Modoc as it did the Sierra Nevada forests.
Enough sunlight penetrated the forest canopy to support a nice undergrowth. Many of these plants were blooming. Some I have never seen before.
Many of these forest undergrowth blossoms were not big and bright as the meadow flowers, and I passed over most of them on our way up two days before. On our way down, however, I took the time to look at them more closely and found that they had a delicate beauty that's worth noticing and noting.
When we took a break, sitting down to rest and eat a snack, I had the time to take some macro images of the smaller of these undergrowth blossoms. This way I can appreciate the details of these tiny flowers when looking at the enlarged pictures on my computer screen, something I cannot do in real time during the hike. (Not when I don't carry a magnifying lens with me).
We went on and in a short time were out in an open meadow once again. The meadow has its tiny resident flowers as well.
Out in the sunshine again and surrounded by butterflies, I noticed another beautiful winged creature - a pretty dragonfly poised atop a cornlily plant. 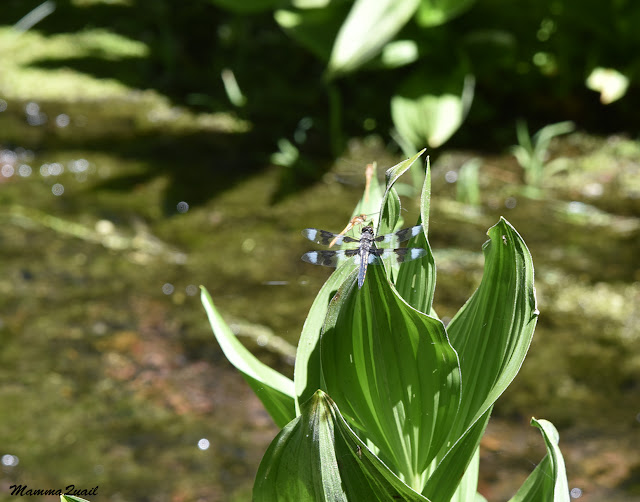 On the distant bank of the creek I saw the same line of bog orchids I had photographed plenty of on the way up. This time, however, I was after the swallowtail :-)
We kept going at a quick pace all the way down. Once again I found myself in the rear, pausing now and then to enjoy the wildflowers and the forest as a whole.
Pappa Quail too had stopped, at least once :-)
But in short, we made it back to the trailhead fairly quickly. It wasn't even noontime when we reached our car.
At the end of our previous family backpacking trip to Manzana Creek we pretty much collapsed into the cr. This time, however, we arrived with much energy still. We took the time to change shoes and rearrange our gear and pack it nicely in the car before finally saying goodby to the South Warner Wilderness.
Not to far from us was a large van and a few people getting ready to hike in with a bunch of forestry work tools. They were National Forest trail maintenance crew, all volunteers, that were going in to clear the trail from obstacles. We told them about the snow block up by Patterson Lake and I hope they managed to get our bottles and hiking poles that we had lost during our snow bypassing ordeal.
Modoc County is a full day's drive from the Bay Area and we don't know when our next trip there will be. Since we had exited the wilderness a day earlier than we had planned we decided to stay in Alturas one more day and go look for wildlife (especially the feathered kind) at the Modoc National Wildlife Refuge. There is much to see in that remote end of California. It is very beautiful and unique there, and not very many people travel there. On our entire trip we came across very few people, all of them local or have been local at some point in their past. The South Warner Wilderness is a pristine wilderness gem that we were fortunate to find and are sure to go back there to explore further.