The Balconies of The Pinnacles National Park

Since we moved to California I had visited the Pinnacles National Monument several times. Recently, though, it has been promoted to a National Park. Last August, en-route to our revisit of the Channel Island NP with Grandma Quail, we had the chance to stop on the way and show her the latest addition to the glowing list of California National Parks.
Visiting the Pinnacles in the height of summer isn't necessarily the wisest of ideas. Nestled in a mountain range once removed from the coast, it can get very, very hot there. Still, we went there and yes, it was very hot :-)
The park is named after the massive rock jags that are the remains of an inactive volcano, which was split in half and moved to its current position by the San Andreas Fault. These pinnacles of rock can be seen briefly from Hwy 101, but otherwise they are hidden in the mountain range.
Not quite the desert, The Pinnacles is fairly dry. By mid-August the annual plants were all brown and the bushes displayed a variety of colors ranging from rusty to dark green. The trees there are far apart  and each of them stands out in character.
Coming from the west and not planning to stay, we chose to hike the caves and balconies loop trail.
After walking for half a mile under the sun we entered boulder area. The creek narrowed into a canyon and the trail went over and between some very large boulders, many of which were decorated with colorful lichen growth:
When we got to the loop we took the right trail, leading directly into and down the caves.
These caves are not curved inside the rock. They were created when massive boulders fell on top of the canyon, roofing it. Except for the occasional skylight opening it is dark inside, and the trail can be tricky and slippery. 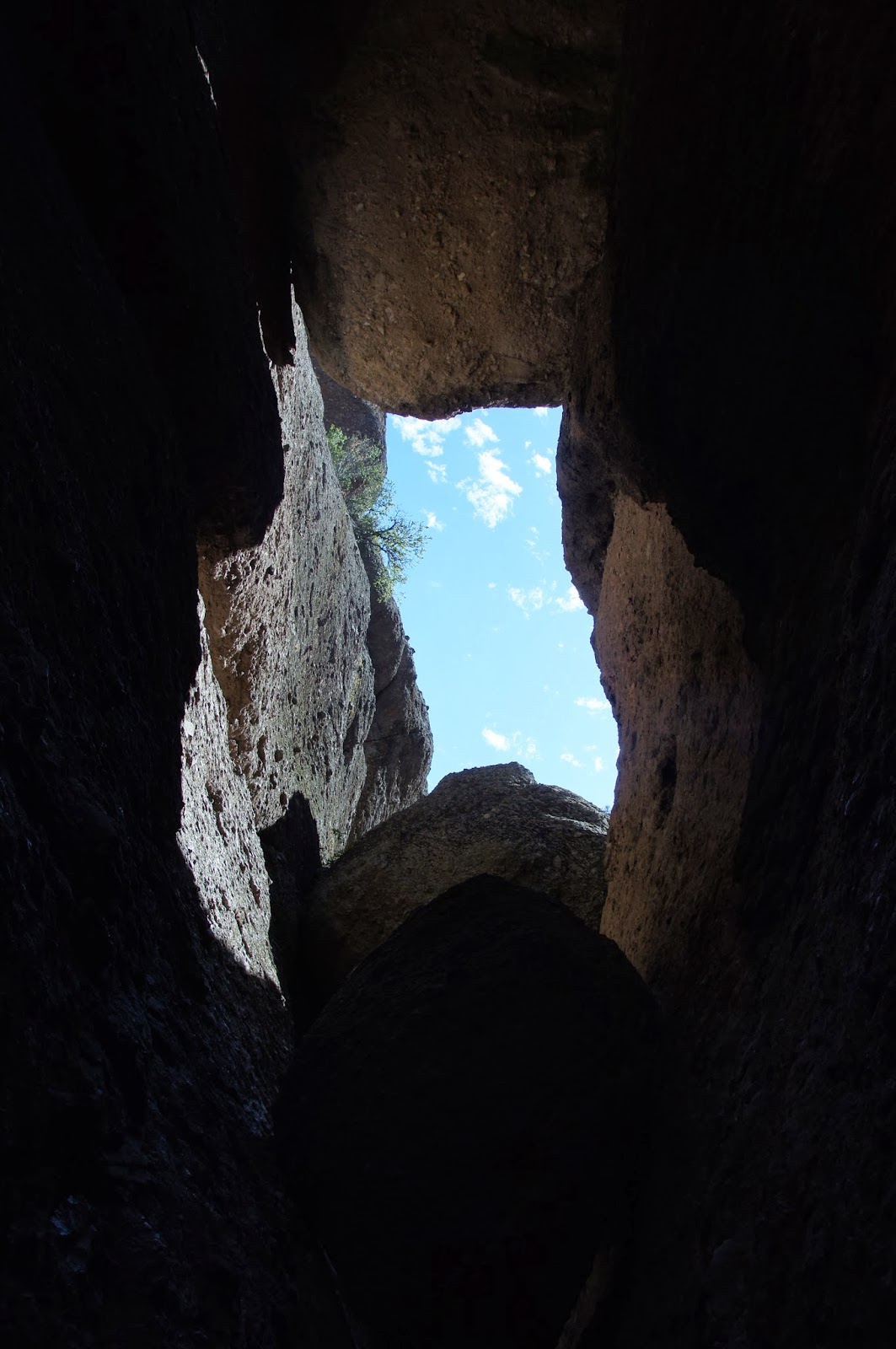 We took our time to carefully climb the narrow, dark trail.
Waiting for us, after emerging from the cave, were pretty red flowers that grew at the bottom of the stairs.
The Hummingbird Trumpet wasn't the only red color there. The Poison Oak can get quite red too.
Very few plants were blooming at the time. And even those that did, were at the very end of it. Like this broomrape, a parasitic plant that instead of photosynthesizing, lives on and off roots of nearby plants.
There were many of the cushion-like bushes of the Eastern Mojave Buckwheat, some were even blooming still:
But most already wore the rusty-brown after bloom colors:
It was very hot and we stopped to rest for a while in the shade. The Clematis stayed in the sun and the light shone through its fluffy seed feathers. They looked like little cotton-ball clouds.
After going through the caves and up the stairs we turned left and up to the Balconies Cliff Trail. The Balconies are the cliff levels of the mountain to the west. They tower pretty high over the canyon. 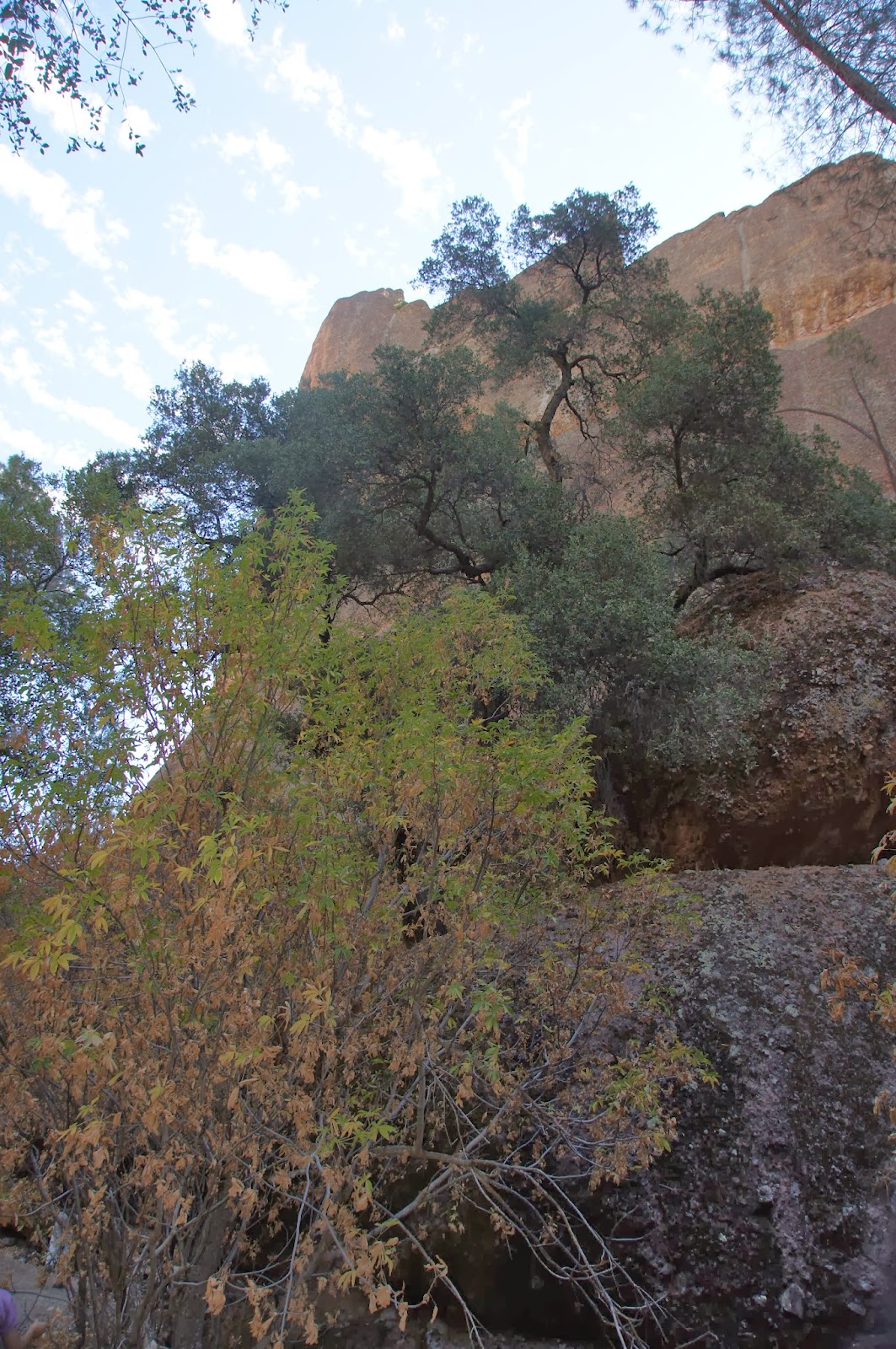 The trail doesn't go all the way up there. Just along the lower balcony.
Up there, just before going round the curve back south, I glances north to the valley beyond the canyon. It was the closest thing to a forest that we saw that day. 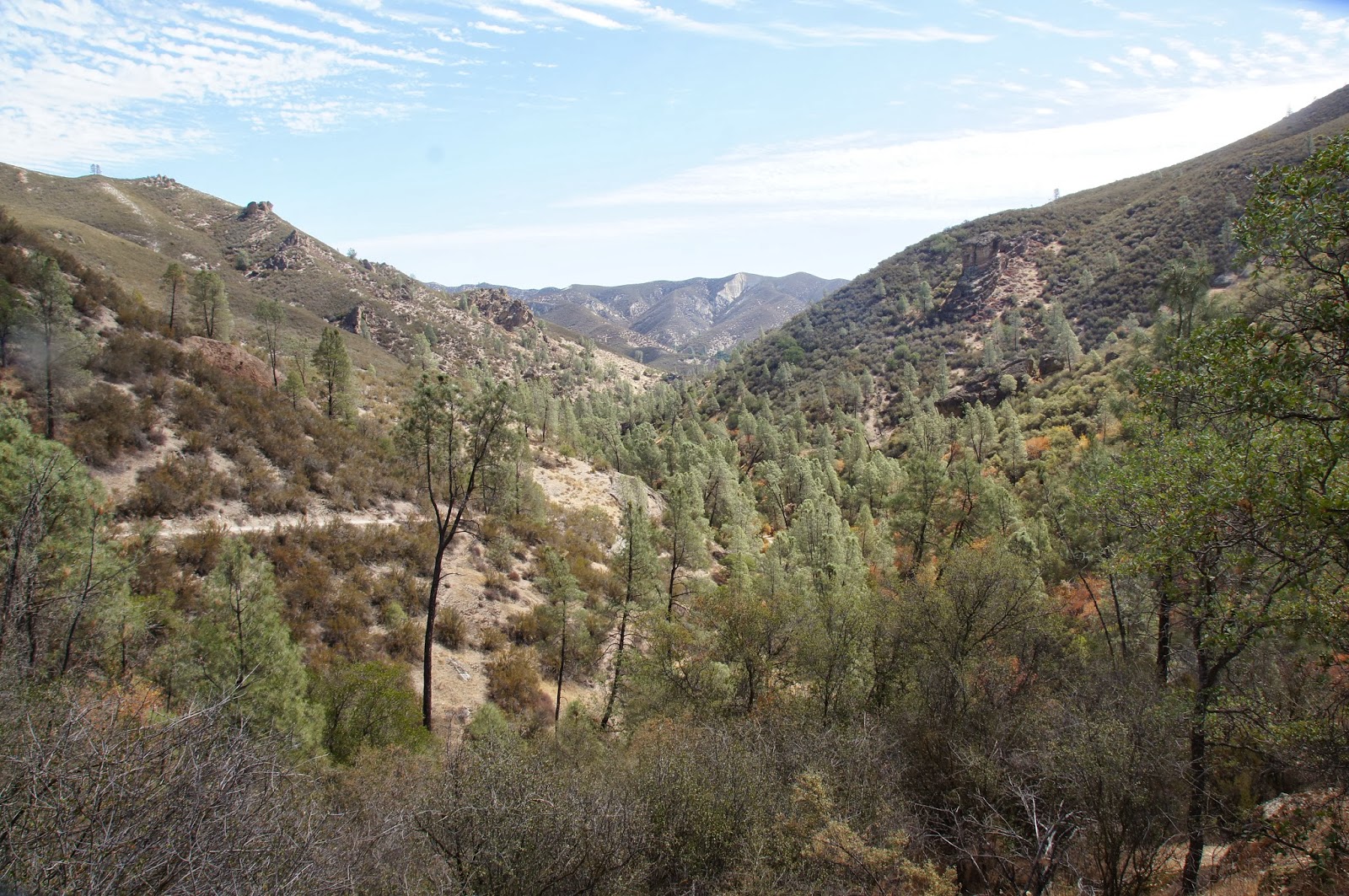 As we walked along the lower balcony I noticed the dark, vertical lines in the rock: the marks of seasonal water flow.
Looking at the map now, I noticed for the first time that many of these pinnacles have been named. I wish I could remember which ones are these. Regardless of their name, they are all unique and awe-inspiring. And yes, people do go there to climb them. (But not in the middle of August, apparently.)
After almost a mile of walking along the balcony, the trail descends back into the canyon, some distance before the entrance to the caves.
The reason the place was upgraded from a National Monument to a National Park is that this place was chosen as one of the sites to re-introduce the almost extinct California Condor. We have seen them there in previous visits, and were hoping to see them again on this one too.
But the condors were someplace else that day. We did get to see other birds, though. Little, evasive, and noisy. Good thing Papa Quail has patience for them.
Nothing as exciting as a bobcat on that hike for us. Just a cute little chipmunk. They always make me smile.
Back near he parking lot I took the time to photograph a member of the tarweed family that really caught my attention in our SoCal trip. I like the way the disc florets stick out like eyes from between the ray florets.
Despite the heat, we had a very nice hike at the Pinnacles. From there we continued south to spend the night in Ventura, where on the morrow we would embark on our cruise to Santa Cruz Island. About a week later we would come all around and return to the Pinnacles from the east on our way back home. 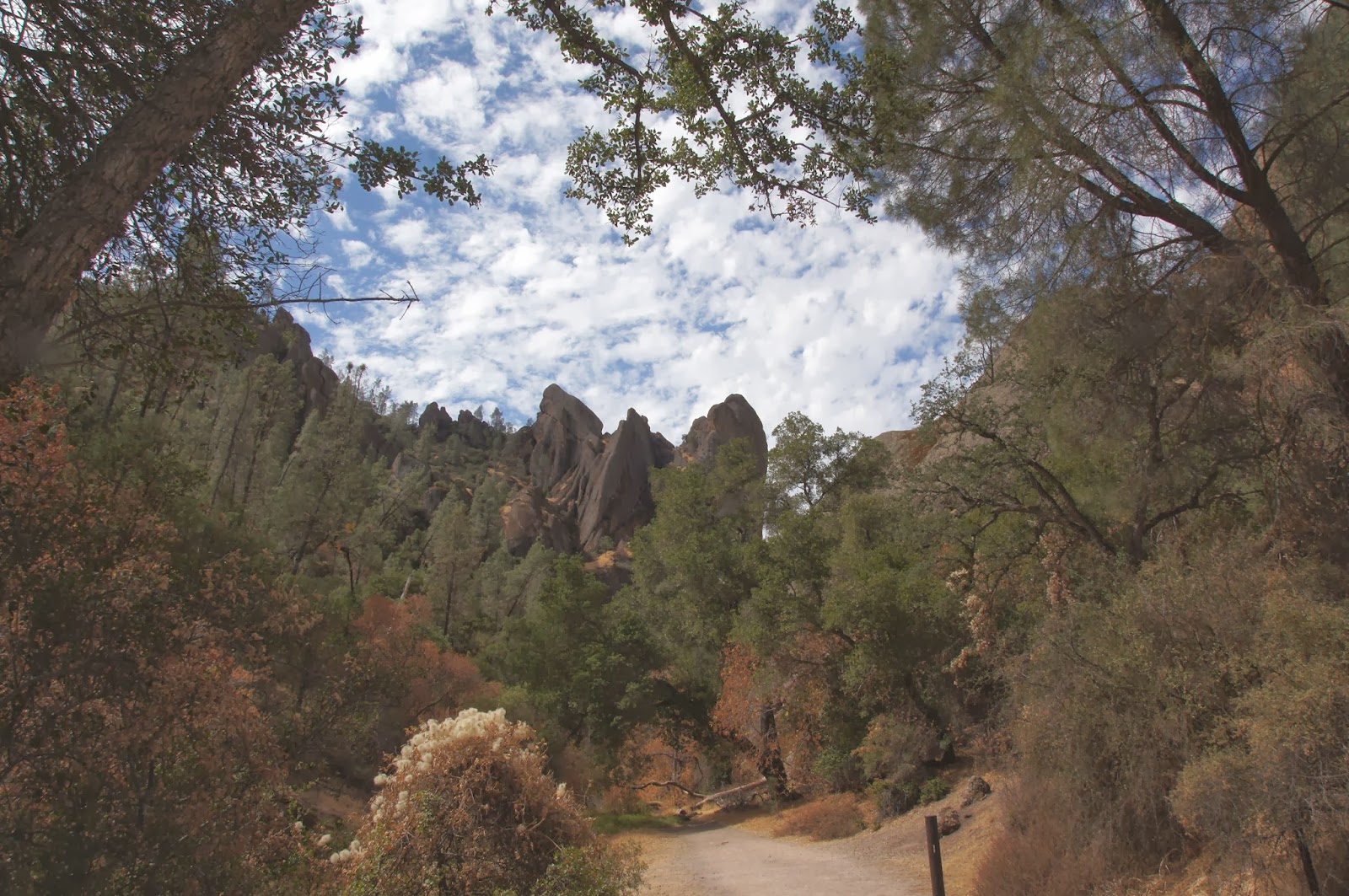