Way back when during the California Gold Rush, a group of miners sent a hunter out to the forest and he returned empty-handed but with fantastic news: he had discovered a grove of giant trees, bigger than anything within human knowledge until then. The miners dismiss his story as fibs and send him off again. On his second return he tells them he had shot a bear and asks for help carrying the carcass. A group of men goes along with him and he leads them to a grove of giant sequoia, the grove he had discovered on his first hunting trip. In this story's aftermath one bear goes unharmed while a miners go hungry a little longer.
And the biggest trees in the world, the biggest known organisms in fact, become known outside of the local Native American tribes of the Sierra Nevada mountain range.

The area in which giant sequoia trees were first seen by European-descent people is now part of the Calaveras Big Trees State Park. It is there that my chikas and I had hiked on Labor Day after breaking camp at the Spicer Reservoir.


I had promised the chikas a morning swim in the reservoir so we took our time in checking out of the campground. When we arrived eventually at Calaveras Big Trees SP I found that the park was overflowing with people and that the North Grove area was heavily congested with cars with no parking available within any reasonable time. I drove to the more distant South Grove area, where I did find parking. The grove, however, was too far for us to hike on the time we had before having to head out back home. So we went hiking on the shorter Beaver Creek/Bradley Grove loop trail, which proved to be just right for our time and ability, and for the hot weather that day.

We quickly descended the short trail to Beaver Creek crossing. That's where we saw the last of the people on our hike.
The creek bed was very colorful and pretty, and the water looked very inviting. A group of people sat by the water and the chikas wanted to join them but I urged them onward.
We started ascending up the hill. Near the creek the trees were mostly broad-leaf but the higher we hiked we saw more and more conifers, until they were the majority.
Some trees stood out with interesting appearance, like this one, with a bulging burl mid-trunk.
None of the plants were blooming. Calaveras Big Trees SP is at a lower elevation than Lake Alpine, where we had hike the day before. There it really was the end of summer. It felt that way too.
But fruit also add nice colors to the forest.
Getting close to Bradley Grove we came upon a sole Giant Sequoia. It wasn't as big as the trees we've seen at Yosemite's Mariposa Grove or at Sequoia National Park. Even so, that tree stood out above and beyond every tree around it.
My young tree huggers took turns trying to encircle the tree with their arms :-)
We continued walking further until we reached a small clearing and a sign saying 'Bradley Grove'. We were there, but where were the giants?
There were plenty of trees, all right, some very large new too, but none were giant. After a fews dumbfounded seconds I realized that this was a young grove: they were giant sequoia 'babies'. In a thousand years or so some of these will indeed become giant.
I made myself a mental note to come back to this place in a thousand years, and we moved on.
A short dead-end trail splits off right at the point where there trail curves back toward Beaver Creek. That trail leads to another lone Giant Sequoia. I convinced the chikas that it was worth the extra walk and we had a nice, quiet rest stop under that gentle giant, silently revering it.

When the European-descent settlers found the giant sequoia they immediately set about lumbering them. Fortunately for these trees they make really bad lumber: unlike their cousin the Coastal Redwood, the Giant Sequoia wood is just too brittle for building anything bigger than matchsticks (apart from their own enormous trunks, of course).

These trees are very resilient. The high content of tannins in their wood, which gives them their beautiful orange-red color, also renders them immune to nearly anything that eats wood. (Not sure about that bug in the photo, though). The tannins are also fire-attenuants and Giant Sequoia can withstand most natural forest fires.
Giant Sequoia cones are quite small and can fit easily inside a child's hand.
A modest beginning for a giant :-)

On the way down to Beaver Creek we passed a grove Sugar Pine. I believe this species holds the record for biggest cone!
We saw more conifer trees along the way. I liked this pine with the three-way split top:

As we got closer to Beaver Creek we were once again surrounded by broad-leaf trees. While these trees were still wearing full green we could tell that fall was around the corner simply by looking at the ground: 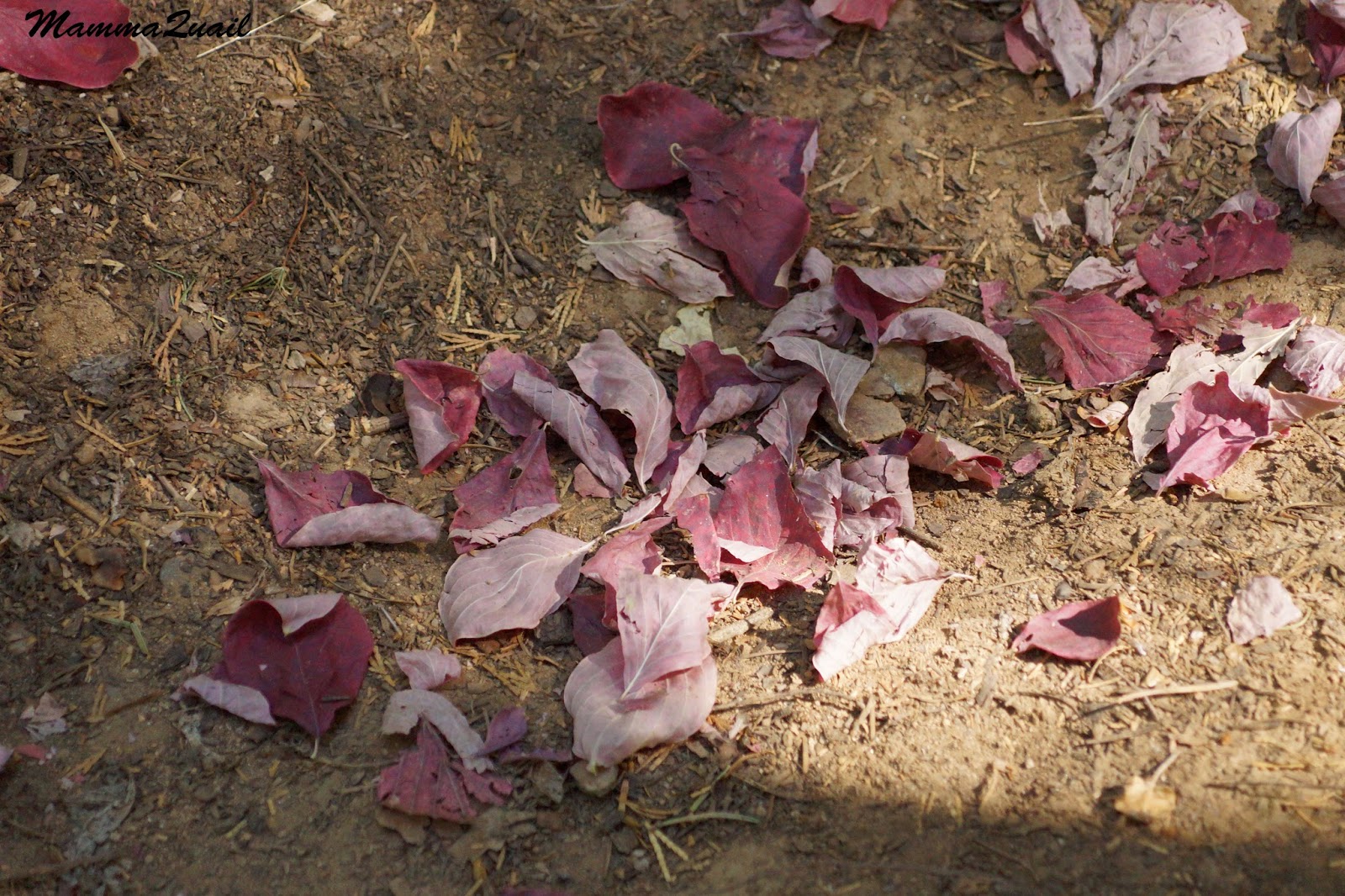 The last segment of our loop trail follows Beaver Creek. We stood there for a few seconds to appreciate the lazy flow. All too quickly though, a cloud of mosquitos descended upon us and, having no bug repellent to ward them off, we took our feet and run down the trail all the way to the bridge.
At the bridge I allowed the chikas a little creek time before we hiked up to the parking lot. They didn't want to leave the water and I couldn't blame them, but we still had a long drive ahead of us, and it was school night. I didn't have to argue, though. The words, 'gift shop' have intrinsic magic to them.
There were much fewer people at the North Grove area nearing the end of the day. At the visitor center I educated myself some more about this lovely park and I fully intend to return and explore it more in the near future. 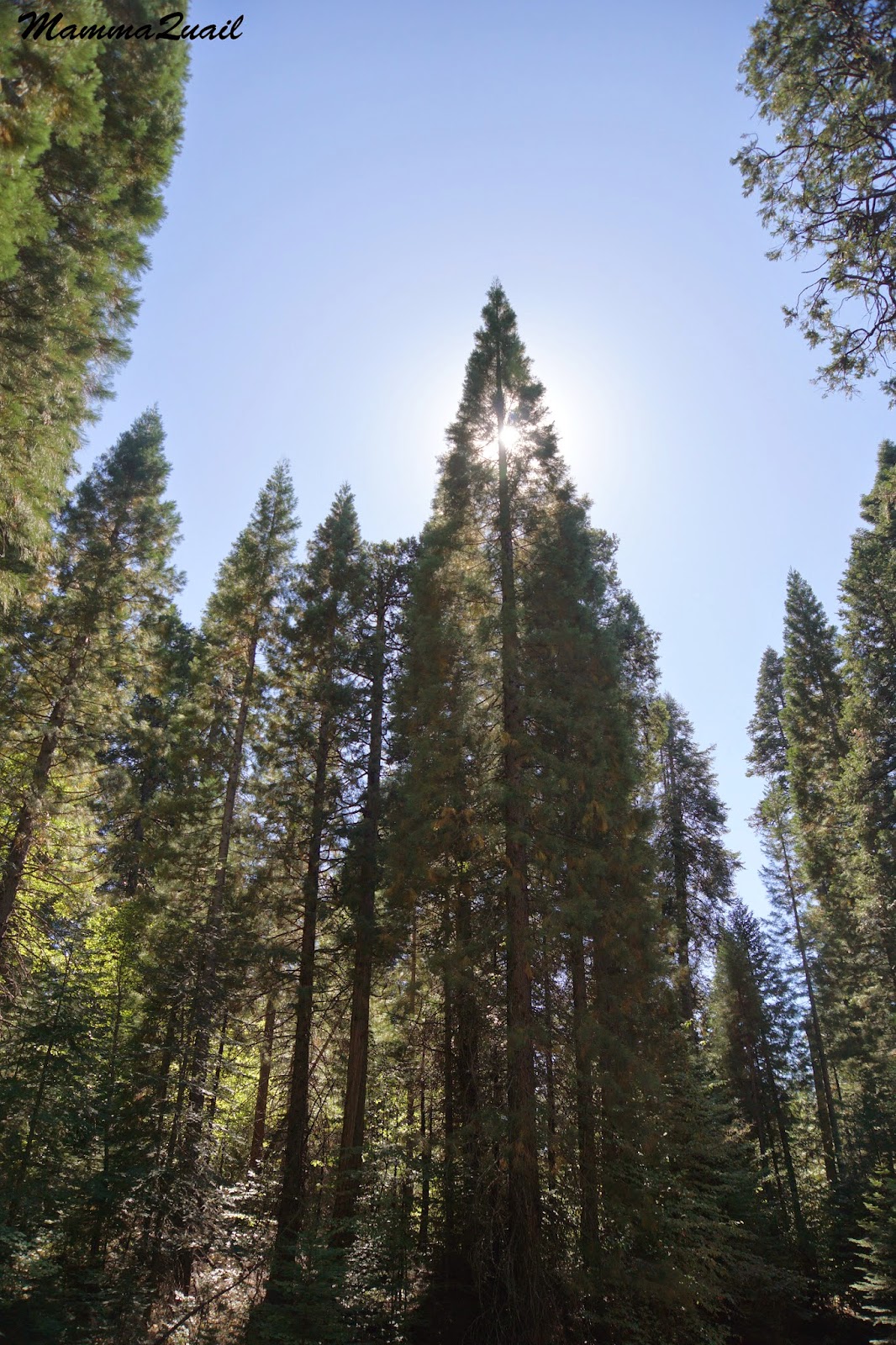