The Long Anticipated Hike at My Neighborhood Park 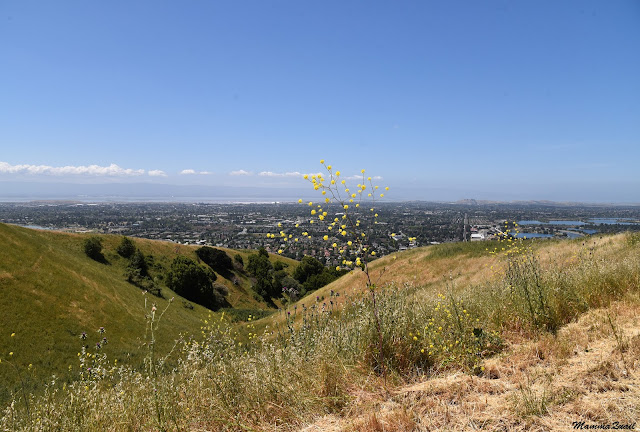 On a fine day in May of 2016 the East Bay Regional Park District opened the long-awaited Vargas Plateau Regional Park. On that very afternoon I was there with the Redwood 4-H Photography Project members, wandering near the Vargas Road staging area and snapping images of the beautiful sweeping views seen from the heights of the plateau. I made up my mind to go back there for a hike as soon as all my end of school year obligations were over. Alas! Just a few weeks later, by the time I could go hike at Vargas Plateau again, I found the gates shut, closed by a court order, until improvements were made to the access road to make it safe.
There followed a whole year of negotiations during which I saw the park's hills turn yellow and brown, then green once again, and scarred by several mud slides, and then burst into colorful bloom. (I live nearby so yes, I did see all of that). Then, just as the hills were fading back into yellow I was informed that the park was to be reopened on Monday, May 15.
I preempted that morning and a few minutes after dropping my chika in school I was by the Park's lower gate at Morrison Canyon Rd. There I run into a fellow parent from my chika's school who had planned to go up the hill too. Glad for each other's company we entered the park and started eagerly uphill.
It was a perfect day to go on an uphill hike because it was sunny and sry, but fairly cool. And it was early still. The sun was shining brightly and with early morning energy we sped across the bottom part of the trail which is of very mild grade, almost level. 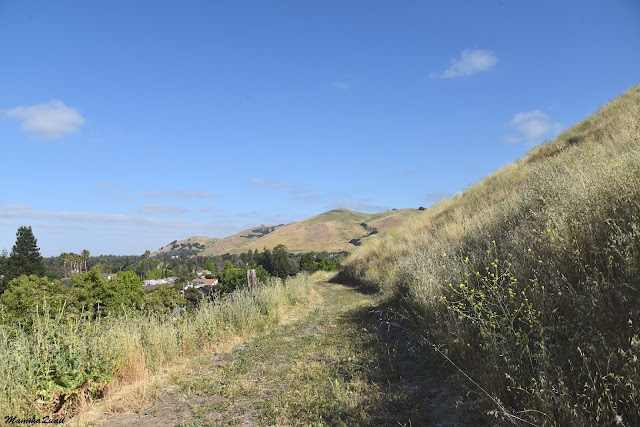 Right at the first turn, however, the trail bended sharply eastward and upward. Not slowing for a heartbeat, my companion rushed uphill. She had already informed me that she was in it for the exercise and I could keep up with her, but was too short of breath to talk.
With the exertion came the heat, stemming from my body and steaming from my skin, fogging my glasses and condensing on my eyebrows, dripping down my neck. I bas grateful for the short relief provided by a grove of oaks that shaded a bit of the trail.
We were gaining altitude quickly and my lungs were screaming murder but I didn't halt and I barely stopped to check out any wildflowers, of which I didn't see very many save for thistles. I did however snap some wide scenery shots of the views around, including the incredible view that unraveled below us. There, winding between the houses of the City of Fremont run the leveed Alameda Creek, flanked by the Shinn Pond and the Quarry Lakes and other ponds of the Alameda County Water District, all shining like sparkling jewels on the city's breast. In the background protruded the the remnants of the old Franciscan range that are now Coyote Hills. All this beauty now lay below me, fitting the palm of my hand.
We kept the fast pace all the way up to the heights of Vargas Plateau. There the trail leveled enough for us to resume our conversation. There also the view opened up all around: 360 degrees of vast, rolling hills of shimmering grass patched with dark groves of oaks all the way to the horizon. 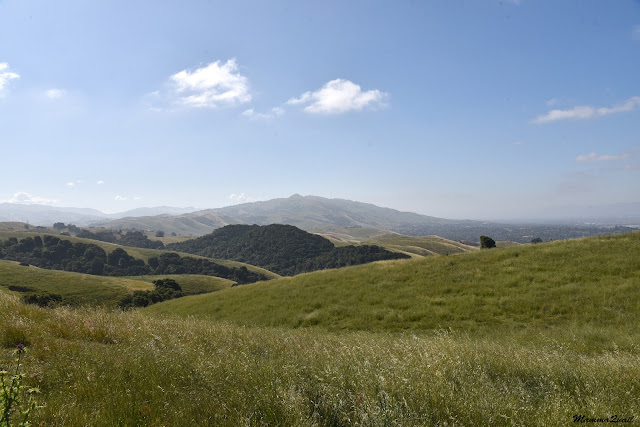 Up on top my companion finally slowed down and I too slowed down, taking in the views. Vargas Plateau, like most East Bay hills, is now cattle grounds. Brought here by the Spanish missionaries along with numerous mediterranean grasses and herbs, cattle had brought a complete and irreversible changed over these hills.
The former, native grasses that once covered these hills have not evolved with the aggressive type of grazing done by cattle, and were nearly completely destroyed. Nearly all grasses and herbs now growing on the hills are non-native, invasive species, well adapted to cattle grazing pressure.
The native grasses that used to cover these hills were perennials and the hills would remain green and lush throughout the year. The new settlers from the old world are nearly all annual species, rendering the hills yellow and fire-prone throughout the dry season. The primary natural hazard in California thesis days isn't earthquakes but wildfires. Here in the Bay Area fire hazard is the work of modern settlement.
At the top I escorted my companion to the upper Vargas Road Staging Area where we said goodby and she exited the park to go downhill along Morrison Canyon Rd.
I went back down the trail bit, then took the turn to the Higher Ranch Loop Trail.

The local wildlife had to adapt to the change, and many did so splendidly, like the California ground squirrel.
My hike around the loop was at a considerably slower pace than before. Now I took the time to enjoy the wildflowers that still dotted the late spring grassland.

The plant community change left many native California species still growing and blooming on the hills, including our state flower: the California Golden Poppy.
As I made my way north the view opened up to Niles Canyon, carved by the Alameda Creek and now a busy commute route linking Femont with Sunol and Pleasanton, and where the old Niles steam train still runs.
I was descending along the contour of the hill, keeping in mind that I will need to like all of it back up. This trail is meant to be part of the Bay Ridge Trail, and I assume that it will be about this place where it would eventually descend town to cross Niles Canyon and connect with the Pleasanton Ridge.
The little, mucky pond I passed on my way was the lowest point from which I started ascending once more. Again, I was grateful for the deep shade provided by the trees that grow on the north-facing slope of the hill. This time by old and venerable laurel trees. 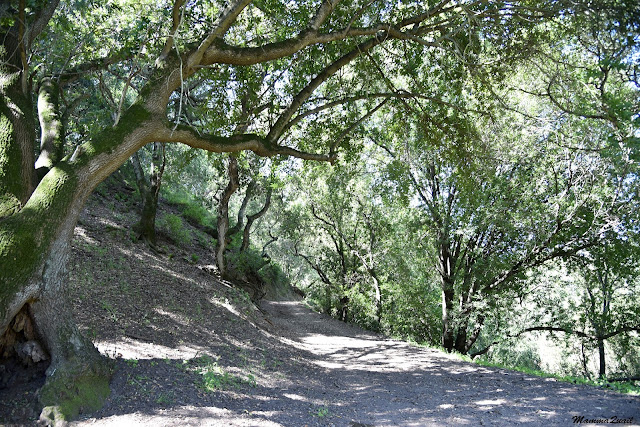 All too soon I was out of the shade again, going uphill under the direct noon sun. I excused my frequent stops by checking out the wildflowers, which bloomed in much greater numbers on this side of the hill.
Keeping in mind that I had a thing or two to do still before picking up my chikas from school, I huffed and puffed uphill without further stops. By that time my legs were already complaining hard. 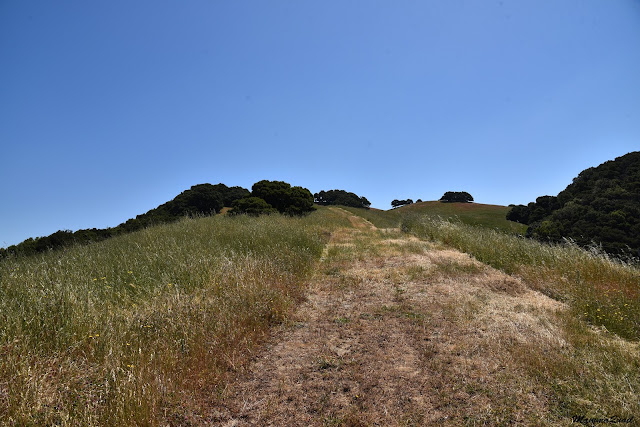 Near completing the Higher Ranch Loop I turned aside to the view point labeled on the map. From there I could see the bay below with the cities aligned along its shores, but I was less focused on the view on more interested with the killdeers that stood by the edge of the gravel flat of the view point. The killdeer blended so well in the background that I wouldn't have noticed them at all if not for their sharp, thrill calls, and their nervous, jittery motion on the line between gravel and grass. It is possible these were a nesting couple, but I didn't get closer to check if that was the case. 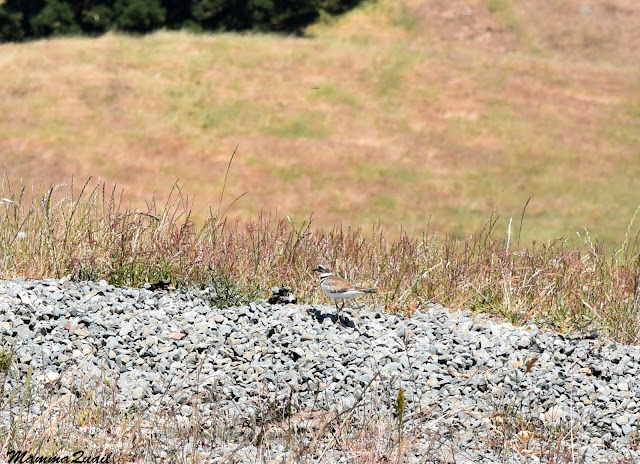 More interesting to me was the view southeast toward Sunol and beyond. I wish the air was clearer but that too would probably never get much better, now with all the industrial air pollution. 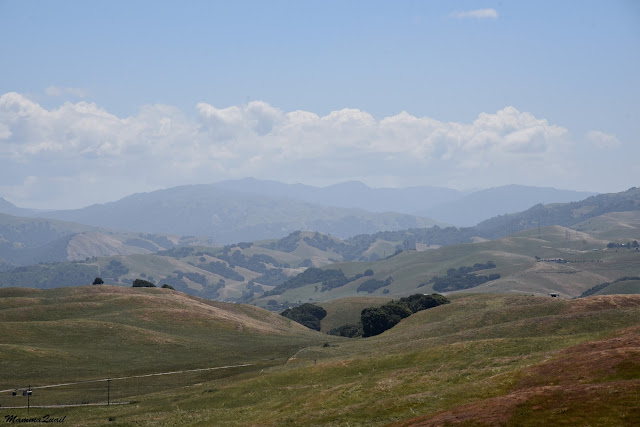 As I made my way down from the view point, completing the loop I noticed a somewhat yellowish gray bird on the wire fence along that part of the trail. I pondered weather to bother photographing it (it was quite far and I had only the wide angle lens with me). As I raised my camera to the bird there flew in another one - a bright yellow bird - and attacked the bird that was sitting there. The two birds had a violent and very noisy fight that lasted a few seconds. Then the intense yellow bird flew off, followed a few seconds after by the grayer one. I photographed the fight but the distance and unsuitable lens yielded only a few blurry shots. Enough, however, for my elder chika to later identify the birds: a female and male of Bullock's Oriole.
Below is a cropped image of these birds in mid-fight: the female is hanging from the top wire by the legs, pecking the leg of the male, and the male flapping upside-down under the female, pulling her wing with his beak.
The red-winged blackbird I saw a little later standing on the park's trail sign was a bit more generous, allowing me to approach closer before flying away.
I reconnected with the Deer Gulch Trail, and started downhill back to the Morrison Canyon gate. If my uphill hike was unusually fast, my downhill pace was now unusually slow. My legs were aching badly and I eased heavily on my poles, more waddling than walking. I badly wanted to sit down and rest but I feared that I won't be able to get back on my feet again, so I waddled onward, letting gravity pull me down and my poles stop me from rolling down.
Now, f course, every little thing became a huge interest and a perfect reason to stop. Especially wildflowers.
I even paid close attention to the tiny pink flowers that grew underfoot on the trail itself. I stooped over them, not wanting to kneel down (and having to rise up from kneeling).
Now that the sun has changed its position I had a better, clearer view of Mission Peak and its green slopes that from the distance looked milder than they actually are.
If on my way up I had to turn my head to look at the view of the Bay, now it was in my vision all the time of my descent. As I lost altitude the tiny houses grew larger and I could even see the children in my chika's school running around during lunch recess, and even hear their shouts carried up the hill toward me. Below, to the south, I saw Lake Elizabeth, one of my regular haunts, looking so small.
A patch of color on the opposite slop round one of the trail curves caught my eye. They were all invasive species: wild radish, mustard, and milk thistle, but it was still nice to see a wildflower carpet, even so late in season. 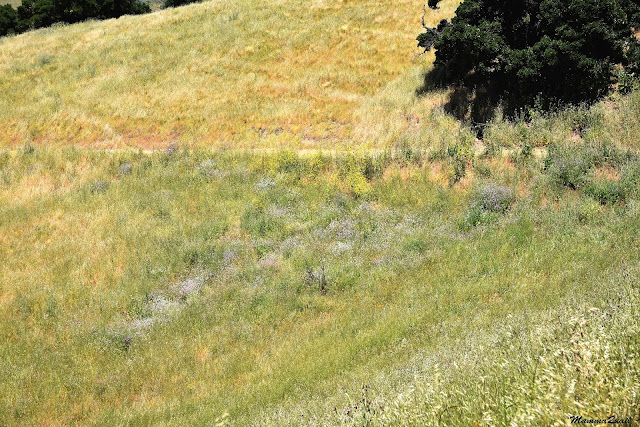 Although mostly gone to seeds, many local lupines were still blooming too, hidden in the tall, drying grass.
On the western slope of the hills, well below the oak groves and completely alone grows a single oak tree. This oak stands out when seen from below, like a special landmark. At the end of the recent drought the oak looked withered and I worried that it might not have prevailed. Now, as I was walking past it on the trail I noted that it alive and well, and that made me very happy. 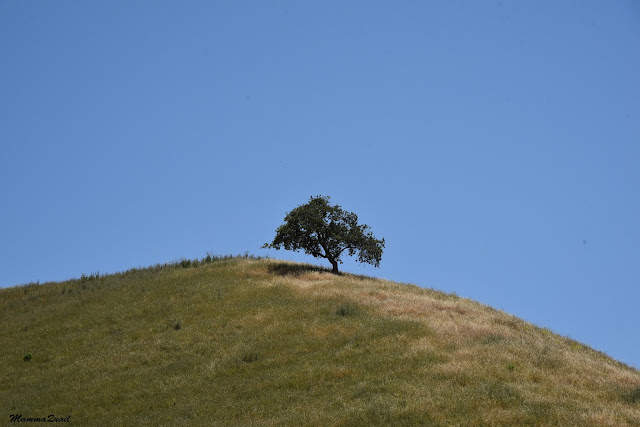 I made it to the lower, flatter part of the trail and my legs were shaking. It occurred to me that all that hike I not once did I take a sitting break. It was too late for that now, with less than half a mile left, so I trudged along with small, painful steps. 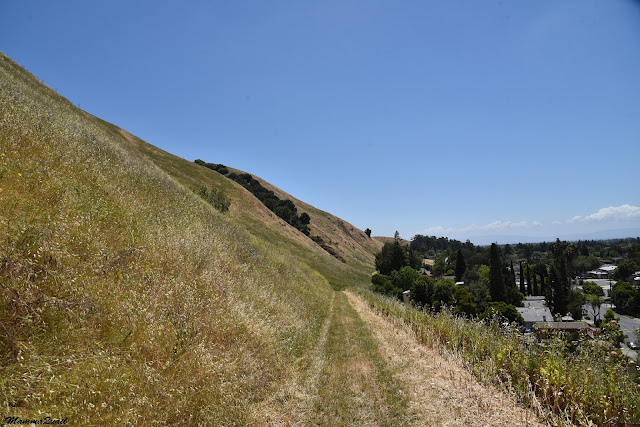 The lower entrance is but a short walk from my home, but it felt like many miles. After passing the doorstep I removed my shoes and collapsed on my bed. Surprisingly, a short 10 minutes rest revived me almost completely and after washing my salty face I was all back to my normal self.

It's so nice to have such a beautiful park so close to home. Now I only hope that Vargas Plateau Regional Park will remain open.