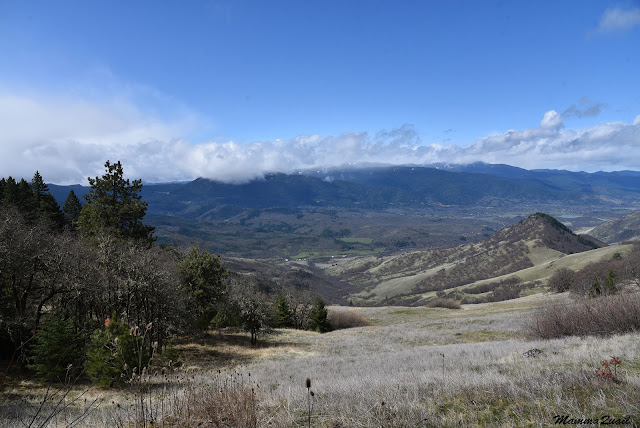 On April 7, the last day of the Oregon bit of our 2018 spring break trip the rain was finally over. After spending the last couple of days walking between the droplets or hiding underground we were finally able to go hiking with our cameras out of cover. Our original plan was to head back to California that morning and hike in the Shasta area but we decided to take the opportunity and spend one more day in Oregon before going back south. So after checking out framer hotel in Ashland we headed back to the Siskiyou-Cascade National Monument, hoping to get a more serious impression of that area.
I followed the online instructions to the Green Springs Mountain Loop Trailhead.

At the described spot was a small parking area but the trailhead itself was a short walk away down the dirt road. This had caused us some confusion, but we walked in the expected direction and eventually found the place where the trail splits off from the road. 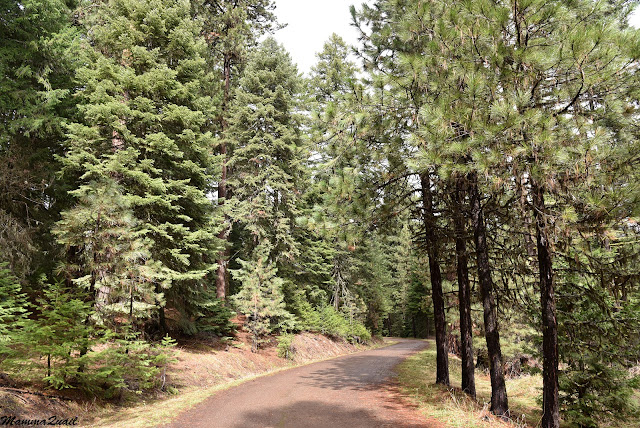 That part of the trail overlaps with the Pacific Crest Trail (PCT). We had met it four days before at Seiad Valley and two days before at Hobart Bluff, so for the third time this trip we got to walk a bit of that long scenic multi-state trail.
And we almost didn't - the beginning of this trail was covered by a large snow patch. After traversing it we found that the rest f the loop trail was clear of snow. 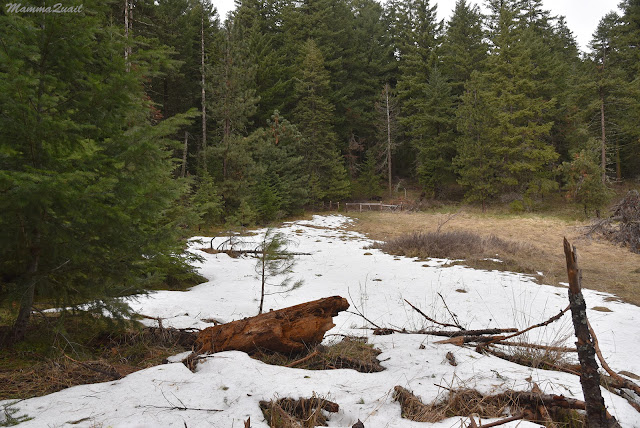 There was no more snow after that first patch we've seen but the trail was wet and muddy. The scenery was that of a very early spring - the snow has melted but only the very beginning of plant growth could be seen. 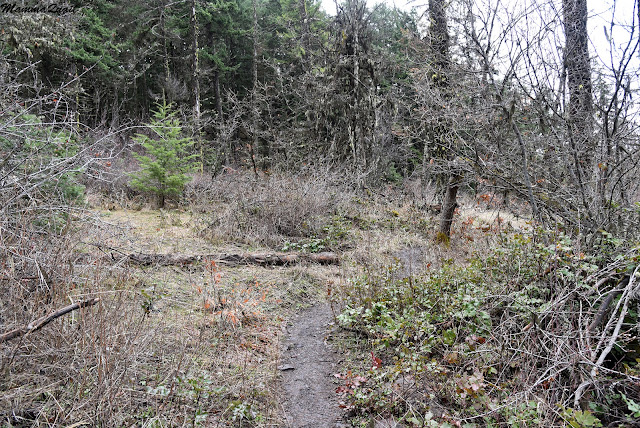 Of the plants that did green up quickly I found the now familiar snow queen. A true ephemeral.
For the first part of the loop we were walking through a gloomy conifer forest. perhaps it wasn't raining but the clouds were reluctant to leave so we walked through interchanging spells of sunshine and overcast grayness. 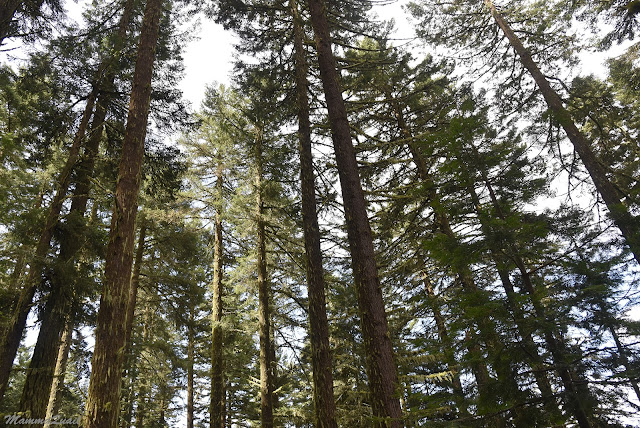 Then the trail split from the PCT, curved left and broke out of the woods. We were now walking along a mild slope of open grassy area. 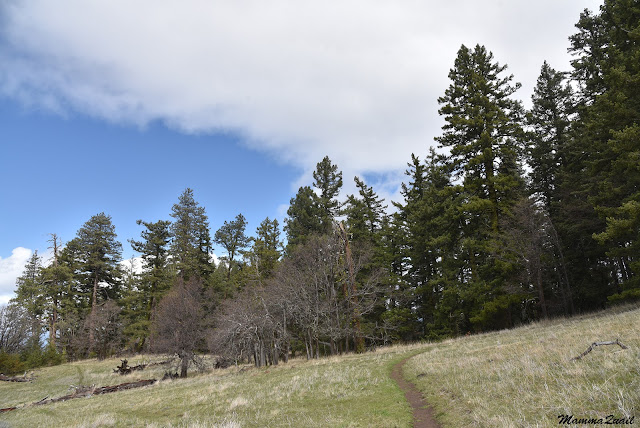 And finally - we had view. A vast, gorgeous view of the valley and mountains across the deep valley below. 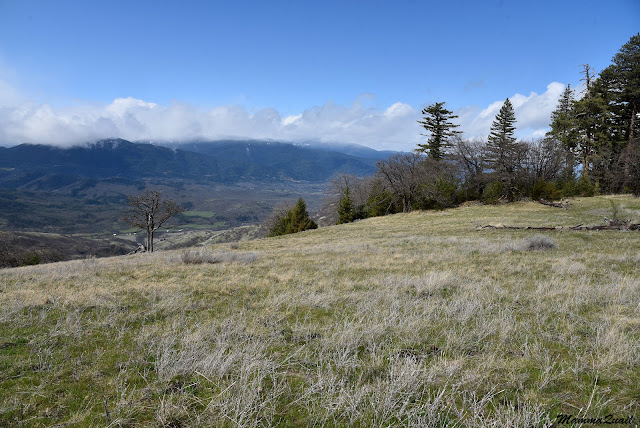 The clouds were still hanging low around the mountain tops. Perhaps there it was raining still. 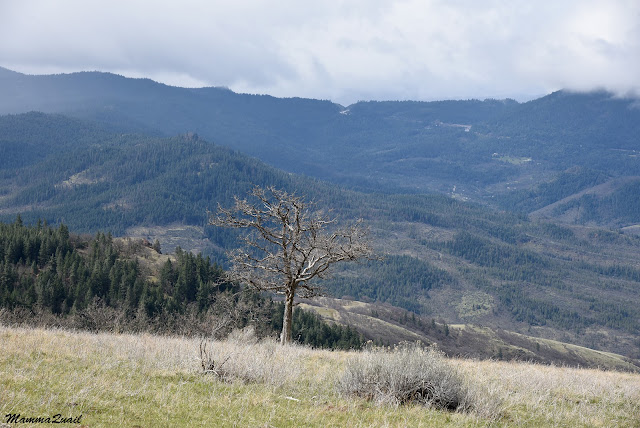 It would have been the perfect place to have a break and sit down to enjoy the spectacular view but it was actually pretty cold and windy on that exposed mountainside. Moreover - the ground all around us was soaking wet. There was no place where we could sit comfortably without wetting our behinds.
From a distance the slope looked grayish yellow of last year's grass, but in between the dry grass new, green blades were growing thick. And there I made another discovery - a wild parsley blooming! 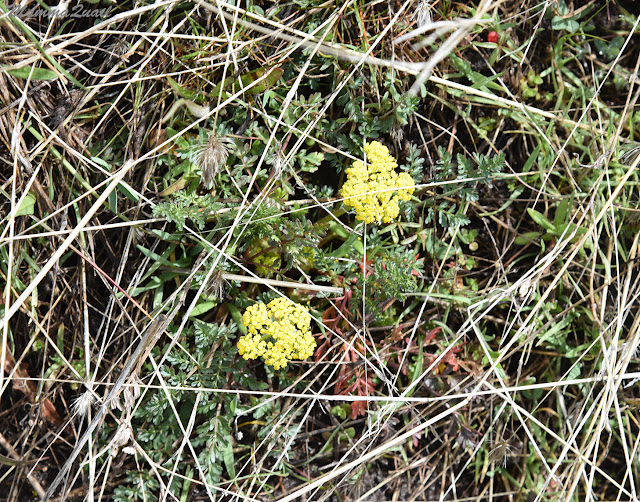 The soil was very wet but the trail itself was downright muddy. We walked slowly, taking care not to slip and fall. 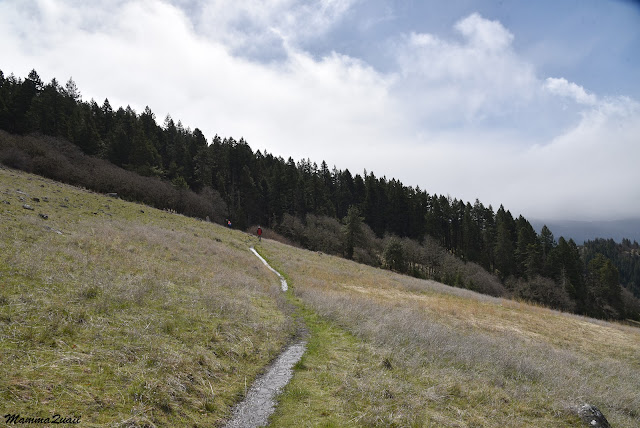 Pappa Quail and the chikas marched ahead but I lingered behind, taking my time to enjoy the wild sights that unraveled before me as the clouds retreated. 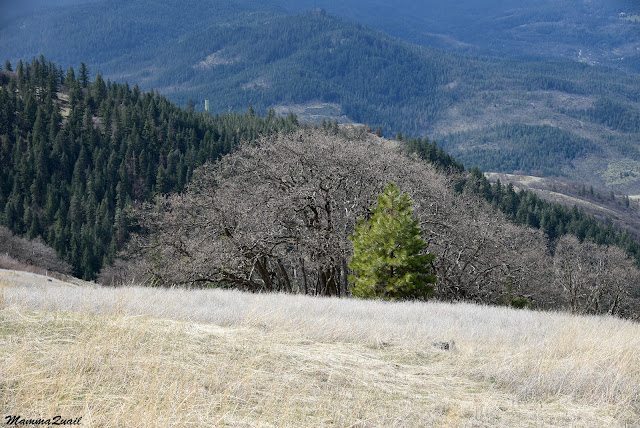 A small group of red bushes grabbed my attention. They were too far for me to identify what they were, nor to tell if the red colors is from new or old foliage. I assume new because of the season. I didn't think it was bloom. I liked the nice spot of red color in the otherwise mellow grayish-green backdrop. 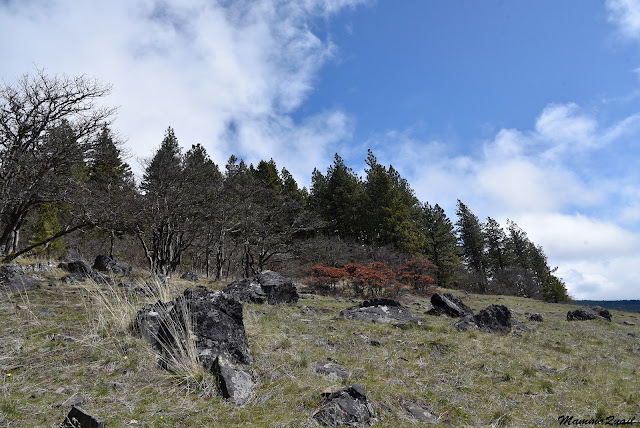 The trail curved around the mountain, going through small patches of trees and back out in the open again. The clouds retreated more and clung to the mountains. 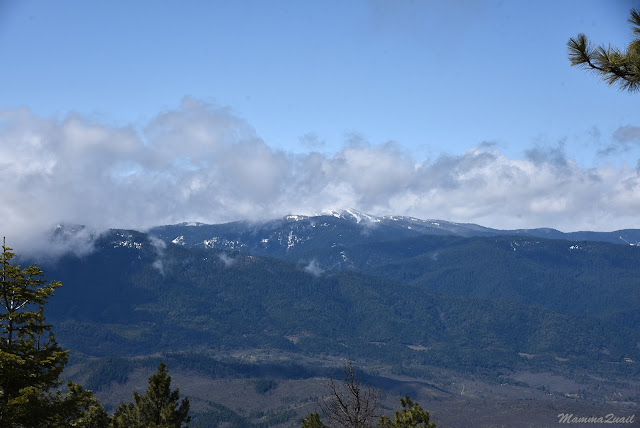 Then the chikas made and exciting discovery - they found a larkspur! They called me to hurry up to where they were (as if the flower would run away any moment ...). The plant was very small and it was the only one of its kind there. It's flowers were large and impressive.
The trail kept curving left and now we were walking east, looking at different mountains and the spread of the Siskiyou-Cascade National Monument. I could feel the appeal of this place and the reason this area became a National Monument. 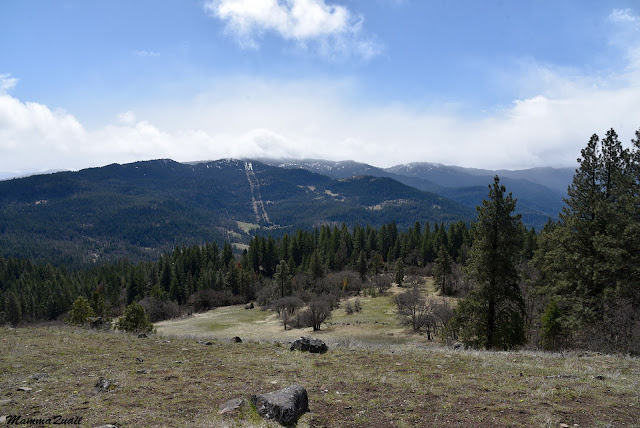 The trail entered the woods again and the view disappeared behind the trees - tall and thin, lichen-covered conifers with low-hanging boughs. 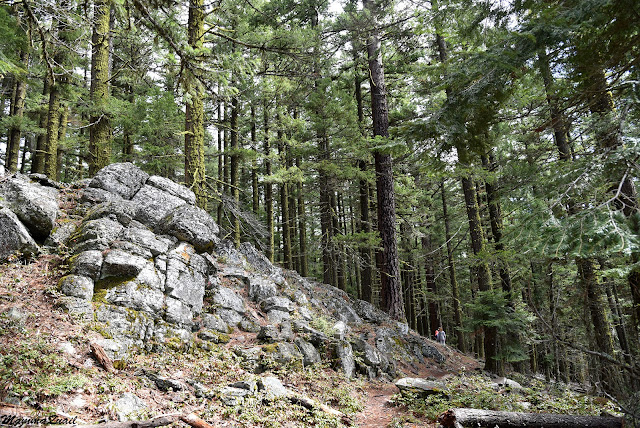 Smaller trees filled what seemed to have been a forest clearing. I didn't see any evidence of fire there. I wonder if that are used to be a meadow before, or was it cleared by people in an earlier time (there were no obvious stumps either). 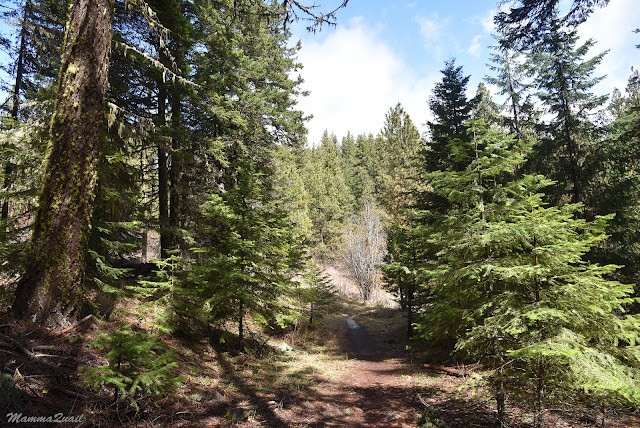 When we completed the hike I was satisfied with the impression I got of the Siskiyou-Cascade. I'd love to be there again, probably later in spring to catch the flowering season.

It was easy in the afternoon when we finished our hike and the chikas wanted lunch so we drove down the mountain to a picnic area where we considered our next lag of the trip. Hiking by Mount Shasta would be saved for a different trip- we decided to drive through the Lower Klamath National Wildlife Refuge and look for birds. The next day would be our last of the spring break trip and we had plans to visit the Lake Shasta Caverns.