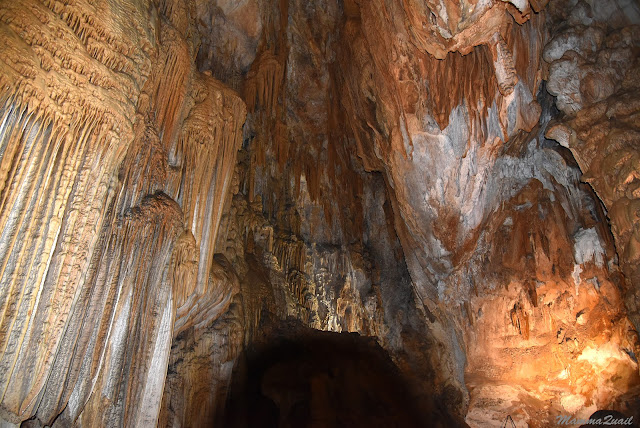 Of Lake Shasta Caverns I found out on a family travel forum online and immediately added it to my Wanna Visit There list. Last April, at the tail of our family spring break trip I finally got the chance to incorporate this cave into our itinerary. It was the last day of our trip, after exploring the Klamath River area and a bit of Southern Oregon, we have returned the to California through the Lower Klamath NWR and passed the night in the town of Lake Shasta. Packing early and efficiently, we managed to arrive at the caverns visitor center in time to buy tickets for the 10:00 tour.
The cavern tour is guided group tour. It begins with a ferry ride on Lake Shasta to the other side of the cove. 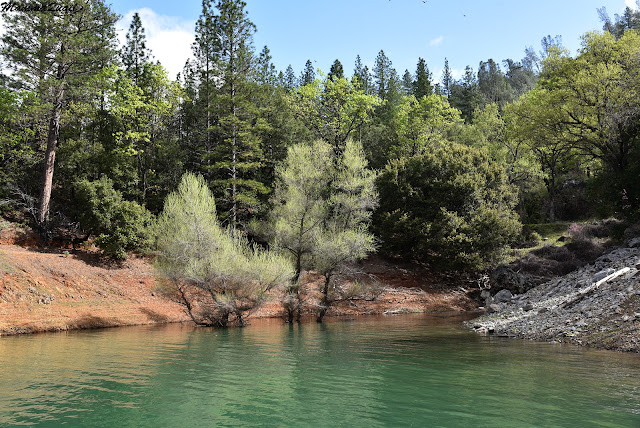 Lake Shasta is the largest man-made water reservoir in California. Besides storing water and driving the dam's hydroelectric power plant this lake is also a fine recreation area. 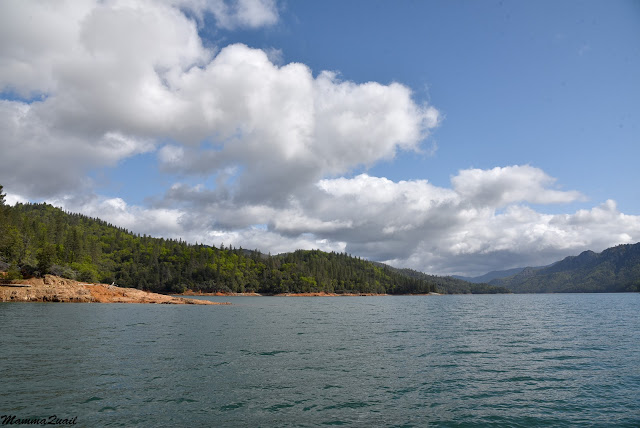 The ferry ride was short but long enough to enjoy the sight of the lake at surface level. The water surface has already receded, exposing the rust-colored soil between the green forest and the emerald-colored water.
Pappa Quail had left his camera in the car but the elder chika had taken her small one and took photos of occasional birds she saw, including a great blue heron that was standing on a structure in the water.
The ferry deposited us on the other side of the cove where two tour busses were waiting to take us on the narrow uphill road leading to the cave mouth. There's no other road leading to the cave.
The cave was found in 1878 by a federal employee who explored the area. A path was made from the lakeshore to the cave mouth and cave explorers and spectators started visiting it on a regular basis. Now we were riding a tour bus following the very same path.
I sat on the right sight of the bus and the view from the windows was spectacular. The bus did not stop but I did take photos through the wide, clear bus windows, as did many others of the group.
To the right side of the photo, just before the lake view disappears behind the tree, allowed cove is visible. That is Bailey Cove, behind which the cave visitor center is located - where we had boarded the ferry. The adjacent peninsula has a beautiful hiking trail called the Bailey Cove Loop, a trail I'd hike twice later that spring.
After getting off the bus we had some time to look around. Then our guides gave us an introduction and led us to the cave's modern entrance. 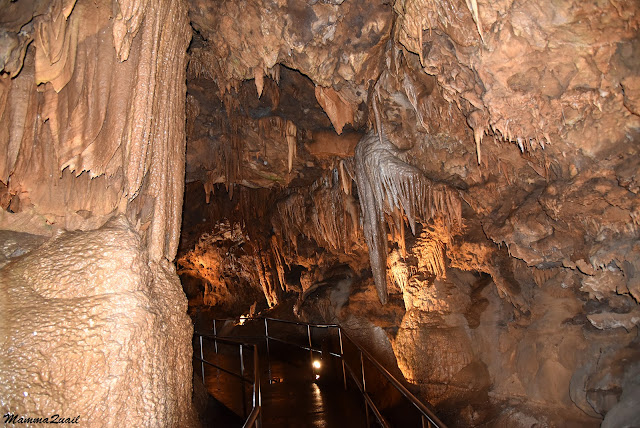 While not of marble, the Lake Shasta Caverns cave is no less pretty than the Oregon Cave we've visited two days earlier. 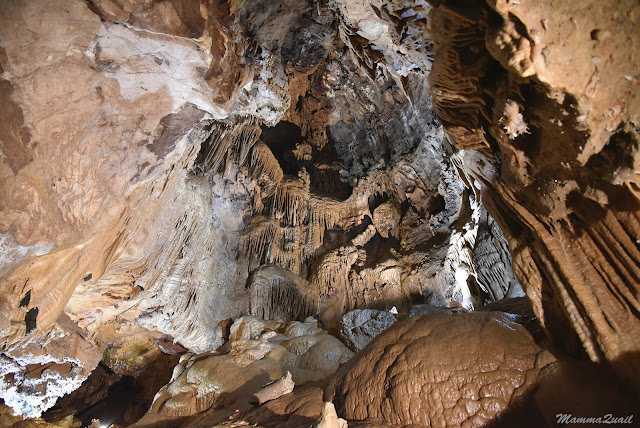 Fantastic rock formations drooped from the cave's ceiling and walls, and grew from its bottom. 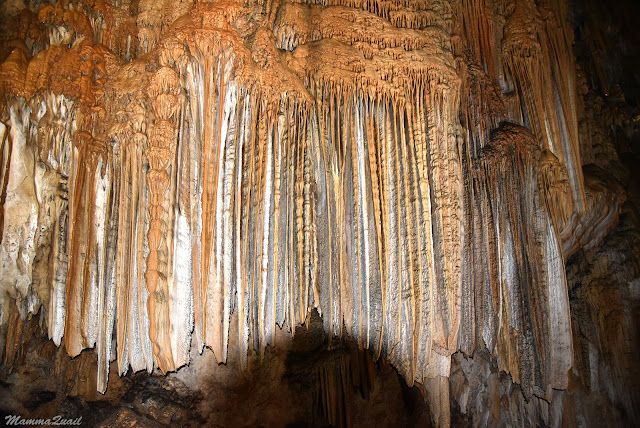 Some of the formations are more rare than the common stalactites and stalagmites. This straw-like formations are seen in only few caves and are localized in only a few spots. 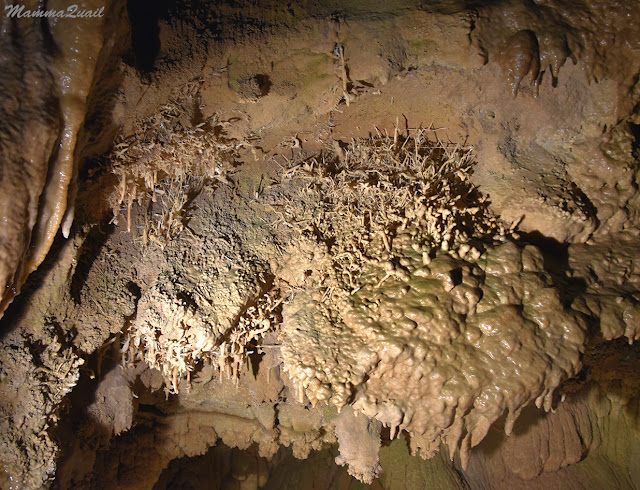 The guide led us along the path, stopping here and there to tell the cave's story. She also did the now familiar cave tour routine of turning off all lights to experience total darkness. This sensation never gets old. 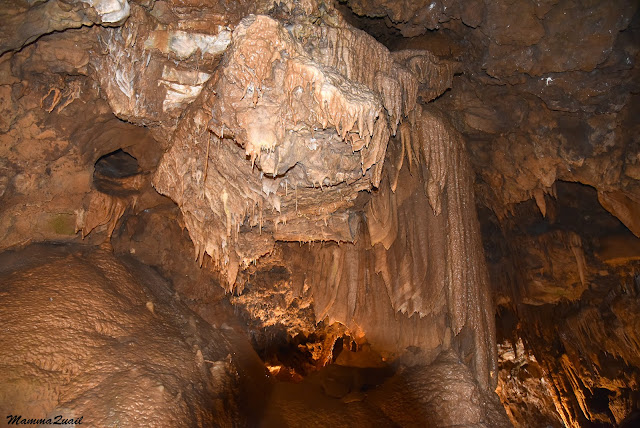 No plants grow in total darkness, but ever since people have been exploring this cave, it is no longer in total darkness. Throughout the day when tours take place, the cave is illuminated with electric lights. The presence of light, together with the moisture and minerals make it possible for algae to grow on the rock formations. 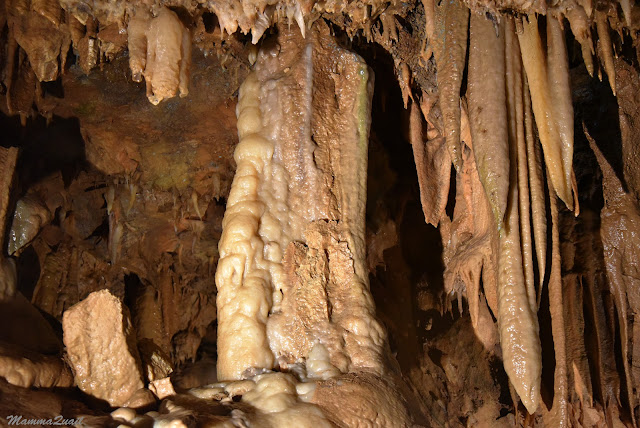 I tried getting a good close up photo of the algae but my elder chika did a better job of it:
We didn't encounter any other life in the cave - no bats or spiders. Just the beautiful, living rock. 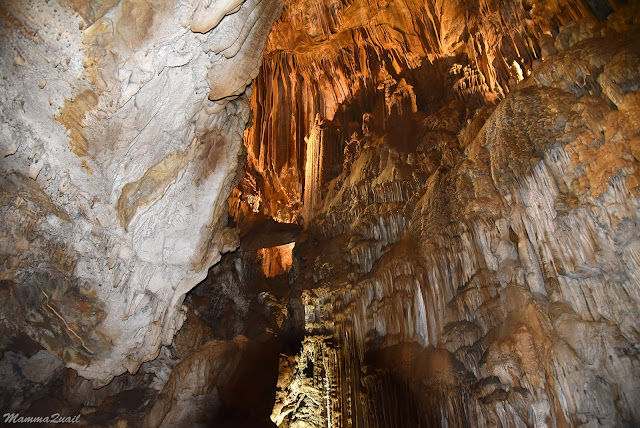 We exited the cave through its natural opening. After adjusting to the light outside we filed along the stairs down to the little exhibit room and bus stop. On the way I took the chance to examine the local vegetation.

I also had some time to check out what was blooming near the bus stop. I've already seen some very interesting flowers along the road but I knew that the bus wouldn't stop for me to take a close look at them. I hoped that they'd bloom below by the ferry dock too.

The clouds gathered while we were inside the cave but it didn't look like it was about to rain. Not yet, anyway. 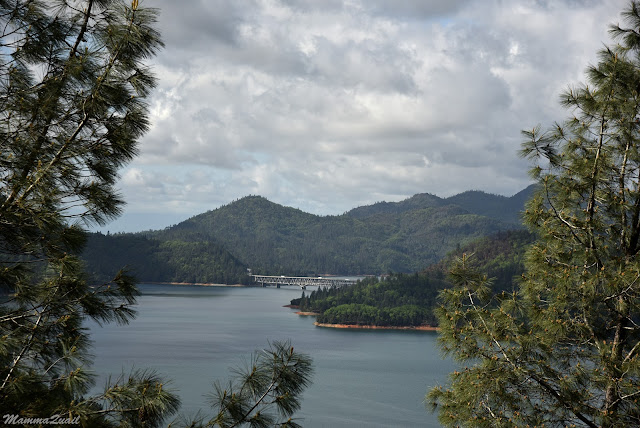 By the ferry dock below I had some time to look around before boarding the ferry on the way back. Redbud trees bloomed along the road and a large rock behind the dock was seeping water from springs above it. It was very beautiful. 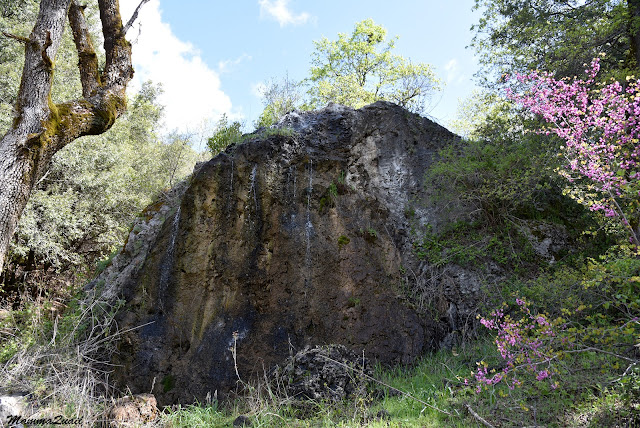 Pappa Quail directed my attention to red dots on the side of the big boulder - canyon larkspur flowers. A fluttering motion by the flowers grabbed my attention - butterflies were feasting on the elongated red blossoms.

I would have liked to get an even closer look but then I heard Pappa Quail calling me - the ferry was loading our group for the ride back.
I got to see another butterfly on the ground just before going on the dock. Later on that day, at the Sacramento River Bend Nature Area, we would see many more butterflies :-)